For fans of Standard, last weekend was a big one, as two major events went down: Grand Prix Louisville and StarCityGames Seattle. Combining data from these two events as well as Magic Online Premier events led to some interesting results, particularly once I started computing win rates for the popular decks. Letâs first look at what the overall metagame looks like: 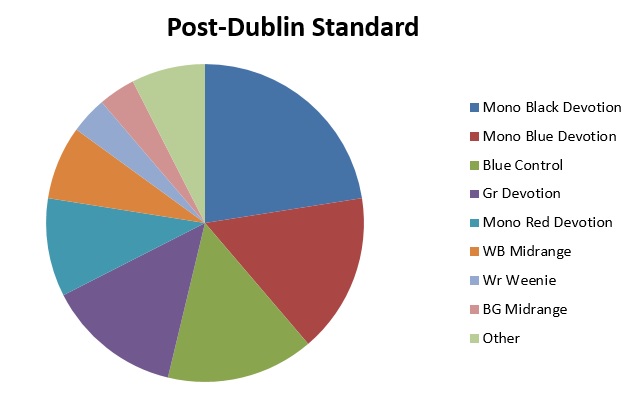 Youâd think the top deck being mono-black devotion has a lot to do with the three copies of it in the Top 8 of Louisville, but itâs actually a very popular deck online as well. One thing to take note of is that this is a highly focused metagame. Mono-black devotion, blue control, G/r devotion, and mono-blue devotion collectively account for over two thirds of the best-performing decks, and there are very few rogue decks. When designing your sideboard, you should be aware of this. Also of interest is the near-disappearance of G/W aggro.

Before delving into win percentages, Iâll break down a few of the top decks. last week I discussed mono-blue devotion, Esper control, mono-red devotion, and G/r devotion, so I wonât go over them again here.

The big breakout success was the mono-black devotion deck that Todd Anderson designed and Brian Braun-Duin won the Grand Prix with. Hereâs the list:

Donât let the Temples confuse you, this is a mono-black deck. Braun-Duin plays them strictly for the scry ability. Unlike mono-blue devotion, this deck isnât really about curving out into your devotion cards. Yes, it does play Nightveil Specter, but it isnât critical you maximize your devotion by turn four or five. The early game plan is more about neutralizing your opponentâs threats, whether with a Thoughtseize or with the package of efficient removal spells. Then, you play a giant, flying Demon or start to pull ahead with Underworld Connections (or both). The late game is where your devotion matters, as you can burn your opponent out with Gray Merchant of Asphodel. Thereâs a cute interaction with Pack Rat that most people know, but Iâll explain it here for the sake of completeness. Unlike most tokens, which donât have mana costs, Pack Rat tokens are exact copies of Pack Rat and thus will add to your devotion. Since you will often be drawing multiple cards per turn, a late-game Pack Rat will almost ensure that you will have enough devotion to do what you need to do.

Next up is a Desecration Demon deck of a different flavor:

Doberne piloted this list to a second-place finish in Seattle, and itâs similar to Paul Rietzlâs sixth-place deck at Pro Tour Theros. This version has a lot more spot removal, with the main piece of new technology being the Banisher Priests. I think thatâs the right way to go with this deck in the wake of mono-blue devotionâs success, but going forward as the format shifts more toward creature-light strategies, going back to main-decked Sin Collectors might be the way to go. It really depends on what sort of decks you expect to face. While this deck leans more on the power of individual cards than any synergies, the interaction between Whip of Erebos and Obzedat, Ghost Council is absurd. If your opponent somehow manages to kill your legend, you can reanimate it with the Whip. At the next end step, both cards trigger, and you can stack it in such a way that the Obzedatâs ability resolves first. This way, it will come back on your next upkeep with no memory of being whipped back to life. When you have this combo online, nothing short of an instant-speed exile or graveyard removal will permanently get rid of your Obzedat. And itâs not as though Whip of Erebos is bad without the Obzedat; I hear giving Desecration Demon lifelink is pretty good, too.

If balls-to-the-wall aggro is more your style, I have a deck you should try out:

Herrel finished a heart-breaking ninth in Louisville, missing the Top 8 by only a fraction of a percent on his tiebreakers. He was an unfortunate casualty of the modified playâdraw rule, as he was dream-crushed by Sam Black in the last round. You canât even blame Black for doing so, as he was guaranteed to make Top 8 even with a loss. In his position, I probably would have done the same thing. Herrelâs main deck is actually identical to Ross Merriamâs deck from StarCityGames Worcester from a couple weeks ago. I said this deck was a good choice when I initially saw it, and it seems thatâs still the case. Herrelâs only other loss was to an Esper control deck, so the Boros Legion is definitely a contender.

Now letâs look at how well these decks actually performed. The following table was compiled by looking at win rates of the popular decks in their Top 8s. Iâve also cobbled together other data by looking at the last couple rounds of each tournament. Note that this doesnât represent each deckâs overall win rate, merely how well they do in the elimination rounds (and to a lesser extent the last couple Swiss rounds).

As you can see, mono-black devotion was the best-performing deck by a fair margin. It did especially well against both G/r devotion and mono-red devotion, in both cases winning multiple times. The worst matchup ex post was mono-blue devotion, but I suspect itâs not as bad as what the numbers show.

The only other decks with a higher than 50% win rate were blue control and W/r weenie. The biggest surprise to me was blue control consistently beating mono-blue devotion. From watching the Pro Tour coverage, I had been under the impression that Game 1 favored the control deck, but after sideboarding, the matchup was heavily in favor of mono-blue. The results say otherwise. I can think of two explanations for this. One, control decks have adapted their lists to better fight against mono-blue; and two, control players have a better idea of what to expect against mono-blue and consequently play better. On the other hand, blue control fared poorly against mono-red and mono-black, as expected.

I donât have a ton of data on the W/r weenie deck, but at first glance, it has been performing quite well. Its best matchup is mono-red, which has traditionally been the case, but you have a reasonable chance of winning other matchups as well.

The last thing I want to point out here is how badly the G/r devotion deck performed. Its matchups were at best 50/50, and in many cases, it failed to win a single match. It was especially abysmal against mono-black and mono-blue, losing multiple matches in each case. If thereâs one thing you should take away from this article, itâs that you shouldnât play G/r devotion if you actually want to win the tournament.

I hope that analysis was helpful to you in deciding what to play at your next Standard tournament. Iâll conclude with this weekâs Top 8 Theros Cards.

Take care, and Iâll see you guys next week.