Today, Iâm going to focus on the Standard portion of the event. Unlike normal tournaments, the small number of competitors allows me to do a much more thorough analysis. If you havenât already, I suggest you go check out the decklists.

You might want to open it in a new tab, as Iâll be referring to it frequently throughout this article. 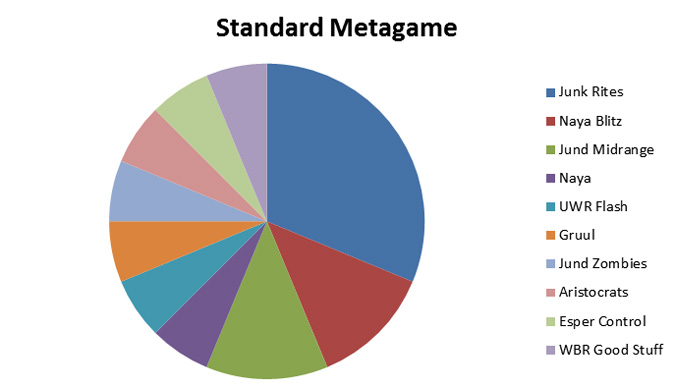 Junk Rites was the only âpopularâ deck, with five players choosing to battle with it. Every other deck only had one or two players. So, how good are these decks really? We can take a look at each deckâs win percentage and how it did in specific matchups. I have it all below in a nice table:

The blank spots correspond to either mirror matches (which are fifty-fifty by definition since there are no draws on Magic Online) or matchups that never took place. As you can see, the best-performing decks were Jund midrange and The Aristocrats, mostly on the backs of Reid Dukeâs 4â0 and Sam Pardeeâs 3â1 results, respectively. Another strong deck was Naya Blitz, which took Jorge Pinazo to a 3â1 record and to a sixth-place finish overall. The most popular deck, Junk Rites, had somewhat underwhelming results. Even the eventual winner Dimitri Butakov only managed a 1â3 record with the deck. This can mostly be attributed to the fact that it was the only deck that had more than two players playing it, so the results are a bit more spread out. Letâs look at the top four decks in a bit more detail.

Reid Duke has been championing the heck out this deck, and his results certainly show it. He recently made Top 4 at Grand Prix: Quebec City, where he fell to Nico Christiansenâs Naya Blitz deck in the semifinals. With the rising popularity of this hyper-aggressive deck, letâs look at how Duke updated his trusty weapon for the Magic Online Championship:

â1 Bonfire of the Damned

+1 Bonfire of the Damned

Ground Seal is a card Iâve been wanting to see play in Standard for a while now. It was a highly effective, albeit narrow, sideboard card of yesteryear, and Iâm looking forward to dusting off my original Odyssey copies. Iâm sure Duke would prefer to use Relic of Progenitus or Nihil Spellbomb, but this is the only graveyard hoser that also cycles in Standard at the moment. The only bad thing about it is that it doesnât shut off cards with flashback such as Lingering Souls, but you canât have it all I guess. I do like the main-deck inclusion since at worst, you can just cycle it.

Dukeâs other changes reflect the increase in speed of the format and the trend away from Boros Reckoner. Murder happens to be the best targeted removal spell that kills Boros Reckoner. Itâs pretty bad otherwise due to its relatively high cost, so cutting one makes sense here. Ultimate Price is also at an all-time low because there are so many good multicolored creatures running around. Tragic Slip is where you want to be right now: Itâs cheap, and itâs not hard to get it to kill anything you want.

Despite all of the changes designed to fight Junk Rites, Jund only managed a fifty-fifty record against it while going undefeated against every other deck. Junk Rites is probably this deckâs worst matchup, so I would advise against playing Jund if there are a lot of Unburial Rites in your metagame. Liliana of the Veil is particularly bad here since the opponent usually has a 1/1 Elf or Spirit to sacrifice and can have Loxodon Smiter after sideboarding. Your best cards in this matchup are Ground Seal, Grafdigger's Cage, and Slaughter Gamesâbasically cards that mess up the graveyard plan. Remember that you can still die to the opponent hard-casting his Craterhoof Behemoth or Angel of Serenity, so donât skimp out on the removal either. Olivia Voldaren also does a pretty good job of making sure you win the game once you contain the opponentâs explosiveness.

I can think of a couple jokes here, but none of them are remotely safe for publication. If youâre not familiar with it, itâs basically a W/B/R Humans deck that plays cards such as Champion of the Parish and Silverblade Paladin. The deck gets its name from Cartel Aristocrat and Falkenrath Aristocrat, which work well with Doomed Traveler, Skirsdag High Priest, and Zealous Conscripts. Itâs been a part of the Standard metagame since Tom Martell won Pro Tour: Gatecrash with it last month. Letâs see how Sam Pardee has updated Martellâs list:

â1 Mentor of the Meek

The major change is one I alluded to earlier: the trend away from Boros Reckoner. Pardee decided to cut them entirely in order to go up the full four copies of most of the other creatures in the deck. We again see the rise of Tragic Slip, as Pardee is playing a full four of them between his main deck and sideboard. They are particularly good in this deck because of the full complement of sacrifice outlets, which make enabling morbid that much more consistent. Threaten effects also work particularly well in this deck for the same reason, so I quite like the two Mark of Mutiny and the third Zealous Conscripts in the sideboard. Stealing a Thragtusk, attacking for 5 and making a 3/3 Beast is just dirty.

Pardeeâs overall record was 3â1, only losing to Reid Duke. Notably, two of his wins were against Junk Rites. The Threaten effects again play a role here, as being able to steal whatever huge threat the opponent reanimates can swing things back in your favor. This is of course assuming the playerâs doesnât just kill you outright with Craterhoof Behemoth. The Aristocrats definitely has some sideboard options for this matchup, with Pardee opting for a package of Purify the Grave and Rakdos Charm. Martell was playing Rest in Peace in his sideboard, but that is a bit of a nonbo with Lingering Souls. Thereâs also nothing preventing you from playing Slaughter Games, though I suspect it is probably too slow here. The reason itâs better in Dukeâs deck is that he can play it a turn earlier off an Arbor Elf or a Farseek.

I saw this picture on Reddit a few days ago with the caption, âIâll Keep.â

I can think of few decks scarier to play against than this one. Times are tough indeed for the draw-go decks when they canât even Wrath of God on turn four because itâs too slow. Jorge Pinazo was the better-performing of the two Naya Blitz players, so letâs see how he updated Nico Christiansenâs GP: Quebec Cityâwinning deck:

+2 Flames of the Firebrand

Pinazo didnât make any huge changes to the deck, but I do approve of the few he did make. Giant Growth is almost never playable in Constructed, and moving the Thalias to the main deck makes a crazy amount of sense. The Flames of the Firebrand seem as though they would be pretty good in the mirror, and they happen to be decent against other decks with many small creatures such as The Aristocrats. If this deck has a weakness, itâs that itâs very much an all-in deck. You are at the mercy of your draws, and the longer the game goes, the worse it is for you. If you like high-risk, high-reward decks, though, this is where you want to be.

Naya Blitz performed well across the board, but it did struggle against Jund, posting a 0â2 record. Jundâs large amount of cheap removal combined with comeback cards such as Thragtusk and Huntmaster of the Fells puts a lot of speed bumps in the way and prolongs the game. Aggressively mulliganing is a key to success with this deck, as you really canât keep hands that durdle around and donât do anything until turn three. You take the risk that youâll mulligan into oblivion, but you to accept one thing: You live by the blitz, you die by the blitz.

Finally, weâll look at public enemy number one. Mike Krasnitski recently won Grand Prix: Verona with this deck, and itâs quickly become among the most-played decks in Standard. The main game plan is to dump a lot of cards into your graveyard with Grisly Salvage and Mulch until you find an Unburial Rites. You can then cheat a huge threat like Craterhoof Behemoth or Angel of Serenity into play. And oh, by the way, Plan B is Restoration Angel and Thragtusk. I hear thatâs pretty good, too. Even though Dimitri Butakov won the event, Iâd like to shine the spotlight on his opponent in the finals, Malte Holm. Holm performed much better in the Swiss (3â1 to Butakovâs 1â3), and I think his list was significantly better. Not to take anything away from Butakov, but he drew the nuts in Game 1, and Holm mulliganed to five cards in Game 2. So, letâs see how Holm updated Krasnitskiâs deck:

Holm decided to eschew the Restoration Angels completely, deciding to focus more on the combo. Somberwald Sage makes this deck both incredibly explosive and much less reliant on Unburial Rites. A turn-four Angel of Serenity is no joke. I also like that he went up to twenty-four lands. I find that a lot of decks these days are unnecessarily greedy when it comes to their mana. I know that you really want to play that cool one-of in your deck, but the best change I can recommend to most lists I see is adding a land.

Other than that, this deck is very powerful, and thereâs a reason it was by far the most-played deck. As I said before, it has explosive draws, but it also has a great long game since it eventually starts hard-casting all of its boom-booms. Its biggest weakness is the existence of really fast decks such as Naya Blitz. Craterhoof Behemoth is a lot less exciting when itâs on defense. It also performed poorly against The Aristocrats and Esper control. I wouldnât worry so much about the latter since Esper control has fallen out of favor, but as I said earlier, The Aristocrats both puts you on a fast clock and is capable of stealing your huge threat for a lethal attack.

The econometrician in me is screaming, âInsufficient sample size!â but due to the quality of the data I have here, I can ignore that for now. I think any of the four decks Iâve highlighted here is a great choice for Pro Tour Qualifiers and Friday Night Magics. All four have their strengths and weakness, so itâs a bit of a rock-paper-scissors metagame. Pick the deck that suits your play style the best, and practice the heck out of it.

Good luck, have fun, and see you next time.