It's been a little while now, but I thought it fitting to start bringing back some Classic Commander - the format that predates made-for-Commander cards using New Phyrexia backwards! The variation of Commander has really become a favorite of mine over the last year as it lets me reminisce about my early days with the format. I get to talk about Commanders that my friends and I would bust out in my college years or would otherwise dream of playing. It lets me tell stories and explore some spaces of gameplay that a lot of current players don't know too much about.

This week we're talking about one of my favorites: Ertai, the Corrupted. 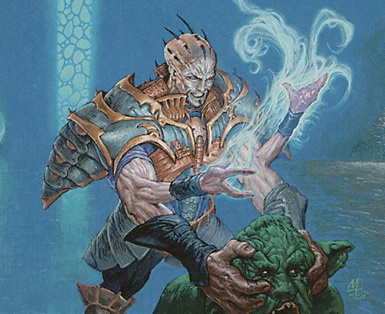 I always loved Ertai. When I started playing around Urza Block, I got a lot of exposure to Ertai as a character thanks to the Tempest Block (aka The Rath Cycle). His scruffy looking design and constant wisecracking made him into a quick favorite. Then over the next few years, he showed up in Nemesis, and was a major part of that set's story. In the events that followed, he was Phyrexianized and turned into the monstrosity of Ertai, the Corrupted by Planeshift.

The long and short of it is that Ertai was a wizard brought on by the Weatherlight and their adventures. When they entered Rath, Ertai was tasked with opening a portal that would allow them to escape the artificial plane. Eventually he was able to get it open, but in the Weatherlight's rushed escape from the world, he was left behind. Alone, angry, and resentful at his abandonment, he was taken prisoner in the Stronghold until it came time to determine Volrath's successor as evincar. 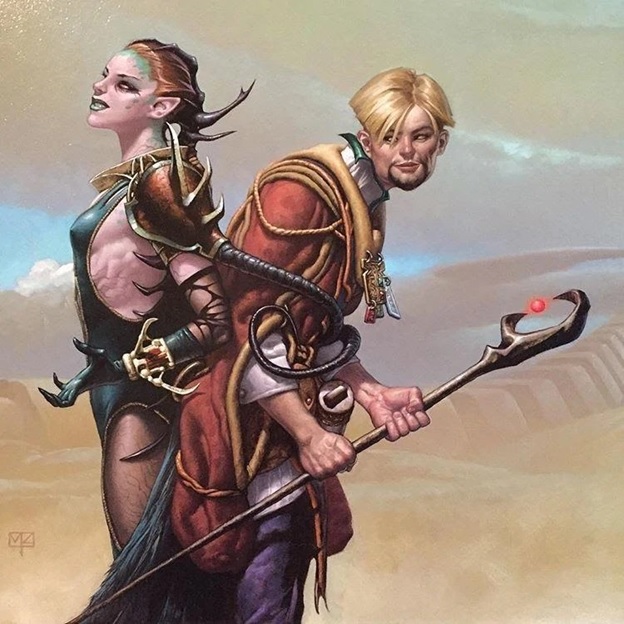 He was to go against Crovax and Commander Greven il-Vec for the title of evincar. The Phyrexianized elf Belbe - who was made from the body of elf princess Avila, the daughter of Eladamri - was to oversee this contest and would determine who would earn the title. With time, her and Ertai would form a bond and a loving relationship with one another. Eventually, Crovax would grow too strong, ferocious, and hostile and established a coup to make himself the acting evincar.

Belbe died soon after as Eladamri stormed the Stronghold, and Ertai - embittered by his abandonment, capture, and loss of his love - gave in to Crovax. He became Phyrexianized and joined the Predator warship to capture Gerrard and, by chance, the goblin Squee. There, Squee was granted immortality so as to be a play thing to be killed over and over again for Crovax's amusement. Ertai also delighted in killing the goblin over and over again, to the point that it ended up doing him in. Squee accidentally overloaded the machine that would heal him, causing an explosion, which killed Ertai and allowed Squee to escape.

This last bit involving Squee is what influenced Ertai's Planeshift legendary card, and serves as the basis for the deck. When I built Ertai in college, it was meant as a way to shut people down. Players in my college group and the groups I'd run into at local shops had begun getting a lot more combo heavy. Ertai was a deck I designed to act as a way to put a stop to players' shenanigans. This, of course, worked with Ertai's ability to sacrifice and counter things, but also played with other effects to counteract whatever your opponents were trying to do.

The result was a deck that looked similar to this:

The concept is simple: find as many ways to say, "screw you!" as possible. The basic premise with Ertai himself is simple enough: find a bunch of ways to fuel his countering tendencies. There're some great ways to do it with repeatedly returning creatures such as Reassembling Skeleton, Bloodghast, and Nether Traitor, but there's also a bunch of excellent token makers too. Bitterblossom and Emeria Angel are classics of token creation, but the less known Lullmage Mentor is an absolute all-star here. Whenever you counter a spell, you make a token, and you can then sacrifice that token towards countering a spell, thereby keeping an infinite chain going.

But sometimes you need a little more to stop your opponent's nonsense, and there's a lot of good ways to hate on what your opponent is doing. Leyline of the Void exiles graveyards, Ulamog stops mill (and acts as a win-con), Grand Arbiter Augustin IV makes it harder for your opponents to play stuff, Linvala stops creature abilities, and Worship means you can't take lethal damage. There's also a myriad of ways to dissuade combat damage in general thanks to Ghostly Prison, Propaganda, Norn's Annex, and so on. You can even use Teferi's Puzzle Box to ensure your opponents can't settle on any one way to win, making it harder to assemble a combo or powerhouse play.

The cool thing about these is that there's a ton of versatility in hate options that you can run. In fact, I had a lot of trouble cutting about 30-40 cards from my initial card pool just to make it work here! Cards like Meddling Mage, Pithing Needle, and Runed Halo can be very good if you're trying to hate something very specific, but I opted to keep them from the main initial list here. If you know exactly what you want to put a stop to, then try out things like that. You can also play cards like Sadistic Sacrament or Bitter Ordeal to just preemptively get them out of your opponents' decks entirely.

Now don't get me wrong, I love this deck. However, I do also think it's not one you should rely on too much. It's meant to do a very specific thing: hate out problematic decks. It's a way to kind of rein in your opponents and humble them a little. Bring them back down to earth and get them to play a little more fairly. If it becomes too much for the playgroup, it's probably best to try something else. And it just so happens that I actually have another list for you to try! There's a bit of a story to this one, though, so bear with me.

You may not be aware of this, but I actually have a list lying around of Commanders I selected to write about based on these old memories. Things that evoke tales of a bygone era and cool legendary creatures from Magic's past. Every now and then I go through it to find something awesome to write and talk about. Now, what you may not know is that at one point I originally intended for my Classic Commander pieces to have not one but two lists to talk about. The idea was that I would talk about an older list that was relevant for players looking to play this older style of Commander and provide a similar yet different list for modern day Commander.

For most of my articles, that didn't pan out quite the way I wanted. Building these lists takes time, and I only have so much in a week between a typical job and some side gigs (including these excellent pieces). However, before I got started on this Classic Commander list, I actually stumbled onto another list on Magic Online - which I use to make all my Commander lists. The list was labeled "Classic - Ertai Revamped," so I opened it up and, uh...well I'll let this one speak for itself.

This deck looks nothing like what I was doing and always wanted to be doing with Ertai. When I built Ertai in the past, it was exactly as I explained above: a control deck meant to shut down combo players from doing their nonsense. So why this? It's like a completely different deck and strategy. This is basically zombie tribal except when it's not, and there's some clear omissions too. No Bitterblossom, Grave Titan, or even a planeswalker like Elspeth or Liliana feels really strange. What the hell is going on here?!

What's even weirder is that the newest card I can find here is from Kaladesh. That means that me making this list likely predated my article writing, which started around the release of Rivals of Ixalan. The only explanation I can have for this is simple: I made this around the time Kaladesh released - likely while recovering from a major surgery I had around that point in time - and later rediscovered it later. I then relabeled it, meant to come back to it, and just... forgot about it.

So here it is: a more modern yet somewhat budget-friendly list (a few cards have gone up a lot in the last few years) that can act as a template for a different take on Ertai. The goal is still similar, after all. You're just less all-in on that controlling strategy and are more focused on zombies. As it turns out, though, zombies make great fodder to Ertai himself to sacrifice with. That in turn makes this work quite nicely, just very differently. I'd just suggest you look around and give him a few modern day quality-of-life improvements like pathways or the Innistrad slow lands as well as some more controlling effects. And for heaven's sake: get some more mana rocks in there!

Whichever way you want to play, though, Ertai is a really sweet legend with a really powerful effect. He's a super sweet Commander and one I'd highly recommend checking out for both Classic Commander play as well as the more modern style of the format. He's a great way to control things, shut down shenanigans, and take you to victory in your pod! Give him a whirl at your next Commander night and don't be afraid to tell your friends, "NO!"