Boris chuckles, laying out another Island. "I'm supposed to be judging," he says. "But you can't judge a tournament without players."

"I was expecting at least some people to show up this weekend," you say.

Boris laughs again. "My nephew's part of a gaming club at school," he says. "He gets all the cards I don't use, and I make them a few pre-built decks on the side. The kids love them, but I need to test them first."

As he says this, Boris taps three lands to cast a Soaring Show-Off, and draws a card from it. You add an Aviary Mechanic to your hand, wondering exactly what it's supposed to do for you.

"That's the guy looking through the singles binder, right?"

"Yeah. It's his idea of a combo deck: He found a couple of cards that he thought worked really well with each other, got four copies of each, and then filled it out with whatever random cards he had at the time."

"So what's the combo supposed to be?"

Boris does a few calculations in his head and gives you a puzzled look. "It feels like years since I've been here playing a Constructed deck, but could you tell me how that's supposed to work?"

"He says that they're supposed to be combined with things like Twinning Glass. That lets you cast the Ignus twice in one turn, and get something like 4 mana for the price of three."

"CJ isn't much for long-term thinking," you admit.

Boris taps another three lands and plays the card he's just drawn. "I'll cast Ichor Slick on your Voltaic Servant," he says. "Are you using your Judge's Familiar in response?"

You shake your head and drop the Servant into your graveyard. "You've got mana to spare," you say. "Besides, it's not really a big loss if I can't cast anything."

"You did get Etali, Primal Storm into play last turn," Boris points out.

"Yeah, but I have six lands on the table. I didn't even need the Ignus to cast it."

"It's all right, you'll figure out something. Your turn?"

You untap your permanents, wondering what kind of victory conditions CJ worked into his deck. Etali, Primal Storm definitely makes for a huge attacker, but it can't possibly be your way to winning this game.

Your questions are suddenly answered when you draw an Approach of the Second Sun. At first you're completely elated at having found a way to win. Then your eyes narrow, and you start wondering why CJ would choose this particular victory condition out of all possible victory conditions.

Mari pulls up the seat next to you. "I see he pushed that deck on you too," she says.

"I didn't win a single game," Mari says. "CJ really needs to figure out what it's supposed to do aside from get additional mana."

Boris and Mari shake hands. "Your friend's about to crush me," he jokes. "Here it comes."

You shake your head. "Were you able to cast Approach of the Second Sun when you were playing this, Mari?" you ask.

"Well," you say, "I'm about to go for an Approach of the Second Sun win. Want to hang around for my next seven turns or so?"

"Why wait seven turns?" she asks. "You can probably do it in one."

It is the start of your first main phase. Defeat Boris before the beginning of his next combat phase. 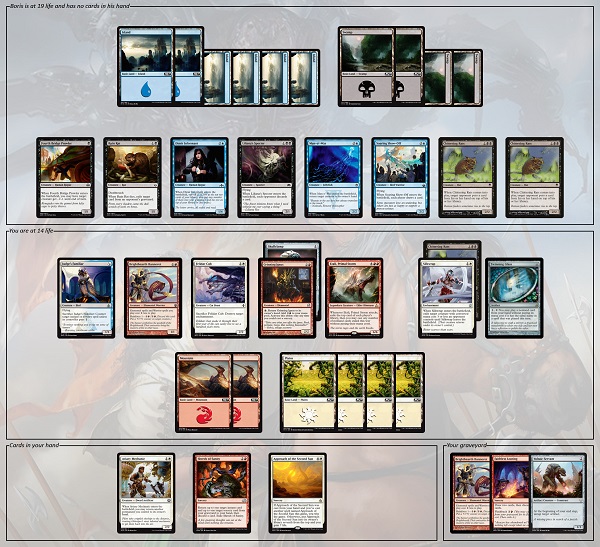 You are at 14 life, with the following cards in play:

Boris is at 19 life and has no cards in his hand. He has the following cards in play:

If you think you've got a great solution in mind, don't put it in the comments! Instead, send it to puzzles@gatheringmagic.com with the subject line "Puzzle - Sunrise, Sunset" by 11:59 P.M. EST on Monday, March 11, 2019. We'll include the best ones in next week's article along with the next puzzle!

"This is quite the board state," Ryou Niji writes, "but what really matters is our False Prophet, whose ability could clear the board... and with the help of Outpost Siege on Dragons mode, deal quite a few points of damage too. That's actually already very good, but if we want the win this turn, we need the trigger of Demanding Dragon for some extra damage. Of course, a more immediate problem is that we have few ways to actually touch our own False Prophet, and if we use the aforementioned Outpost Siege triggers on it, we are 1 damage short... or are we?"

"The key here is to deal enough damage with Outpost Siege (which, it's important to note, is a leaves-the-battlefield trigger, and not a death trigger) and Demanding Dragon," Kirk Maijala adds. "This means that we need seven Outpost Siege pings to win, and with only eight creatures, we can only use one ping to get where we need to be:

"Since we can't (easily) attack with False Prophet, and we can't use up two of our pings to kill it - as that will leave us one short of lethal - we'll have to use the opponent's thresholded Gloomdrifter to get there."

This approach uses a lot of triggers, but indeed gets there. One observation is that your opponent ends up at both Delirium and Threshold from Michael Feldman's solution:

It's worth noting that Raquel's Penumbra Spider doesn't help her here: The Spider's ability triggers when it dies, but False Prophet exiles all creatures.

Then again, the Angel of Condemnation gives you access to one additional wrinkle: If you use the Angel to exile one of your own creatures, then return that creature to play and remove it once more, you can squeeze two Outpost Siege triggers out of it. As Micah Young notes, all you then need to complete this scenario is a creature with a sacrifice ability:

One variant to this solution actually uses the Angel's ability only once, with Demanding Dragon: You attack with the Angel of Condemnation, then tap Anointer of Champions to make it a 4/4 creature and animate Hidden Predators. This lets False Prophet wipe the table completely, and you can then cast Valorous Stance on your returning 5/5 Dragon for the win.

"Even after finishing the solution," Matt Bocek adds, "it's still seems plausible that your opponent might know exactly what she's doing - or not. After all, she could have played Hidden Predators before combat for a guaranteed creature. Did she hold it to try and sneak a creature past the board wipe from False Prophet? Or did she just hold it bluffing a combat trick?" We might never know... and it's the little things like these that can drive you nuts.