Editor's Note: Whoops! We left out a card from the original version of this puzzle. That card has now been restored below.

"I really hate your deck," you mutter. "You know that, right?"

With your local game store's Unabridged Cube online once again, you figured that it would be nice to sit down and go into familiar - yet at the same time, unfamiliar - territory. The Unabridged Cube is a collection of cards that somehow contains one of each card ever printed, and today you used it to cobble together a passable

deck. Unfortunately, someone else used the opportunity to build themselves one of the stronger

decks in recent memory... and as luck would have it, she's sitting across the table from you right now.

You glance at your scorepad. "That's the exact amount of life I have left," you admit.

"Really?" Amina says in mock surprise. "What am amazing coincidence!"

To be honest, Amina's position seems rock-solid: She's drawn into consecutive flying creatures, dropped a Pacifism on your lone flyer, and used a Serra's Blessing to hold her own line. Put simply, she's got you pinned down, and has now positioned herself for the inevitable kill.

You glance at your Whalebone Glider. Right now the old artifact is the only thing keeping Amina from an outright win, but you have to decide what to use it on.

"Your target for the Whalebone Glider," Amina notes. "That's the only way you can survive my attack."

You think for a while. "If I use it on my Mobile Garrison," you say out loud, "the only attacker I can reliably block and kill with it is your Exultant Skymarcher. That puts me at one life after damage. If I use it on Sidisi's Pet, though, I gain one from lifelink, and go to two... but you still have all three flyers."

"Not so much," you say, tapping the Glider and pointing it at your Sidisi's Pet. "I'm going to get eaten alive next turn anyway, so I'll go for the higher life total and pray for removal."

You panic for all of a single moment, but then catch yourself just in time. "In response," you say, "I'll tap Sidisi's Pet and Night Market Lookout to crew my Mobile Garrison."

Amina looks at you curiously for a moment, and then laughs. "I see," she says. "Very clever. I didn't see that one."

"So the Lookout drains you for one?"

"And I'll go to seven," you say. "Then I'll take six damage from your attackers, and go down to one life."

"I can't believe I didn't see that. Too bad you're only going to last one more turn."

Amina casts the last card in her hand - a Water Servant - and passes the turn to you. "Truth be told," she says, "I'm not even sure what kind of removal you'd draw at this point that can help."

Surprisingly enough, your deck actually does offer up a removal spell. However, the Wild Slash you draw is a bit lacking - it clearly won't be enough to take down any of Amina's flyers, and even then you won't have enough blockers for the rest.

All this leads up to one conclusion, though: You have to find a way to win the game before your opponent finishes you off. Amina may have the stronger deck, but you obviously have a better grasp of the subtleties, and maybe it's the right time to take this fight to her home.

It is the start of your first main phase. Defeat Amina before the beginning of her next combat phase. 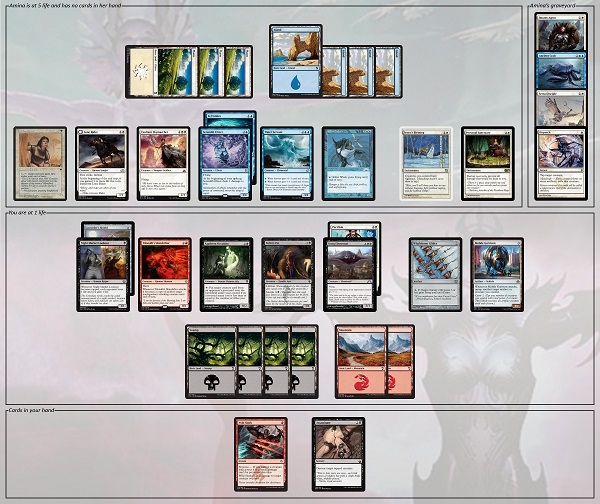 Amina is at 5 life and has no cards in her hand. She has the following cards in play:

Amina has the following cards in her graveyard:

If you think you've got a great solution in mind, don't put it in the comments! Instead, send it to puzzles@gatheringmagic.com with the subject line "Puzzle - No Safe Place" by 11:59 P.M. EST on Monday, April1, 2019. We'll include the best ones in next week's article along with the next puzzle!

"Fun puzzle!" Mark Koster writes. "At first it looked easy, then I found out that didn't work, and that kept happening."

"At first sight, this puzzle seems easy," Ryou Niji agrees. "We have more attackers than the opponent has blockers, so what's stopping us from attacking with everything, and getting 2 damage through that way? Well, it turns out that Elvish Lookout has shroud, and refuses to have more than 1 power, so if the opponent just blocks everyone else, we could only push through 1 damage that way.

The result is a combat-analysis solution. You actually don't have too many scenarios to work through, but you do have to do some preparations before your attack, as Dan Christman-Crook writes:

"If Phytoburst was an instant like Giant Growth," Chris Billard writes, "this would be easier, but realizing that Forcemage Advocate can provide the necessary boost is key. This also allows you to use Phytoburst to make sure Patrick's Urborg Stalker survives any blocking scenario, which in turn covers the case where Elvish Lookout is the creature that is not blocked."

Chris, of course, is talking about an alternate solution, which makes the interesting move of giving the Urborg Stalker the +5/+5 bonus:

Does the card returned by Forcemage Advocate matter? Aside from Renegade's Getaway, the cards in Patrick's graveyard will actually have varying levels of impact:

"One thing you can say for the designers of this Crap Cube," Addison Fox notes, "is that they sure were on the money. There are some staggeringly suboptimal options here, even considering the lows we're used to in the Unabridged Cube environment."

"Given Patrick's life total, though," Matt Bocek adds, "I understand Patrick's feeling of urgency... but he really walked into this one. He should have held back his Dune Outrider as an invincible blocker!"