Login
0 Item
Advanced Search
Sign In
Create Account
Verne picks up the card from your side of the table. "That's a very strange choice," he says. "Fun, but strange."

"It's from the first Un-set," Verne explains. "Came out before the turn of the century, I think. I remember I had a full set once, but that was before I sold a few cards. I never thought I'd see it in this 'Unabridged Cube', or whatever they call this booster draft thing."

"Well, it's got one of each card ever printed, so I guess it must have been time for it to show up."

"I never got too much into booster drafts," Verne admits. "The old decks were fine as they were."

For an opponent who has a preference for old kitchen table decks, Verne seems to be doing better than you. He has the advantage in your stalemated game, and it's not just because he has the only flyer on the table: Between his Aerial Responder and a Nyx-Fleece Ram to bring up the rear, Verne has settled comfortably back into his original twenty points of life.

The Avatar of Might on your side of the table would really like to make a dent in his life total, but unfortunately Verne has a Meandering Towershell in the way. Without any Islands in play, the Towershell's evasive ability doesn't mean anything to you... but at 9 toughness, it can easily stand in the way of your Avatar. Verne even attached a Mask of Law and Grace to it, in case you got any funny ideas about removal.

"What you mean is, did I ever bother playing it!" Verne says, grinning.

"'Course I did," Verne says. "I got it to work once or twice. But that's all. The problem with the old dog - no pun intended - is that you need your opponent to play into it. They have to cast some spells, and you have to fill in the rest."

"But you did get it to work," you point out.

"Once or twice. A couple of times I got it to 10/10, only for someone to pull out the Terror they were saving. Sometimes they saw the ability coming, and didn't even wait that long."

Inwardly, you wonder if you should have cast the Demonic Vigor in your hand. That would have made your Avatar big enough to get past the Towershell, but you kept expecting Verne to slap a Pacifism on it. Still, that would at least have given B-I-N-G-O one of its chips.

"That old dog only goes up to eight, right?" Verne asks.

"I mean, it only counts spells with mana costs up to eight?"

Verne smiles and lays an Artisan of Kozilek on the table. "It's a good thing this one costs nine, then. I'll use it to return my Bramble Elemental to play."

You sigh. At least you now know that Verne's not holding a Pacifism.

You untap your permanents and take your next draw, adding a Traitor's Clutch to your hand. It's evasion all right, but you're not sure if it's enough to save you before Verne runs roughshod over your board. You can only hope that you can get the pieces of your plan all in a row before it's too late.

It is the start of your first main phase. Defeat Verne before the beginning of his next combat phase. 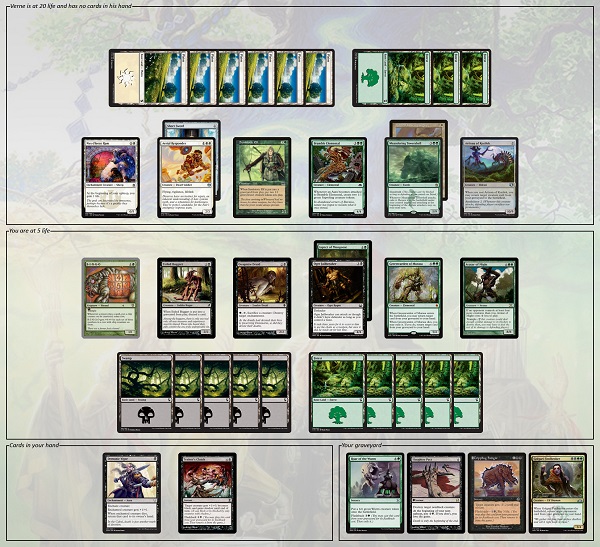 B-I-N-G-O's ability works off the three-by-three grid of numbers in its artwork, which shows:

Verne is at 20 life and has no cards in his hand. He has the following cards in play:

If you think you've got a great solution in mind, don't put it in the comments! Instead, send it to puzzles@gatheringmagic.com with the subject line "Puzzle - And Bingo Was His Name" by 11:59 P.M. EST on Monday, April 8, 2019. We'll include the best ones in next week's article along with the next puzzle!

The first of these corrections was to ensure that a solution to the puzzle was available. "There are four things on which we can spend mana," Addison Fox notes. "Wild Slash, Assassinate, Whalebone Glider, and Accorder's Shield. With only six mana to spend, we however, have to choose at most three of these."

In order to make a solution possible, you have to re-equip the Accorder's Shield. This implies that you need its vigilance ability, which makes sense when taking multiple tap abilities into account - either via Mobile Garrison, or via Agadeem Occultist.

The most straightforward solution, in fact, takes advantage of the Mobile Garrison. As Max Bernstein writes:

This solution means that you never actually deal combat damage, which is important: Amina can choose to block with her Lone Rider for a single point of lifelink damage. Instead, your kill mechanism comes from three Night Market Lookout triggers (one of which is from a Tilonalli's Skinshifter), and Wild Slash.

The more complex solution takes advantage of Agadeem Occultist. "If you want to take the 'No Safe Place' theme even further," Matt Bocek writes, "we can use the Ferocious ability to take Personal Sanctuary offline and make Amina deal the last point of damage to herself."

This approach is interesting in that it diverges at one point - although you get the same result in the end. David Arnold writes:

Note that in Step 7 above, Amina can also choose to leave Sidisi's Pet unblocked. This deals its 1 damage to her during combat, and allows you to finish her off immediately with Wild Slash.

In order for this second solution to work, however, your opponent's Serendib Efreet must have the Eel Umbra attached. Otherwise Amina has a way to escape your plan: She can simply have the 2/3 Efreet (considering its penalty from Smog Elemental) block your 3/4 Mobile Garrison, removing the Efreet and shutting down the possibility of taking its damage at the beginning of her upkeep.