"I guess that means your Paniac isn't attacking," you say.

"This deck isn't exactly the best thing I've put together," she admits. "It's all combos and lifegain, but not much else."

"You were able to get me down to three life. I'd say you're doing okay."

Mari draws her card for the turn, and raises an eyebrow. "That's timely," she says.

"And by 'timely', I think you're saying that it's going to absolutely destroy me."

"Not exactly, but it's close enough," Mari says, tapping five lands and casting a Griffin Dreamfinder. "I only have one enchantment card in my graveyard, so you know where this is going."

Unfortunately, you do. You watch as she returns a Prison Realm to her hand, then taps her last three lands to slap down your copy of The Mimeoplasm.

"...and I just cast that last turn," you say, mournfully.

"Just like what happened when your Death's Shadow started approaching double digits," Mari notes. "How big was that Mimeoplasm again?"

Mari gives you a look. "You'll have to excuse me if I don't feel too bad about that Prison Realm," she says. "Don't forget that I gain two more life from my Student of Ojutai. And I'll scry for one."

Cécile peers into the room. "Lunch in about ten minutes, guys," she says.

"No, it's CJ's turn today. I'm surprised that he actually knows his way around a kitchen."

"I know he's done part time at that grill near Merriwether's."

"That probably explains it."

"I know that if I were hunkering down for a while, I'd have wanted to have a good cook with me."

"No," Mari says, "My line's more on the defensive side right now, so I'll let you figure this one out. Any responses before I end my turn?"

You briefly consider spending the +1/+1 counter on your Gristleback to draw a card, but then discard the idea - you'll probably need all the life you can get at this point. Instead, you tap two lands to cast the Feral Instinct in your hand.

"Just for the card draw," you say.

You untap your permanents and take your draw from the Feral Instinct, adding a Courage in Crisis to your hand. You then follow that with a Cartouche of Ambition from your normal draw, and suddenly you're wondering if it's enough to put you back in this game.

"An even twenty," she says.

"That's a tough hill to climb."

"Since when was that an obstacle?" Mari points out, smiling.

"With a Pacifism on it," Mari notes.

"A Pacifism from Ikoria: Lair of Behemoths," you add.

"I think we've already established that the twins have... extensive resources," Mari says. "I'm not going to bother asking how they got this one."

"And knowing them, they wouldn't tell us at all."

Cécile peers into the room again. "Lunch is on," she says.

You glance at Mari, and she glances back at you. "Don't look at me," Mari says. "Figure it out yourself." 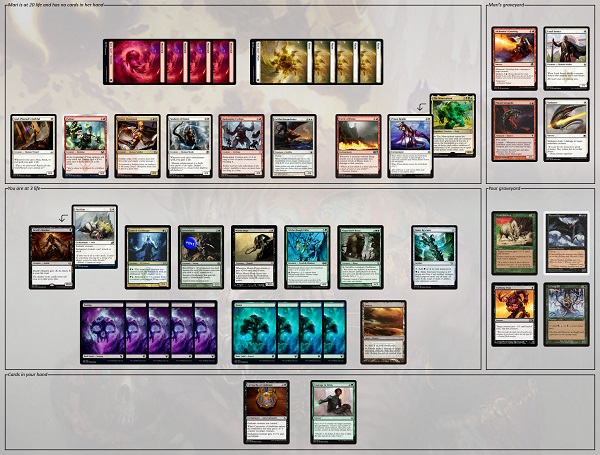 Mari is at 20 life and has no cards in her hand. She has the following cards in play:

Mari has the following cards in her graveyard:

Instead, if you think you've got a great solution, you can send your solution to puzzles@gatheringmagic.com with the subject line "Puzzle - Good Eatin'" by 11:59 P.M. EST on Monday, April 13, 2020. We'll include the best ones in next week's article along with the next puzzle!

"The main clue here was the amount of mana we have," Sean Patrick Keatley writes. "We do not have enough to really even entertain Time Elemental's bounce ability, so that steers us in a certain direction.

"I tried to figure how to get a bunch of Foul Imp triggers, but realized that their Chalice of Life is untapped so they functionally have 7 life. They also have too many flyers, so combat is out of the question. In addition, the Foul Imp can hit for 2 and that leaves 5 - a convenient number for Time Elemental and Sower of Discord."

The problem, however, lies in how to get Sower of Discord from your opponent's graveyard into play. As Russell Jones writes, you'll need to go through a lot of graveyard manipulation to get there:

Notably, Time Elemental's triggered ability only resolves at end of combat, which gives your opponent ample time to block (and possibly deal lethal damage to it). However, this only gives them a temporary reprieve: Time Elemental will deal 5 damage to you regardless of whether or not it's still on the battlefield at end of combat.

"The solution requires fine control over CJ's graveyard and its order," Hyman Rosen observes, "so that when he must choose a card in his graveyard, the choice is forced. Getting this done requires careful ordering of abilities and resolution."

"I guess that sometimes," Russell adds, "even when you're isolated, and not taking any damage (or poison counters), the infection can still strike."