Login
0 Item
Advanced Search
Sign In
Create Account
"Okay, Mari," CJ says, "I'll just use my Disciple of Tevesh Szat to kill off your Soul of the Harvest."

"And then you'll attack?" Mari asks.

Mari sighs. "You've got three flyers, CJ," she says. "I've got no blockers for any of them, a Time Elemental with summoning sickness, and a Femeref Archers that'll die the moment I activate it."

"So what are you saying?"

"Nothing," Mari sighs. "I just thought I'd mention it."

"I think you're leaning too much on that combo of yours, CJ," you point out.

"It's also really fragile. I mean, you're tapping Chalice of Life to get Regna, the Redeemer to give you two tokens on the end step, for which you're activating Mentor of the Meek so that you have cards that you can feed to Solitary Confinement."

"I just need it to last long enough for me to transform Chalice of Life," CJ says.

"And I've got a Time Elemental coming online," Mari adds.

"I figure I'll get there eventually," CJ says.

You shake your head. There's something to be said about a man and his delusions, but you're not going to be the one to say it.

"I have to say that this is a nice collection we're playing with," Mari says.

Your expression brightens. "Yeah," you say, "Cécile's wards - the twins - have apparently been building it up for a while. It's not quite an Unabridged Cube, but it's probably close."

"You could have fooled us," Mari says. "Speaking of which, are you done with your turn?"

Mari untaps her permanents and adds a Mirror Mockery to her otherwise-empty hand.

Cécile steps inside your room, junk food in tow. "Sorry everyone," she says. "It was a long walk to the pantry; I'm starting to think that we should set up supply depots. Did I miss anything?"

"Just CJ trying to climb the most uphill route to victory ever conceived," you say.

"Is that a Solitary Confinement?" Cécile asks. "That looks like it's going to be a long game."

"Probably not as long as you think," Mari says, cryptically. 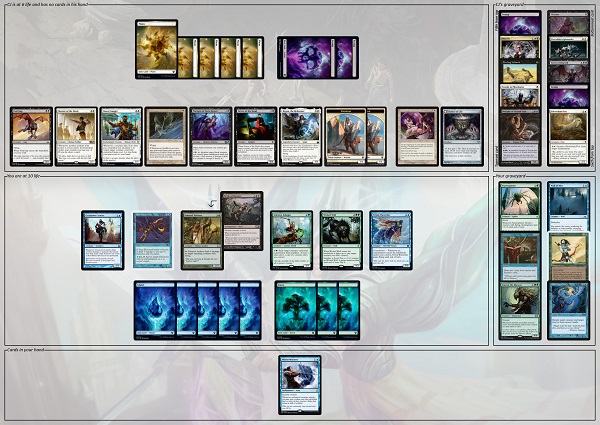 You are at 10 life, with the following cards in play:

CJ is at 6 life and has no cards in his hand. He has the following cards in play:

Instead, if you think you've got a great solution, you can send your solution to puzzles@gatheringmagic.com with the subject line "Puzzle - Personal Bubble" by 11:59 P.M. EST on Monday, April 6, 2020. We'll include the best ones in next week's article along with the next puzzle!

"You might think that Eager Beaver's normal-sounding (if not normally-typed) ability would make it the rare silver-bordered card that doesn't dominate the puzzle it's in," Michael Feldman writes. "But deciding what to untap is probably the toughest choice of the puzzle. Not that deciding on Coffin Queen's target is necessarily a walk in the park."

In fact, there are several things that you can have Eager Beaver untap, all of which can work toward a win. Sean Patrick Keatley, for example, notes that you can do the following:

Alternatively, you can simply sacrifice Eager Beaver to Phyrexian Tower instead of using Grim Contest right from the start. Taking this approach still requires you to return Auramancer and put Demonic Vigor on Vesperlark, but Michael Feldman then takes a different turn:

The "sacrifice Beaver to the Tower" approach has at least one variation, but it's a good one that involves using Eager Beaver's ability one more time. Jonah Comstock's sequence points out the following:

It's worth noting that Jonah's last move also removes Vesperlark as well, and sets up your opponent for one more damage via Forge Devil.

"Another funny feature of this puzzle is the theme that '5' is really '6'," Michael observes. "That is, Silent Attendant makes Cécile's '5 life' functionally '6 life', and reducing Fledgling Dragon to 5/5 by getting rid of threshold really only reduces the Dragon to 6/6, considering the assist from Paragon of Fierce Defiance.

"Then there's the theme alluded to in the title. As is so often the case, when confronting bloodthirsty barbarism and raw strength, cool manipulation and dexterous use of defensive power will be your saviors."