Login
0 Item
Advanced Search
Sign In
Create Account
You sit back. On the one hand, it seems very unlikely that you'll win this game with what you have on the table. On the other hand, you're playing against CJ, and there's always the chance that he'll present an opening by his own initiative.

Then again, there's also the issue of his high life total. You tell yourself that you'll worry about that when the time comes.

"And I'm still not able to block it because of that Aether Tunnel," you mutter. "I'll take four, and you gain four life. Again."

"Cécile says that she found a closet full of old DVDs, so she and Mari are now seeing if they can find anything interesting for movie night."

You raise an eyebrow. The twins never struck you as DVD collectors, but perhaps their parents are traditionalists. That said, you mentally remind yourself that not everything's on the internet just yet.

"I'll cast a Drownyard Explorers," CJ says. "That'll give me a Clue token."

"That's not cycling if you activate the token, is it?" you ask.

CJ takes a closer look at his creature. "I don't think so," he says. "Does your Crystalline Resonance only trigger on cycling?"

"Yes, just cycling," you say. There's a bigger question as to why the twins have a copy of a rare from the Commander 2020 set - especially when you consider that they've had to have had it for some time now --but you've learned not to ask questions.

"You do realize that you can do it before the end of my turn, right?"

"I'll need the chance to play a land in case I draw one," CJ explains.

CJ draws a card and drops it on the table. "Celestial Colonnade," he says gleefully. "What did I tell you?"

"That's still not how the logic works. You're supposed to... ah, nevermind."

You glance over your board. You and CJ have managed to end up with similar

decks today, with the main difference being that you have a slightly greater emphasis on the "Blue" part. This has made combat particularly frustrating for you: After all, when both sides have flyers, nothing really gets through.

That said, you could consider the upside: For one, you do have a source of unblockable creatures in your Soratami Mirror-Guard (although not to the same degree as CJ's lifelinking Sanctum Spirit). And you'd be at a far greater disadvantage if you hadn't banished CJ's Isperia, Supreme Judge with a timely Cast Out.

After CJ declares the end of his turn, you add a Countless Gears Renegade to your hand and consider your next move. At seven life, you don't have a lot of maneuvering room left, especially now that CJ will have access to a 4/4 vigilant flyer after his next untap step.

"Technically, I've got something," you say.

"Are you going to play it?"

You shift in your seat. "It's not about whether or not I'm going to play it," you say. "It's about how I play it." 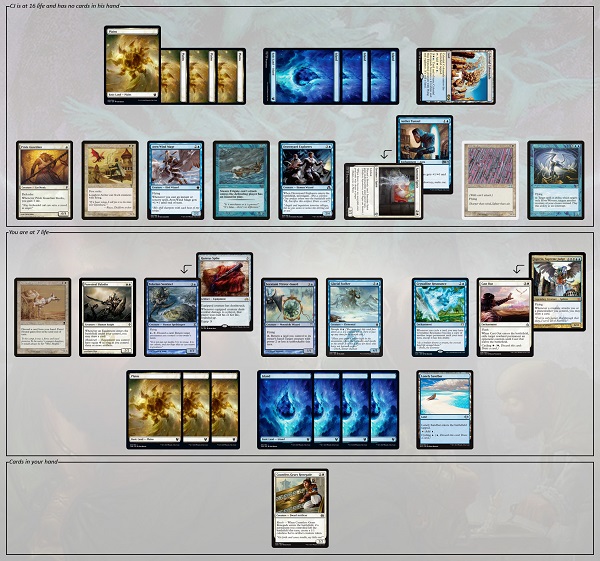 CJ is at 16 life and has no cards in his hand. He has the following cards in play:

Instead, if you think you've got a great solution, you can send your solution to puzzles@gatheringmagic.com with the subject line "Puzzle - Reflections" by 11:59 P.M. EST on Monday, April 20, 2020. We'll include the best ones in next week's article along with the next puzzle!

Between the use of both +1/+1 and -1/-1 counters, and the presence of proliferate effects, you're definitely throwing around some counters here. The problem is that there's no clear path to victory on the surface:

This leaves you with a creature that's not exactly on the battlefield at the moment: The Mimeoplasm. If you're going to free it from its Prison Realm, though, you'll need better things to assimilate.

"Our aim is to reduce our opponent's life points using the effect of Mortis Dogs," Wei Lin and 'Bubbles' note:

"Solving this puzzle came down to the following challenges in rising level of difficulty," Michael Feldman clarifies:

Michael's variant, in fact, notes that you have enough resources to off Death's Shadow without putting the Cartouche of Ambition on it.