Together, Mari and Octavia make a strange and contrasting sight.

Octavia sits primly on one side of the table, looking as elegant as you remember, and wearing a little black dress with a matching bolero jacket. On the other side of the table, Mari sits in an awkward position, wearing a paisley bandanna, denim cutoffs, and a white t-shirt with SEPHIROTH DID NOTHING WRONG stenciled down the front.

Mari's also glaring at the board, wrestling with some problem or other. You drop yourself into the seat right next to her and wave hello to Octavia. She nods in reply.

"That sounds like a normal War of the Spark game."

"You're just jealous because you didn't make it to the prerelease last week."

You glance at the table, taking note of the current board position. "Seriously, though, that board state really doesn't look good," you say.

"I think she used a lot of her removal early," Octavia explains, "so she's having trouble getting rid of my Oketra and my Sunblade Angel right now."

"That's what you're attacking with?"

"And that Angel's got lifelink, too," you add.

"Have you decided on your blockers?" Octavia asks her, gently.

Octavia nods. "Are you dealing 1 damage to my Challenger Troll with the trigger?"

"Why are you wearing that dress, Octavia?" you ask."Another modeling job?"

"No, it's nothing that sophisticated," Octavia says, smiling. "I'm just attending a wedding later this evening and won't have time to change."

"And here I was wondering if you dressed up for all your tournaments," Mari grumbles. "Are you done for the turn?"

"Great," Mari says, untapping her cards. "Let's see how much closer my deck brings me to losing this game."

You steal a glance at the Emergence Zone that Mari has just drawn. "What do you mean, 'oh, wait'?" you ask.

You know Mari well enough to recognize that it's indeed a very bad sign for Octavia, but you're not sure if you're seeing what Mari's seeing. "Am I missing something?" you ask.

"I think I might have enough to close this out," Mari says.

"So it is a bad sign," Octavia says, shrugging.

"Not so much," you say. "Mari still needs to make her play, whatever it might be."

"Okay, maybe more than a minute," Mari admits. "You might want to get a drink first." 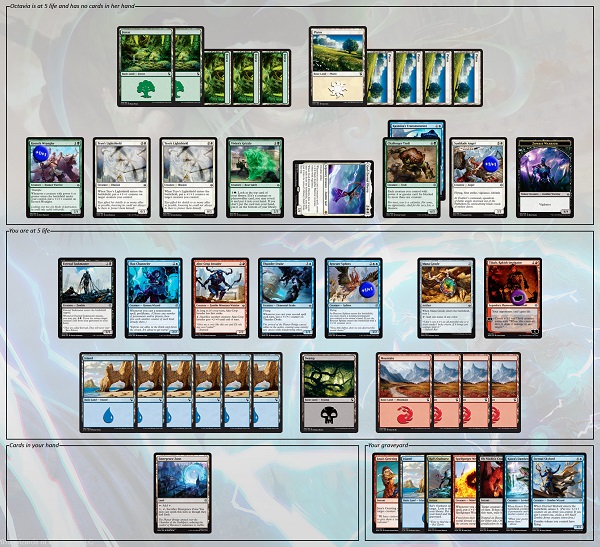 Octavia is at 5 life and has no cards in her hand. She has the following cards in play:

If you think you've got a great solution in mind, don't put it in the comments! Instead, send it to puzzles@gatheringmagic.com with the subject line "Puzzle - Distant Thunder" by 11:59 P.M. EST on Monday, May 13, 2019. We'll include the best ones in next week's article along with the next puzzle!

"The answer to this puzzle, like the previous several," Addison Fox writes, "is to look directly at the back side of the two flipwalkers we have in play and see if they directly correlate to our opponent's life total. In fact, they do: Grant is at 10 life, and Nicol Bolas, the Arisen deals 10 damage. The fact that he can't target a player is a minor triviality we'll sort in time.

"Working backward from there, we must flip both of them, which means we need to find both another Red mana source and another Black mana source - finding our seventh land for Nissa has been done for us - and in fact the two are linked."

As it turns out, those sources of Red and Black mana are the same card: City of Brass. The problem, then, involves finding a way to use City of Brass twice - and it means following a circuitous route that Michael Feldman points out in his solution:

You need to kill off your Sparring Construct, of course, in order to ensure that Nicol Bolas, the Ravager survives four Spitting Spider activations. This was a sticking point for a number of solutions, but its 1 toughness helps here: If your opponent doesn't deal lethal damage to it during combat, one activation of Spitting Spider is all you need.

"I almost underestimated this one," Michael admits. "The Nicol Bolas / Filthy Cur / 10-life dynamic is fairly obvious, but sequencing things just right so that you can pull that mana from the fabled Brass indeed earns the puzzle title."