Several hours into your local game store's Core Set 2020 prerelease tournament, you find yourself sitting at one of the corner tables with a 0-3 record, hoping to hang on long enough for a single booster pack. You can't help but feel that this day went south somewhere.

"Buck up," Zeb says, tapping his lands. "It's Game 3 and we have, like, fifteen minutes left. At least we know that one of us is going to win this match."

You really, really want to make sure that you're that winner, of course. You have a slight advantage at the moment, mostly because you have the biggest flyer in play. Zeb, however, has more than a few draw spells in his deck, and you're keeping a Soul Salvage in hand, in case he tries anything funny.

Unfortunately, Zeb's play isn't one of those draw effects. "I'll cast Scholar of the Ages," he says.

You glance at his graveyard. "You only have one sorcery card in there," you point out.

"I just need the one," Zeb says. "I'll use the Scholar's ability to return my Eternal Isolation to my hand."

You pause, and then frown. "I don't like where this is going," you say.

"I'll then use my last two mana to cast Eternal Isolation on your Bloodthirsty Aerialist."

"It puts it on the bottom of your library," Zeb says, eyeing your Salvager of Ruin. "So no Salvager for you."

And no Soul Salvage either, you think, frowning again.

"I'll attack with my Griffin Protector and my Griffin Sentinel," Zeb says. "Don't forget that the Protector's a 3/4 from the Scholar coming into play."

"You're not attacking with your Cloudkin Seer?"

"You'll just block it with your Dawning Angel, and then your Angel will come back as a 4/3 from the Unholy Indenture and give you another four life. At least this way, I've got a good chance of having three flyers to rush you next turn."

With only the Soul Salvage and a Bone Splinters in your hand, you don't exactly have anything good to cast in response. Maybe you can tough things out for a little bit longer, though.

You instantly feel a little regret, thinking that you may have just missed a better play. But it's too late now - Zeb gestures to end his turn, and you untap your permanents.

Your draw for the turn is a fortuitous Gods Willing, a card that's served you well even through three match losses. It might still serve you well right now, if only to help preserve one of your blockers against the inevitable rush next turn.

Then again, there's also the possibility that you don't have to wait till next turn. You've got a bit of removal, after all, and Zeb's down a single blocker. But is there a way to take down your opponent before he does the same to you?

It is the start of your first main phase. Defeat Zeb before the beginning of his next combat phase. 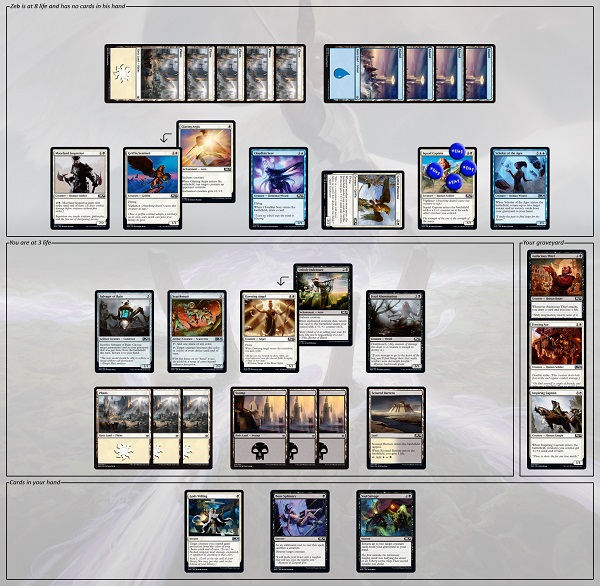 Zeb is at 8 life and has no cards in his hand. He has the following cards in play:

If you think you've got a great solution in mind, don't put it in the comments! Instead, send it to puzzles@gatheringmagic.com with the subject line "Puzzle - Black White Gray" by 11:59 P.M. EST on Monday, July 15, 2019. We'll include the best ones in next week's article along with the next puzzle!

"This is an interesting puzzle," Addison Fox writes. "The easiest way to find the solution is to work backward. We obviously can't attack for the win - we don't have 7 power in play, and we barely have that much in our hand and graveyard. However, we do have two sources of non-combat damage, one obvious and one less: In our graveyard, Lava Dart (good for one damage to any target), and on their battlefield, Phyrexian Delver, a Reanimate on a stick. Since the biggest thing we could force them to reanimate is five CMC, that leaves a seventh point of damage to be determined. This is where the Pyromancer's Goggles come in."

The problem, of course, is that Lava Dart is the only Red instant or sorcery spell you can use with the Pyromancer's Goggles... and its flashback cost doesn't even involve using any mana. In order to get this working, you'll need to give Lava Dart an additional cost you can pay - as Russell Jones writes:

"The main line of play was clear to me quite quickly," Gerwin Ruiterkamp writes, "but every time my opponent had an answer:

"Once I realized that Brink of Disaster also goes to their graveyard after you tap the Heavy Ballista, you have three do-nothing cards to target with Pulsemage Advocate, and all the pieces fell into place."

"It's been a while since the puzzle has been this tricky," Hyman Rosen muses. "Such a clever false trail - Heavy Ballista and Pulsemage Advocate are both Human in their Oracle wordings but not on their cards, we could kill the Black Cat to discard Angel of Glory's Rise and return it with Pulsemage Advocate, and Tally has so many Zombies to exile. But none of that matters: The puzzle should have been named 'The Angel Does Nothing'."