Your Core Set 2020 booster draft hasn't gone too well today, but for once, you don't mind.

After the Masterful Replication in your first pack made it around the table, you figured that an artifact theme was in order - supported by the back-to-back Renowned Weaponsmiths you picked up shortly afterward. Unfortunately, your remaining packs contained little or none of the shiny tools, constructs and doohickeys you were expecting, and you had to make a late move into an Elemental-heavy build.

You did slam a Drakuseth, Maw of Flames from your third pack, though, so your draft efforts weren't a complete failure. So far this tournament, you've:

In short, your deck might not be the best you've drafted... but at least it's entertaining.

Unfortunately, you might have met your match with Avra. Like you, Avra's drafted a sub-par deck that's somehow managed to notch some wins. Unlike you, however, Avra's deck doesn't seem to adhere to a specific theme: she's either catching your attackers unprepared with Feral Invocation, milling you with Sage's Row Denizen, or using flyers to attack through a clogged board. After you narrowly won your first game, you've concluded that it's hard to fight a deck on multiple fronts.

It certainly looks like you're going to lose your second game, however, which worries you. You're running out of time to finish this round, which means that you might not be able to finish a third game - and a draw would be bad for both of your records.

The problem is that Avra has well and truly shut down most of your attacks. You have the biggest flyer on the table - a Rapacious Dragon with Maniacal Rage - but Avra drew a Cerulean Drake at some point, and it's reduced your Dragon to a glorified coaster. Any hope of you taking down the Drake with a colorless source of damage was stymied when Avra dropped a Feral Invocation on it.

With your board tied down, the game has swung in Avra's favor. She's recently attacked with her Boreal Elemental and an unblockable Frilled Sea Serpent, which left you at 6 life after you threw your Cloudkin Seer in front of the Elemental. With only two cards remaining in your library at this point, you're holding your breath and hoping that she doesn't have a Blue creature in her hand for a final Denizen trigger.

Avra sees the expression on your face, and grins. "I'll cast a Sedge Scorpion," she says. "I guess you're not drawing from an empty library next turn. You can go ahead now."

"This would have been a lot easier if I knew you were splashing White," you say.

"After you showed me that Drakuseth last game," Avra says, "I felt that I should bring in a Devout Decree. I guess that move worked."

You untap your permanents, sparing a glance at the Drakuseth that's been shunted off to one side. Considering that the vast majority of your deck is now either on the battlefield or in your graveyard, your draw this turn can only be one of two possible cards.

You draw your Masterful Replication to join the Blood for Bones in your hand. That means that the last card in your library is your Colossus Hammer - which is a bit of a shame, considering that you can equip it to something quite easily at this point (not that that matters too much). The question now is what to do next.

You're pretty certain that you're casting Blood for Bones this turn. Returning your Cloudkin Seer to the battlefield would probably be a bad idea, but at least your graveyard still has a Spectral Sailor that can take on blocking duties. If Avra decides to throw both her flyers into her next attack along with her Sea Serpent, however, whatever you do this turn might be moot.

...Unless, of course, you can somehow end the game before she can throw her creatures at you. You'd need the right tools for the job, though.

It is the start of your first main phase. Defeat Avra before the beginning of her next combat phase. 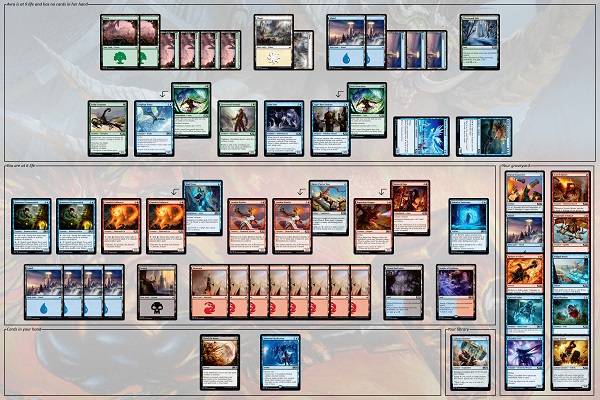 You have not yet played a land this turn. You have only one card remaining in your library:

Avra is at 9 life and has no cards in her hand. She has the following cards in play:

If you think you've got a great solution in mind, don't put it in the comments! Instead, send it to puzzles@gatheringmagic.com with the subject line "Puzzle - When All You Have is a Hammer" by 11:59 P.M. EST on Monday, July 22, 2019. We'll include the best ones in next week's article along with the next puzzle!

"This one made me think for a moment," Dan Wilson writes. "It comes down to being able to cast some of our spells twice, while also moving our Unholy Indenture away from our own creature, to our opponent's."

"I stared at it for a good twenty minutes before I realized Unholy Indenture could target your opponent's creatures," Jonah Comstock adds. "And even once I worked that bit out, the nuances of protection and sequencing here were kind of a nightmare. That darn Griffin nearly did me in until I realized I could make it Black to clear the way for the Angel."

There's also the question of exactly what to target with the spells you use (and for that matter, re-use), but Chad Salo's solution helps clarify that:

," Chad observes, "as long as you destroy the other one with Bone Splinters." In fact, using Scuttlemutt to make the Griffin Sentinel both White and Black, then using Bone Splinters to remove Cloudkin Seer, provides a variant solution.

"I had to read Scuttlemutt a couple of times to realize that it could make a permanent multiple colors," Max Bernstein notes. "And of course, this would have been easier if you had blocked with your Dawning Angel last turn and sacrificed the Salvager then to get your Indenture back. But as they say, all's well that ends well."