You jerk back to reality. "What do you mean?" you ask.

"You gave me this weird look just as I was sitting down to our match," Regina says. "And I think I saw the same look on your face when you were reading the matchups. What's up with that?"

"Oh," you say. "I just thought you were related to someone I knew."

"Is that all?" Regina says.

You're back on the Unabridged Cube today, with Regina going

. The Cube has thrown you a bit of a curveball today: Despite your colors, Regina's deck is more focused on discards rather than graveyard interaction... and your deck revolves around bounce, blinking and +1/+1 counters rather than straight flyers.

Regina draws two cards, one from her Mindstorm Crown and one from her normal draw step. She's been on the defensive ever since you dropped a Reprobation on her Scrounger of Souls and ate her largest creature with a surprise Dirgur Nemesis. However, she still has some good blockers on her side, and you haven't been able to make a recent dent in her life total.

Regina glances at your Brago, King Eternal once more. His Royal Highness has spearheaded your defense for a couple of turns now, sitting tight with an Illusionary Armor as a 6/8 creature. Normally that's enough incentive for you to attack with Brago, but Regina has been canny enough to hold onto her draws until the last minute, and you're worried that a single targeted effect might result in your losing your best flyer.

Suddenly you become aware of Regina holding a card out to you. At first you think that she's trying to give you something, but then you realize that she's just cast a Defeat and is aiming it at one of your creatures.

"I'll take out your Dawnglare Invoker," she says.

For a moment, you wonder why she's not aiming for Brago. Then you realize that her Defeat has a limited range of targets, and you slide your Invoker into your graveyard.

"Too bad I'm short of eight mana," you sigh.

"That's why I took it out," Regina says, "or otherwise you might have won already. I'll now cast Vampiric Embrace on my Vigilant Baloth."

You frown. Now your opponent's the one with the biggest flying creature on the table - an 8/8, considering the Beastmaster's Magemark on her Grappling Sundew. That's big enough to beat Brago in combat, and you have to admit that you're in trouble.

Regina pushes her Baloth forward, indicating that it's attacking by itself. You can either throw Brago in front of the Baloth and have the flyer bring you to your knees next turn, or you can take the eight damage and pray that Regina doesn't overwhelm you with an alpha strike.

You glance at the Void Snare in your hand, wishing that it were an instant. It does give you a way to handle the flying Baloth on your turn, but that might already be too late. One of the problems of playing the Unabridged Cube, you muse, is that it has one of each card ever printed - so you're not even sure if you can topdeck anything that will neatly resolve this situation.

Finally, you shrug. "I'll take the eight damage," you say.

"That's brave of you," Regina says, smiling. "You're at two life, then. Did you remember that I have a Skirsdag Supplicant on my side?"

You raise an eyebrow at that, but then calm down almost immediately. "Yeah," you say, "but you don't have anything in your hand."

"Which means that I just have to win before you can draw a card."

Regina laughs. "You're optimistic, at least," she says.

To be fair, you're not even sure if you believe what you're saying. But you untap and draw your card for the turn anyway: Separatist Voidmage. It's... removal of a sort, you admit, although you'll need to figure out how to make the most of it.

Regina makes a good point, though: You can probably use your Void Snare and your Separatist Voidmage to cut her army down to size. The problem is that it'll only give you a temporary reprieve, and there's the matter of her discard effects to worry about.

Sometimes you wish these situations would be easier than they look. But if you can pull this off, you can take some solace in considering this another of your crowning achievements.

It is the start of your first main phase. Defeat Regina before the beginning of her next combat phase. 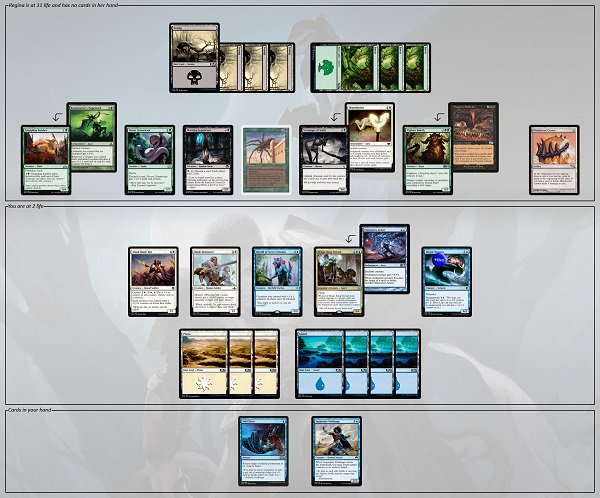 Regina is at 11 life and has no cards in her hand. She has the following cards in play:

If you think you've got a great solution in mind, don't put it in the comments! Instead, send it to puzzles@gatheringmagic.com with the subject line "Puzzle - Fit for a King" by 11:59 P.M. EST on Monday, August 5, 2019. We'll include the best ones in next week's article along with the next puzzle!

"Your creatures have nowhere near enough power to defeat Enrique this turn," Greg Dreher writes, "so it's obvious that Lord of the Pit will have to step up. That means Rubinia Soulsinger is going to be very busy whittling away his board."

"After realizing you needed the damage from Lord of the Pit to kill your opponent," Philip Belin adds, "the challenge was figuring out how to boardwipe Enrique so he didn't have anything to sacrifice. The solution involves a lot of stack shenanigans. This is why they don't put Control Magic effects at instant speed anymore."

Rubinia's ability, however, is limited to the number of times she can be tapped - in which case a critical component of the puzzle lies in figuring out how to untap her. You have one free untap trigger in Copperhorn Scout, but you'll need to look elsewhere for more. Ross writes:

"I generally prefer puzzles in which you kill the opponent directly this turn," Chad Salo remarks, "but there is something nostalgic about having your opponent die to their own Lord of the Pit. :)"

"Enrique forgot the most important rule that old school players learned in 1993," Greg notes. "When you play with Lord of the Pit, never leave home without protection... Circle of Protection: Black, that is."