Login
0 Item
Advanced Search
Sign In
Create Account
Octavia sighs. It's an ironic expression, considering her choice of clothes today: Black, smooth, and flowing. She reminds you of the curtains at your local funeral home, if they had impeccable fashion sense.

Octavia sighs again. "I wanted to be the Princess," she says.

You wonder if that sentence ever existed at any point in time before this one. That explains the eyeshadow and mascara, at least.

"Queen," you say, as the truth dawns on you. "You're in that stage production of Snow White."

"Isn't that next month?"

"We're doing fitting today. It's for the cast picture that they put on the programs. We were supposed to have finished earlier this morning, but one of the seven dwarves slept through his alarm."

"He must have been Sleepy, then."

Octavia stops and gives you a very even look.

"You have to admit that the joke was right there," you point out.

"You're lucky I'm not the real Evil Queen," Octavia says, laying a Prophet of the Peak on the table. "I'll scry for two. That also makes my Shambling Suit a 5/3."

If there's any reason why Octavia should be feeling better about herself, it should be because she has a clear advantage this game. Her

deck doesn't have as many flyers as much as it does artifacts, but the synergy has worked wonders. In contrast, your

deck runs some good removal and substandard creatures - all in all, not what you were expecting for your Throne of Eldraine release tournament.

Octavia pushes her Shambling Suit and Mistford River Turtle forward, tapping only the Suit. "I'll attack with both," she announces, "and that makes the Shambling Suit unblockable."

You glance at the Turtle, which is currently a 1/7 because of Octavia's Shining Armor. The first thing that comes to mind as a blocker is your double-striking Raging Redcap, but if she's attacking into it and your Giant's Skewer, you're smelling a trap here.

"I'll block your Turtle with my Barrow Witches," you say. "I've only got five cards in my graveyard, so it only gets -2/-0 from your So Tiny."

"Lash of Thorns on my Barrow Witches?" you venture.

Octavia taps one of her Plains. "I'll cast Outflank on your Witches," she says.

"Well," you say, dropping the Barrow Witches into your graveyard, "I read that situation right, for once."

"I'm down to five life," you answer. You consider sacrificing your Gingerbrute for a gain of three life, but with more than a few lands at your disposal, you figure that you can afford to wait for next turn.

As you're untapping your permanents, Octavia rests her arms on the table. "Do you think I'd make a good Snow White?" she asks.

"I'm confident that you'd be able to dress the part," you say evasively, drawing a Merchant of the Vale to join the Claim the Firstborn in your hand.

"No, what I mean is whether or not I look the part."

"I think you'd be believable. You're certainly being believable as the Evil Queen right now."

Octavia purses her lips. "That's a very non-committal answer," she points out.

"It's not like it's a fair question, you know."

"You're not making me happy with that non-committal answer," she presses.

Octavia gives you a sharp look. 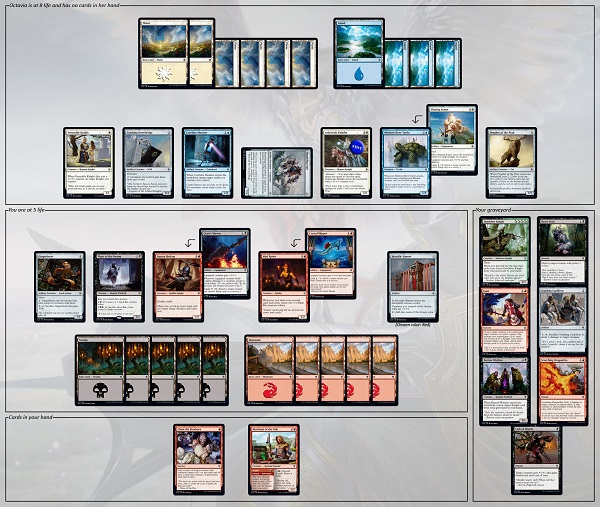 Octavia is at 8 life and has no cards in her hand. She has the following cards in play:

If you think you've got a great solution in mind, don't put it in the comments! Instead, send it to puzzles@gatheringmagic.com with the subject line "Puzzle - Bargain Basement" by 11:59 P.M. EST on Monday, October 14, 2019. We'll include the best ones in next week's article along with the next puzzle!

Last week's puzzle ran into a last-minute correction, replacing Weaselback Redcap with an Embereth Shieldbreaker. For an innocuous 1/1 creature, the Redcap actually breaks the puzzle... but we're getting ahead of ourselves here.

"We have so much Green and Blue mana," Addison Fox notes, "you'd assume the correct play is to cast as many things Adamantly as possible. But it turns out in order to push through 11 damage, we need to optimize the amount of food we can create instead, and let a very hungry fox take some liberties."

"Now that the Redcap is uninvited from the dinner party," Max Bernstein writes, "this puzzle just got a lot easier. So let's party it up and consume waaay too much food to win in one shot:

The original version of the puzzle put both you and your opponent in a very interesting spot. For starters, your Fell the Pheasant has an obvious target in the Bog Naughty. However, you have five possible targets for Maraleaf Rider's ability:

That, of course, is if he activates one of them. If he doesn't, Gordon can simply use them to block your two attacking 1/1 creatures, robbing you of that 11th point of damage! Interestingly enough, if he has the Redcap instead of the Shieldbreaker, Gordon's best move is to activate neither of their abilities.

While Sealed Deck is known to be a question of choices, it seems that the choice of whether to invite a Goblin Knight or a Human Knight to dinner here might make the difference between winning and losing. Gordon just glares at you as you move to your next match.