Login
0 Item
Advanced Search
Sign In
Create Account
You look up in confusion. "You're not blocking my Stocking Tiger?" you ask.

You glance back at the table, wondering if you've missed something. Everything seems correct, though: Your opponent doesn't have any cards in hand, she has an untapped Sky-Eel School that can easily block your flying promo card, and you're effectively going to draw fifteen cards if the Tiger gets through for damage.

"I might end up regretting asking this," you say, "but why?"

"Why would you let it through? I mean, you could just block and kill it with your Sky-Eel School. Didn't your friends mention playing against Stocking Tiger before? I mean, I've played Emi, Sophie and Holly."

Meera gives you a strange look. "I... just wanted to see what was in that booster pack," she says. "Besides, I have life to spare - the Tiger will only bring me to sixteen."

Considering that this is your last game before the holidays start, it's nice to be playing the Unabridged Cube. Having one of each card ever printed at your disposal is a somewhat comforting thought, especially after back-to-back releases that have been hard on your wallet.

In truth, though, you're a little on edge. This is mostly because Meera has just come off destroying your Soulblade Djinn - one of the few creatures in your deck that can match her forces in the air. On top of that, it was a lucky draw: She cast her Sky-Eel School, pitched a land, and lucked into a Path of Peace. You did get a boost of 4 life, but it wasn't much of a consolation.

You open the Guilds of Ravnica pack that was sitting under the Tiger, and chuckle. "This would have been a pack of Ultimate Masters if I didn't spend so much money on presents for the holidays," you say.

"Did you get anything good?"

Unfortunately, Ionize isn't exactly tearing up the charts at the moment, so you shake your head. You have a Lava Coil, though, and that might be good for a trade.

Now that that's settled, you turn your attention back to the game. Barring the fifteen new cards in your hand, you're simply not in a good position right now: You've used up your attack for the turn, your Wind Dancer and Stocking Tiger are both tapped, your opponent is at sixteen life... this is definitely not a good way to kick off the holidays.

"Should I assume that you're not going to kill me in the next two minutes?" Meera asks.

You leaf through the cards in your hand one more time - a task made more difficult by the fact that it contains more cards than you would normally be holding at any one time.

"Are you ending your turn now?"Meera presses.

You pause. "Hold on, let me think about it first," you say. "It's a shame if I don't play something."

It is the start of your postcombat main phase; you have already completed your combat phase this turn. Defeat Meera before the beginning of her next combat phase. 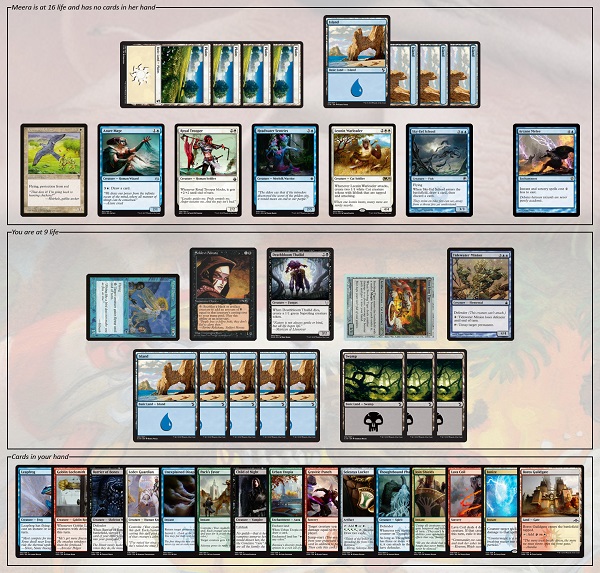 Meera is at 16 life and has no cards in her hand. She has the following cards in play:

If you think you've got a great solution in mind, don't put it in the comments! Instead, send it to puzzles@gatheringmagic.com with the subject line "Puzzle - The Color of its Stripes" by 11:59 P.M. EST on Monday, December 24, 2018. We'll include the best ones in next week's article along with the next puzzle!

"Although the opponent seems to be tapped out of blue mana," Ryou Niji writes, "both Vessel of Endless Rest and Verdant Eidolon allow him to produce mana of any color, so the Glen Elendra Archmage still threatens to counter any noncreature spell we may cast. Although if he was playing more tightly, he probably should have tapped Vessel of Endless Rest for blue on his turn, and left up an Island as insurance against another Ingot Chewer."

"This one was really tough," Stephen Gross adds."Garna, the Bloodflame was a huge red herring to me, since he can be so much value if we can just get the Grave Scrabbler to die after getting Garna back to our hand, but that just isn't feasible. Instead, we'll have to take out Jerry's Blue mana sources so we can steal that pesky Archmage and use it to deal the lion's share of the damage."

One interesting angle to the solution is that Jerry can add mana in response to your efforts to remove his available sources. As a result, you'll need to empty his pool at some point, as David Arnold writes:

"The three red herring graveyard creatures were really, really well-picked," Michael Feldman observes."Garna, the Bloodflame is especially tempting, with all that potential mana you've got to spend and that enters-the-battlefield-creature friendly ability. And Glen Elendra Archmage seems like she just has to be the Furnace Celebration target. But no - you need her as an extra flyer and Furnace Celebration fodder, giving her that needed edge over Marang River Prowler.

"The problem with all this improbable mastery over Jerry's mana sources and creatures for the win is that you're practically guaranteeing that you become a central target of his conspiracy theories. Worse yet, you might have him getting malodorously up close and personal when you're in other matches to observe your careful weighing of the cards when you shuffle."

That's not to say that we don't have any subtleties of our own, though. Did you notice the hidden message in last week's article?