Author's note: This is the 300th and last puzzle in this series. Thank you to everyone who has followed these puzzles for all these years.

If you're interested in more Magic: The Gathering puzzles, Possibility Storm releases some really nice ones on a regular basis (and has an interesting subscription-based model for solutions). Zzo38 also lets me know that there is at least one NNTP out there for puzzle discussion as well.

Our archive of puzzles also remain available at CoolStuffInc.com, who have been some very gracious and welcoming hosts over the last few years. Simplified Chinese translations for a lot of these puzzles are also available at Iyingdi.com, along with a very supportive and dedicated community. (I'll also plug the fact that both places have great retail and online stores, so please check them out!)

If you're interested in older puzzles, or want to see how these developed, you can also head over to my old archive at Perplexingchimera.com. And of course, I'm still up for discussion and note-sharing at perplexingchimera at gmail dot com.

Until next time, may your board states always be favorable, and may careful insight always light your way.

"That Eligeth of yours is going to kill me," you say, scribbling down your new life total.

You're clearly not in the wrong here. Apart from the fact that your opponent's Eligeth, Crossroads Augur is the largest threat on the table, it's also the only flyer on the board. That means you're looking at the very unwelcome prospect of five damage each turn - too much for you to take, and too quick for you to find a good solution.

"What does that sphinx do, again?" CJ asks.

"It's one of those new cards from Commander Legends," Mari whispers. "It makes you draw when you would normally scry."

"It replaces the scry completely," Mari says, squinting at the card. "A little narrow, but you can't complain about a 5/6 flyer."

"Sorry about that," you tell Sean. "Mari and CJ watch a lot of my games."

"Yeah, I have friends who do that too," Sean admits. "That's not counting the games where I was doing the watching."

"You don't mind the commentary," you say.

"I don't mind the commentary. This is the Unabridged Cube, after all - it's got one of each card ever printed, so it'll give us an endless number of strange situations to talk about."

You nod, even though you don't exactly see this as a strange situation. Having a big evasive creature hitting you in the face until you keel over is about as straightforward as you can get.

You sigh, glancing at your Pyrite Spellbomb. "I guess I have no responses, then," you say.

"That puts me back at twenty life, and I'll draw a card," Sean says. "I guess it was a good move to steal your Cyclops Tyrant a while back."

"It was risky," Mari points out before you can say anything.

"As a 3/4, it's mid-sized," Mari says. "And its ability doesn't work as well against a deck that has Red creatures in it. Just look at it right now - you're not attacking with it because you don't want it to run into three possible blockers."

Sean smiles. "I'll give you that," he admits. "The Persuasion was more of a defensive play, and an early one at that. And at least the Tyrant is stopping you from opening that booster pack."

"You could just let the Tiger hit you so that we can find out what's in the pack," CJ says.

"Mmm," Sean says, shaking his head. "That's probably not happening if I can help it."

"I guess we'll have to wait till the end of the game," CJ sighs.

"I can work with that," Sean says, tapping his last three lands. "I'll cast the Hinterland Drake I drew from the Guardmage. That's the last card from my hand."

"That Spellbomb's going to have to wait for another day," Sean says. "The table is yours."

You untap your permanents and draw a card. Mari and CJ both peer over your shoulders to see the Crowd's Favor in your hand.

"Sssh," Mari says. "You're not supposed to say anything!"

Sean smiles again. Seeing that he now has three flyers on the table that you're not going to be able to block, you might already be looking at a loss here. The fact that he's at twenty life just makes this game look even more impossible for you.

"Hold on," Mari says. "How many cards are in that booster pack?"

Sean thinks for a while. "Fifteen," he says. "That's not counting the extra token or advertisement card."

Mari clutches your shoulder. "You've got this game," she says. "You just have to play this right!"

"I thought we weren't supposed to say anything," CJ grumbles.

Sean turns to you. "Those are some friends you've got there," he says.

"That's what I keep reminding myself," you say. "I wouldn't trade them for anything, though. Shall we continue?"

It is the start of your first main phase. Defeat Sean before the beginning of his next combat phase. 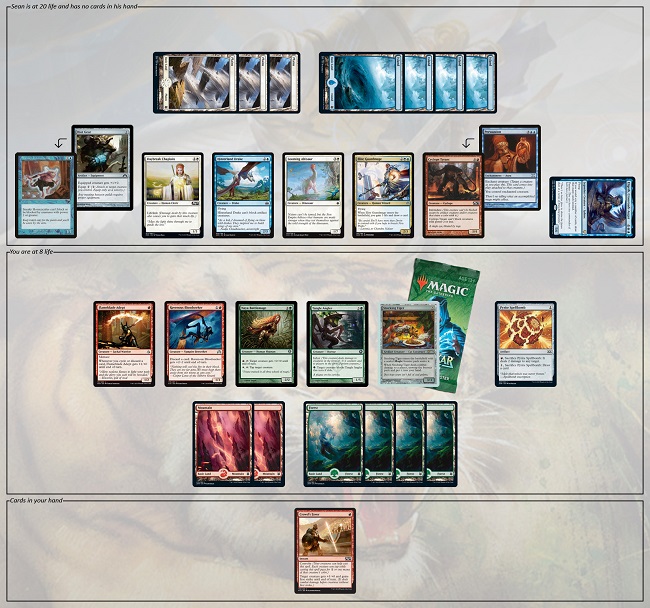 You have not yet played a land this turn. You still have a substantial number of cards remaining in your library (including a number of basic Mountains and Forests), although you know neither the identities nor the order of those cards.

You can safely assume that your Zendikar Rising draft booster is normal and untampered. The draft booster is unopened, so you do not know what cards are in it; you only know that it contains some combination of fifteen cards from the set: Ten commons, three uncommons, one rare or mythic rare, and one basic land card. (You can discount any token or advertisement card in the pack.)

Sean is at 20 life and has no cards in his hand. He has the following cards in play:

"Think back to to 1993-1994," Greg Dreher writes, "where running a creature like Force of Nature was always a gamble, as a well-timed Armageddon could make your giant creature into your worst enemy. Lynn's probably too young to have experienced this, which is why she put Force of Nature in her deck. But you can capitalize on this mistake."

Your best moves forward are probably best summarized by the train of thought that Max Bernstein provides:

Despite having only seven lands in play, you indeed have more mana than you need available. "The combination of World Shaper, Bearer of the Heavens and Elephant Ambush / Akoum Firebird seems to suggest a setup where you could wipe out your opponent's board while leaving yourself with both lands and creatures," Matt Bocek admits. "Instead, everything is backwards in this puzzle: You end up destroying all the lands that World Shaper saves, and leaving the only creature in your opponent's hands:

There are several variants to this solution, most of which involve alternative means to get mana: You could, for example, cast Bear Umbra on Devoted Druid to squeeze some extra mana out of it, then attack with the Druid for the Bear Umbra trigger. Removing the Druid with its second ability then becomes a nice touch, as it stops your opponent from gaining life by having their Bloodline Necromancer deal blocking damage.

Solution to What the Cat Dragged In

As you can probably expect, the draft booster pack under Stocking Tiger is the key to solving this puzzle. Even though you don't know what cards are in the pack, you do know that there are fifteen of them. Assuming that you can get the pack's contents into your hand, you can then discard all fifteen of these cards to Ravenous Bloodseeker, for a corresponding bonus to your Flameblade Adept.

The problem lies in how to get Stocking Tiger to deal combat damage to your opponent. You have no evasion available, but you do have a Tangle Angler that can "lure" up to four of your opponent's blockers. From there, you need to work your way around the rest: