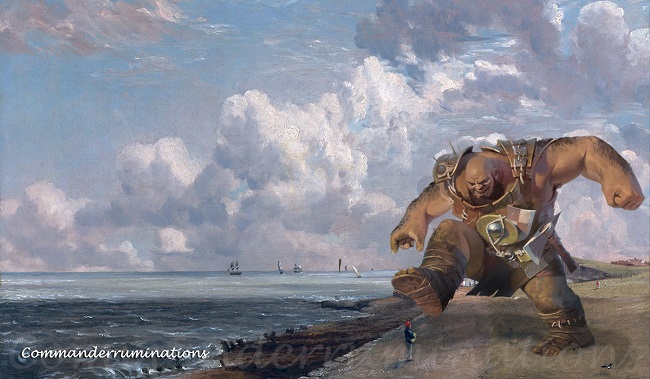 Harwich: The Low Lighthouse and Beacon Hill by John Constable (1820).

Who would have thought a few months ago that we'd soon have to deal with a Mono-White combo deck with a wincon every bit as dirty and as deadly as Mikaeus, the Unhallowed and Triskelion, otherwise known as "Mike & Trike"?

With the printing of today's Commander in Theros Beyond Death, White has a new toy that opens up the kinds of shenanigans other colors have been getting up to for years. White has long been one of the weaker colors in Commander, though it is a very strong support color. I don't know if today's deck is a sign that Wizards of the Coast wants to make White more relevant or if it's just an outlier, but today's list is a fairly spicy brew with a lot of lifegain and yes - even a few combos.

Heliod, Sun-Crowned is a 5/5 Legendary Enchantment Creature with a creature type of God. He's indestructible and isn't even a creature unless your devotion to White is 5 or more. If Heliod is on the battlefield, whenever you gain life you put a +1/+1 counter on target creature or enchantment you control. You get all that for the low, low price of

, but that's not all. You can also pay

and give another target creature lifelink until end of turn.

This is already well-trodden territory but in case you haven't heard, Heliod is rather broken when paired up with Walking Ballista or Triskelion.

If you give either of these creatures lifelink and use them to ping a creature or an opponent by removing a +1/+1 counter, Heliod will let you put a +1/+1 counter back onto them so you can do it again. It's a 2-card wincon in a color that lets you tutor for artifacts.

Of course, Enlightened Tutor is just one card, but if we look at colorless cards as well there are lots of options. Kuldotha Forgemaster will let us tutor up an artifact and put it onto the battlefield. Both Tamiyo's Journal and Ring of Three Wishes are slow but will do the job in a pinch. Inventors' Fair will also let us go get our wincon.

I could try in today's column to set up a somewhat one-dimensional deck built solely around landing this combo and winning the game with it, but that's not my style. I'd rather try to find some weird and interesting ways to use Heliod whilst keeping the combo wincon in the list for those games where you absolutely, positively can't resist being "that guy".

When We Gain Life

We've got a creature who lets us put a +1/+1 counter on target creature whenever we gain life. If we've got that ability readily available we should see what other cards we can include that care about lifegain triggers.

Ajani's Pridemate is a 2/2 Cat Soldier who gains a +1/+1 counter every time we gain life. Twinblade Paladin has the same ability, but gets double strike as long as we have 25 or more life. Archangel of Thune does the same thing in spades, putting a +1/+1 counter on every creature we control.

Righteous Cause is an enchantment that will allow us to gain 1 life whenever a creature attacks. That includes our opponents' creatures, so this card can put in some real work against token decks. Linden, the Steadfast Queen only cares about our creatures and only if they're White. That's only a problem for me because I got sidetracked thinking about the dozens of White supremacist jokes I could throw into this paragraph but we're building a Mono-White deck, so she'll get along just fine with Heliod. Sunbond is an enchantment that will put +1/+1 counters on the enchanted creature when we gain life, making it an all-star in my Kenrith, the Returned deck. I expect it to be just as good here.

Gaining life when things enter the battlefield is another way to make the most of Heliod's ability. Leonin Elder will trigger whenever an artifact enters the battlefield. Soul Warden, Ajani's Welcome, and Impassioned Orator will let us gain 1 life when a creature enters the battlefield, though the last two only care about our creatures. Healer of the Pride will gain us 2 life, though our commander doesn't care how much life we gain - only that we gained life.

Two weeks ago we looked at the Green Demigod from Theros Beyond Death - Renata, Called to the Hunt. Daxos, Blessed by the Sun is the White card in the THB Demigod cycle. He's got a toughness equal to our devotion to White and whenever another creature we control enters the battlefield or dies we'll gain 1 life. Giving him lifelink in the mid or late game should give us a pretty healthy boost to our life total.

Extort is a mechanic that can also gain us life, though we have to pay the extort cost. It's one of the best things about Blind Obedience. We'll pay 1 mana, cause each opponent to lose 1 life and we'll gain that much life, so it's sneaky good in multiplayer and is worth using as often as you can. Syndic of Tithes, Basilica Guards, and Knight of Obligation are all creatures with the extort ability tacked onto them. I'm not sure we'll include them all in today's list but I'm also not sure we won't.

We're throwing around a lot of lifegain and +1/+1 counters so it makes all the sense in the world that we run a few creatures with outlast. These guys are normally not great. The outlast mechanic allows you to pay mana and tap them to put a +1/+1 counter on them, but you can only do it at sorcery speed. That's often a dealbreaker for me, but with Heliod we should have no problem passing those +1/+1 counters out and these guys will give out some useful abilities. Abzan Battle Priest will give lifelink, Abzan Falconer will give the flying and Ainok Bond-Kin will give them first strike. On their own, these aren't good but in this build they should really be able to help us out.

It might not be accurate to say that I'm starving for more combos in this deck - I'm positively famished! When going through options for cards that might work well with Heliod I came across a hungry little vampire knight from Rivals of Ixalan. I didn't know what the combo was yet but I knew at a glance that this guy could be broken wide open in a format like Commander. It didn't take long to dig up the pieces I'd need to have another combo for Heliod.

Famished Paladin doesn't untap during your untap step, but whenever you gain life you untap him. When you have Resplendent Mentor on the field, White creatures you control can be tapped to gain 1 life. You can now tap your hungry, hungry Paladin as many times as you like, gaining as much life as you like, and putting +1/+1 counters on creatures if Heliod is on the field.

If Resplendent Mentor hiding in your deck, you can win the game with Sorcerer's Wand. This equipment lets the equipped creature tap to do 1 damage to target player or planeswalker. If you used Heliod's last activated ability to give Famished Paladin lifelink he'll untap so you can do it again and again and again to kill the table. You'll also gain a bunch of life, but usually when you're winning the game that becomes an afterthought.

No Combo? No problem.

The funny thing about combo decks is that familiarity to some extent breeds contempt. I find "Mike & Trike" really tiresome, but I had a playgroup for a few years where I saw way too much of Mikaeus, the Unhallowed, Triskelion and its stunt-double, Walking Ballista. Heliod's combo isn't any more clever or nuanced than Mike's, but it's new and it's also not in a color that has quite so many tutors. I included the Famished Paladin combo in this list because I firmly believe if you're going to run a combo you might as well run more than one.

The goal is to play a long game and try to buy time until you can land a wincon or you get enough lifegain synergy and power on the battlefield to be able to start taking out your opponents. If your combos aren't showing up, we've got a few tricks up our sleeves to try to win the game.

If we're in the late game and things are going well, there's a good chance we'll have a decent amount of power on the field. A card like Brave the Elements will give us a free swing on any mono-colored opponents or opponents who simply happen to have only one color of blockers. This instant lets us choose a color and White creatures we control will get protection from that color until end of turn. This can also help us block an attack if we're on defense and need our creatures to survive what would otherwise be a crippling or even a lethal alpha strike.

Felidar Sovereign needs no introduction, but makes a lot of sense in this list. This 4/6 Cat Beast has vigilance and lifelink, but more importantly it will win us the game if we can get to our upkeep and we have 40 or more life. It's not the kind of wincon you rely upon, but it's nice to have things you can play that your opponents will likely have no choice but to have to deal with.

Aetherflux Reservoir is also an obvious fit in a deck that is built to gain life. The wisdom of using the giant laser cannon of doom on anyone but your last remaining opponent is certainly up for debate, but if you are able to get above 50 life and you really want to kill someone, this artifact will do the job nicely.

I've thrown in some of the usual staples for a Mono-White deck, including the White entry in the magus staff cycle - Staff of the Sun Magus. This underplayed artifact will gain us 1 life every time we play a White spell or play a plains. I have the odd habit of running the Red Staff of the Flame Magus in a few of my Red decks and referring to it as "my wincon". It isn't a wincon by any stretch of the imagination, but it gives you a surprising amount of life gain over the course of a game and should easily pull its weight in this list.

I'm more excited about today's list than I was about last week's, and if I open a Heliod, Sun-Crowned in a booster pack I might well build this in paper. It won't ever be confused for a true cEDH deck but should win its share of games and would probably do fairly well in a casual meta.

Last Monday I gave you a column about Haktos the Unscarred in which I neglected to include any damage-based boardwipes. While that's an embarrassing oversight on my part, it's also a reminder that all of us have blind spots and miss things when we put together lists. When I put a decklist together for a new Commander I purposely avoid other people's lists. I don't expect to be the one to find some new combo or synergy, but it means a lot to me that I'm putting out my own work rather than just repackaging someone else's Commander deck.

What do you think of Heliod, Sun-Crowned? Do you think Mono-White will finally have a combo deck that will help make it a slightly more relevant color in Commander? Did I miss anything essential to building a truly great Heliod list? Am I forgetting about some Mono-White Commanders and not giving that color enough credit?