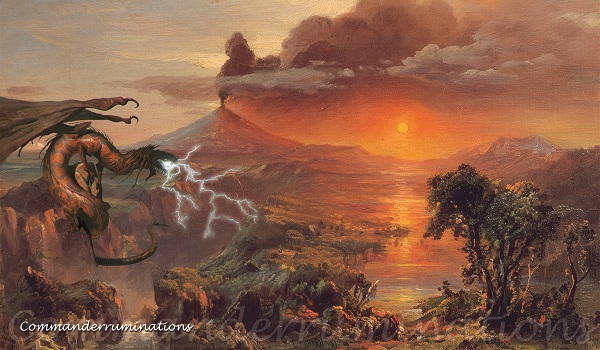 I've been struggling with today's decklist a bit, so before I launch into this column I think it's worth noting that we're probably straying closer to casual EDH than I usually do. My process has involved playing a new deck against three other decks in Tabletop Simulator and virtually hopping from seat to seat so I can see how the deck plays out. It's fun and I highly recommend it, but it can be a challenge.

When testing a deck in TTS, I invariably find myself doing four simultaneous goldfishes.

No, that's not an arcane aquatic double-entendre - I don't hold enough mana up for interaction and don't really play like I'm playing against other people. It's still fun, and I think it gives me valuable feedback on how a deck might play in a real game, but it doesn't really duplicate a real game experience.

I've also found that I wind up including at least one deck that's a bit too much for the new deck to handle. This isn't intentional; I just have a decent number of pretty good decks and can't resist playing them because they're really fun. I pull in my Grumgully, the Generous persist combo deck and the game ends before the new deck has a chance to do its thing. I include my Ramos, Dragon Engine deck and even if I ignore the Conflux combo path, it still manages to kill the table.

These aren't true cEDH decks by a long shot, but I think I need to grab some precon decklists for my Tabletop Simulator environment. How a new deck plays (or even goldfishes) against precons is actually a really valuable data point to include in an evaluation. Having a bunch of old precon lists readily available would make for some fun games anyways, even if they're not all particularly well-tuned.

Today we're going to explore Obosh, the Preypiercer. In my set overview I quipped that Obosh has the most Metal art and the least Metal name I'd ever seen, and I think that holds up.

This Hellion Horror looks like it would have fit in alongside those giant sky worm monsters (the Chitauri Leviathans) from the battle of New York in Marvel's The Avengers. Whether or not the name "Obosh" inspires fear and loathing or just comes across as odd and a little off is up to you. I considered naming my Obosh Dragons deck "Oh gosh, it's Obosh," so I'll just say that I find the name a bit uninspired.

Names and art aside, Obosh brings some interesting abilities to the format. I'm choosing to run Obosh as my Commander, in part because I think the Rules Committee should just ban Companion as an ability and have us run these guys in the command zone. I also think any ability worth building around is worth having access to more than once and as I understand it, companions can only be cast from exile once.

Obosh will double the damage output of both odd-cost permanents and non-permanents, and it means damage, not loss of life. We're in Rakdos colors, so there are a lot of black life loss cards we'll be leaving out. There are a lot of red burn spells we could include, but I've decided to build around one of my favorite tribes: Dragons!

I've got a Lathliss, Dragon Queen deck that I love and I've built a lot of decks around Dragons over the years. Dragons are generally great blockers and it's not that uncommon in a four-player game to have an opponent without a reliable way to deal with flying attackers. The basic question of this deck is a simple one.

Are there enough odd CMC Dragons in red and black to allow us to build an effective Commander deck with Obosh, the Preypiercer at the helm?

Well, the answer is more accurately "yes, but..."

There are a lot of Dragons in the history of Magic. My problem is that I don't just want to build a Dragons deck - I want to build a good deck. I wound up dropping out some of the higher CMC Dragons that might fit the theme that I didn't think I'd be able to reliably ramp into. Rakdos is not the easiest color combination for ramping up to big spells. Mono-black and mono-Red can lean on some things that don't work quite so well in a two-color deck, but that only means this deck will be a little less consistent than we might like.

I was able to line up a nice little army of Dragons.

I've got 11 Dragons in the list, including the ones shown above. Boltwing Marauder will effectively give +4 damage to one of your creatures when another creature enters the battlefield under your control, even if it isn't a dragon. Drakuseth normally deals out 10 damage when it attacks if you can find three legal targets. With Obosh on the field, it will deal 20 damage.

There are a few other Dragons in the list worth mentioning. Skithiryx, the Blight Dragon must be included. With Dragon Tempest on the field, it can do at least one infect damage to someone, which will be doubled if Obosh is out. If you then give it haste and swing at someone for four damage, that becomes eight and you've now got one less opponent to worry about. On his own, Skithyrix won't kill anyone even with damage doubled, but Crucible of Fire will pump your Dragons +3/+3 to make "Skittles" able to kill in one swing.

This brew might benefit from a few more Dragons, but there's an easy way to squeeze more damage out of the ones I've included. If doubling our damage turns our Dragons into serious threats, doubling it again should put us in a position to actually win games.

In my most successful play-test, I was able to sandbag Dictate of the Twin Gods and flash it out alongside a hasty dragon to swing for lethal against two other decks, using Drakuseth damage to clear away blockers. I think I had Boltwing Marauder in the mix, so that +2 bump turned into +8 for each attacker.

This brew has some other fun stuff thrown in to bring a little burn to the game. You never know when a bit of direct damage will make the difference.

I'm not well-versed in playing burn in EDH, so there might be better picks out there. I didn't want to find myself building a burn deck, but I did want a few options. Killing someone at 10 or 11 life with a twice-doubled Lava Spike or Lightning Bolt would feel pretty good, and turning five damage into 10 or even 20 to each opponent with Breath of Malfegor isn't unrealistic.

Last but not least, there are those wonderful pet cards we all love to include in decks.

I love to include Chandra's Ignition in my decks, and in today's list I also run Phyresis for that delightful table kill where you get to enchant a five (or higher) power creature to give it infect, hit it with Chandra's Ignition so it does damage to each creature and each opponent, and with your commander on the field, kill the entire table.

Kolaghan Monument might be nothing more than a Manalith variant in most decks, but it's got an odd CMC and it can turn into a Dragon and swing for 4 (or 8... or 16) damage. My focus on having damage doublers out would normally just be me being overly enthusiastic, but we've got one in the command zone, so that can always be part of our calculations.

Stuffy Doll is the gift that keeps on giving and a fantastic way to get past a pillow fort. Just get someone to swing some huge, non-evasive beater at it, and you can ding your chosen foe for a pretty hefty amount of damage.

I round out the list with some ways to protect Obosh, a ton of mana rocks, and a few of those damage-based boardwipes that an astute reader pointed out belonged in my Hakdos, the Unscarred list.

When goldfishing a deck, I tend to not be very patient. I saw a few games where I just never managed to ramp up to the point where I was able to play my bigger spells. I also saw a few games where I just didn't draw into anything helpful. Ideally you want a decent flow of lands, a few mana rocks, and your major threats at a point in the game where you can afford to cast them. Anyone who has played more than a few games of EDH knows that you don't always get what you want. Decks misbehave, and sometimes you need to not give up on a deck too early.

As I tested this deck I wound up dropping out some questionable cards like Witch Hunt, which seemed like a good idea, but which isn't under your control when it's damaging opponents, and adding in a few top end mana rocks. Mana Crypt and Mana Vault will make almost any deck better, and I wanted to see what this build could do if mana was just a little easier to get.

Ramp and enchantment removal can be a challenge in Rakdos. Our commander costs 5 mana and is sure to get removed if you start to become a threat. Our threats are generally five or 7 mana, and there will be games where it takes a long time to get to where we can cast them. What that means is that this will probably never be able to hang with cEDH decks and will struggle against tuned semi-competitive decks. In a casual game it'll do fine.

This deck should win its share of games when everything goes right and you find yourself swinging for some pretty respectable amounts of damage with your dragon army. The bad games will involve issues with mana and problems responding to enchantments or decks that combo off just a little too quickly for you to actually have your game plan unfold.

Every week I try pretty hard to not screw anything up too badly, so it was disheartening to realize that I slipped last week and included Blighted Agent in my Brokkos, Apex of Forever list as a mutate target. Blighted Agent is a Human, and you can't mutate onto Humans. I have an awesome reader base and astute reader Cory Lewis caught my error and I'd like to thank him and all the folks out there who take the time to comment when they see something isn't quite right.

Commander is nothing if not a complex game with an incredible number of possible card interactions, gameplay decisions and deck-building approaches. It's a deep well, and you should know that every time you find yourself failing to RTFC ("read the frackin' card", or maybe even "remember the freakin' caveat") - please know that you're not alone. We all do it from time to time, and it's great to have those errors caught because it helps us writers work to keep getting better at what we do.

I don't know if I'll wind up actually building Obosh Dragons in paper, but I've enjoyed goldfishing the deck and might even play it on Tabletop Simulator against real players eventually. If you play on TTS and would be interested in getting in a game someday with myself or possibly with other CoolStuffInc.com Commander writers, please comment below. I'm doing my best to keep playing, but my world pretty much revolved around playing and running an EDH league at my local game store, so this has been a rough few months and games aren't always easy to come by. You never appreciate how much of an extrovert you are until you find yourself stuck at home with your usual social outlets no longer available.