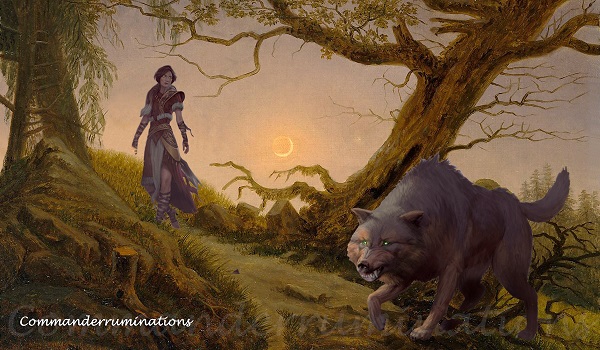 When Morophon, the Boundless was spoiled, it didn't take long for the Commander writers here at CoolStuffInc.com to start talking about all the crazy directions one might take this new Legendary Shapeshifter.

Mark Wischkaemper suggested we could do an entire week of him and Abe Sargent (who still won't admit Ramos is better than Niv-Mizzet Reborn) was all over the idea. I'm still not sure if the estimable Jason Alt will turn in 75% of a Morophon column or if Bruce Richard will be able to throw in his two cents on how to build Morophon, but I'm hoping we'll have a weird, fun, janky series of Commander columns lined up for you this week!

Did you hear that?

I could have sworn I heard something... Ah well, let's get on to the topic at hand and take a closer look at Morophon.

Our leader is a 6/6 Legendary Shapeshifter with the Changeling keyword. That means that he (she? it?) is all creature types. Morophon might be all genders and gender identities too, and I'm totally fine with that. Morophon is all things to all people and is the final and best answer for who you can run at the head of your weird janky tribal deck if there isn't a better tribal commander out there already.

When Morophon enters the battlefield you choose a creature type. Spells of the chosen type you cast will cost

less to cast. That means that if the spell has any colored mana in it, each part of the casting cost that has a color is reduced by one-mana of that color. Other creatures you control of the chosen type get +1/+1, so Morophon also acts as a Lord.

You can choose any tribe, put Morophon in the command zone and he will pump up your creatures and cut your casting costs regardless of how many colors they are in. Aside from Myr and colorless Eldrazi, pretty much any creature type can work with Morophon.

Knights? Morophon will be happy to strap on a sword and shield. He's already a Knight but you could cast Dub on him anyways to give him +2/+2 and first strike and really hammer your theme home.

Gods? Morophon might not help with devotion but he'll go a long way toward helping you to get your Pantheon up and running by cutting out all the colors in their casting costs.

Beasts? Elephants? Specters? Phoenix? Phoenixes? Phoenices? They'll all work if you can find enough members of the tribe to fill out a deck.

That icky, sticky, squicky sound that seems be following me in today's column... it's the sound you hear as my tribe of choice comes crawling around the corner. It will crawl across the floor leaving a trail of delightful slime in its wake. It will creep up the leg of your chair and you will be none the wiser. It will scale the back of your chair and when it takes that last leap onto the back of your head, you will never be the same.

Then I heard that quiet little squicking sound.

It was like something was crawling across the floor behind me, but I was too engrossed in my research to pay attention. Then I thought I felt something brush against the back of my chair, but I was looking at Cephalids and Vedalken and my mind was racing.

And then everything was clear. Everything made sense. I knew what tribe I had to write about. It was as if the clouds had parted and the purest, most beautiful sunlight shone in.

Did you know there are a dozen members of the "Licid" tribe?

Licids are found in all five colors. They can turn from creature to aura and back again. They are affordably-costed both in terms of mana and in terms of actual price. Each one can turn into a different type of aura. Just because one Licid can make a creature unable to attack, that doesn't mean another one can also do that. They each have their own party trick.

Some Licids are best used to enchant your own creatures.

Some are better used to enchant your opponents' creatures.

These adorable little beauties can be attached to creatures to keep them from being able to block or attack. Dominating Licid will work as a Mind Control effect, giving you control of the enchanted creature. Leeching Licid and Stinging Licid will help damage that creature's controller.

Our last Licid might be helpful to attach to your own creature to give it +1/+1, but it might also be useful if someone has artifact removal and you want to turn an opponent's creature into an artifact so that it can be dealt with.

Are you still unconvinced?

Let's take a look at some of the amazing things we can do with a deck full of Licids.

What do you do with a creature that can turn into an aura and back again? You get up to all kinds of ridiculous shenanigans, that's what you do.

With ways to pump up your commander based upon the number of enchantments you control, you can set up your opponents to make bad blocks or bad decisions. They likely won't anticipate that your Licid can turn into an aura at the drop of a hat.

Sphere of Safety is a tax on your opponents for attacking you. If your opponents try to plan ahead and leave up enough mana to send their army your way, you can turn a few Licids into enchantments and throw their careful planning out the window.

With Demonic Rising on the field, you can actively use your Licids to get down to one creature before your end step to get a 5/5 Black Demon creature token.

I'm sure I'm just scratching the surface of things you can do with Licids. If you've got any ideas for what you should do with this odd little tribe, definitely let me know in the comments!

If our theme is to embrace a world of weird, squicky creatures that look like face-huggers or chest-bursters we might as well load up our deck with spells that work with that theme.

How do you do that? You attach a Licid to an opponent's creature, remove it and then use one of these little surprises the unsuspecting victim.

Not all of our on-theme removal can be single-target removal, but all of it should convey the same feel of removing a creature and leaving a token behind.

I'm sure there are great options I'm missing, but hopefully you get the idea. I included Auger Spree just because it always conveyed to me the idea of something bursting out of a creature's chest.

It's worth mentioning that I am aware Licids don't actually do this, but it feels right to me and I'm sure if they wanted to, they probably could. They are amazing little creatures, capable of the most amazing things.

It's worth noting that there are always "staples" for every commander and Morophon is no exception. These first staples will let you cast all of your creatures for free. I kid you not.

Since Morophon, the Boundless can reduce the cost of your chosen tribe's creatures by

and the two cards shown above will let you pay

for your spells, that means you can cast those spells for free. Your amazing discount will only apply to creature spells in the chosen tribe (Licids, of course), but that kind of advantage can go a long way toward winning games.

With Morophon on the field, both Call to the Kindred and Descendants' Path should let you reliably cheat creatures into play because they will always share a creature type with Morophon. Shared Animosity will give Morophon +1/+0 for every other creature you attack with.

I wound up loading this list with a bunch of Changelings, as there are only a dozen Licids and we're already running all of them. I've thrown in Reaper King to give us an extra way to remove threats and he'll be free to cast if Morophon is on the battlefield. If Reaper King gets out first, Morophon and our Changelings will be seen as Scarecrows and will allow us to blow up a permanent.

I don't know when my Licid detached itself from the back of my head, but... I have to say that I'm just so sorry for today's column.

Don't get me wrong - building a Licid Tribal Morophon Commander Deck could be really interesting and in a casual enough meta you could get up to some serious hijinks, but I never expected I'd ever recommend that anyone build a Licid Tribal deck. You'll certainly be the only player in your meta or at your LGS with a Licid deck, and for some people it can be fun to strike out in new directions and do something different.

Did I really call them "adorable"?

Yuck. I don't know what I was thinking.

After writing a column about a Niv-Mizzet deck that was loaded up with two-color dragons, I have to wonder if building a Morophon deck around three-color dragons would work well.

Taking apart my Ur-Dragon deck left me with a pile of Dragons that wouldn't fit well in Niv-Mizzet Reborn. You could dramatically cut the cost of an impressive list of really powerful legendary creatures. Wasitora, Nekoru Queen, Palladia-Mors, the Ruiner, Crosis, the Purger and even big bad Nicol Bolas, the Ravager would all cost a fraction of their original mana cost.

The big challenge with Morophon will probably be getting up to seven mana to cast him.

Commanders with a CMC over six are dicey at best, and if you see your commander removed or countered a few times it can become prohibitively expensive to get him back on the field. For that reason, Morophon will work best in casual metas where you have the time to cast bigger creatures. In a slower meta you might get lucky and not have to deal with quite as much removal as you'll find in a more competitive group.

That's all I've got for you today. WIth any luck we'll have at some fun, interesting takes on Morophon this week from some of our other Commander writers.

If you've got thoughts on Licids, 3/c Dragons, or have any super secret Morophon tech that I somehow missed in my column, please comment and let me know. I'm always happy to hear from readers and love to see the great stuff you guys suggest.