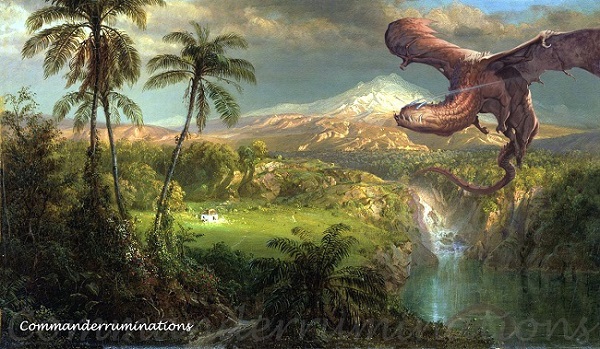 Goad is a neat mechanic. It's brilliant and fun and casual and also somewhat terrible if you're genuinely interested in winning lots of commander games.

All Goad does is force a creature to attack and to attack someone other than you if that is an option. While that sounds great, every benefit you might get from being able to goad creatures goes out the window when you're one of the two last players at the table. Now you're the only player left to attack and if your opponent has an overwhelming board presence, you'll be facing the full might and fury of whatever assemblage of creatures they've been able to put together.

My experience with Goad started and ended with a Grenzo, Havoc Raiser Goblin tribal build I played for a hot minute back in 2017. It was an attempt to take a casual Krenko, Mob Boss deck and do something interesting and fun rather than just tune it up into a more powerful Goblin combo deck. It suffered from a few issues, not the least of which was that people get annoyed when you're constantly goading their creatures. The deck also ran into the problem of not having enough good answers for when you only have one opponent left and Grenzo's party trick of forcing your opponents to attack ends up pointing all of those attackers at me.

Goad may be a little on the casual side but it's still a lot of fun. Today's column is an exploration of what happens when you add a little blue to the equation and reward yourself for your various shenanigans with card draw.

This deck is going to want Dragons, which is cool. I like me some Dragons. The second part of Firkraag's text box tells us that whenever a creature deals combat damage to one or more of your opponents, if that creature had to attack this combat, you put a +1/+1 counter on Firkraag and you draw a card. That means I may get rewarded for goading my tablemates into attacking each other. Those creatures have to get through defenses and do combat damage, but it's still a very blue twist on what originally started out as a very red ability. I like card draw, and even if it has some drawbacks, I also like me some goad shenanigans.

The Elephant in the Room

Firkraag is the face card of the Baldur's Gate "Draconic Dissent" Commander precon. While I've been told that the 2022 Commander precon decks are very well built and worth using as a starting point for getting into this format, I chose to not review that decklist at all when putting my list together.

In the past my experience with precon decks was that they generally seemed to be built as two or three major themes all smushed together. My assumption was generally that you would play the deck, see what you liked and then evolve the build in whatever direction you enjoyed the most. That's a bit of a generalization but I think it mostly holds up.

Before continuing my column, I decided to actually check my list against the precon. I wanted to know if I had accidentally built the same basic deck as Wizards was putting on the shelf at your local game store. It seemed impossible to think that there would be too much overlap.

Boy, was I wrong.

My list, which we will get to in a moment, is built to go all in on goad mechanics with a healthy Dragon theme and enough interaction and removal to get by in a meta that isn't too powerful.

I loaded up with cards like Agitator Ant, Geode Rager and Bothersome Quasit to give me extra ways to goad my opponents' creatures. I threw in Vengeful Ancestor and Warmonger Hellkite so I'd have more Dragons and more ways to force opponents' creatures to attack. I also threw in cards like Curse of Verbosity, Propaganda and Kazuul, Tyrant of the Cliffs to encourage opponents to attack someone other than me.

The deck came together pretty easily and felt like a typical first draft. It had a plan, it synergized around my commander pretty tightly, and it seemed like a good starting point.

Then I started writing this column and decided to compare lists.

Twenty cards. There were TWENTY cards that my list shared with the precon. I swear to you that I didn't peek at the list at all, but somehow my deck and the precon had a significant overlap.

Digging deeper, some of the differences between the two lists were splitting hairs. The precon went with Aether Gale as a sorcery speed bounce spell, while I opted for instant speed options so that I could deal with alpha strikes and chose to run Cyclonic Rift, Aetherspouts and Aetherize. All in all, we're both running Chaos Warp, but I'm running 14 instant spells compared to 3 in the precon. I have long felt that the ability to hold back interaction and cast spells at instant speed is a huge advantage, but we are both running roughly the same number of sorcery spells. We're both running Curse of the Swine, Disrupt Decorum and Spectacular Showdown, and I really only included Curse of the Swine on a whim. It's not a spell I often throw into decks.

The biggest differences between the two lists are my fairly typical lack of Planeswalkers and Sagas. There are definitely ways the precon may be better than my own list. It's running Psychic Impetus and Shiny Impetus, both of which probably should have made it into my build.

My takeaway is pretty simple. Somewhere along the way, Wizards of the Coast seems to have learned how to make Commander decks. I'm assuming, of course, that my own version is going to play well and that being so close to the precon is a good thing.

I think there are some definite hits in my first draft that didn't get picked for the precon for whatever reason. In truth, there's no perfect list for any casual deck, and one might even argue that this applies to any level of EDH because every meta will present its own unique challenges.

Besmirch is an Act of Treason effect, meaning it will let me steal an opponent's creature until end of turn. It will untap and more importantly, it will goad that creature, meaning I can grab a big threat, use it against someone and I'll have to swing it at an opponent. If it does damage to them, I'll get that +1/+1 counter on Firkraag and I'll draw a card, because Firkraag doesn't care who controls the creature that's being forced to attack.

War Tax is a Propaganda type enchantment that lets me pay mana and force my opponents to pay whatever tax I can afford to levy for each creature they want to attack. I won't use War Tax unless I'm either seriously worried about dying or we're down to the last two players. If it's been a long game and I'm up against a deck that wants to go wide, I could seriously shut down their ability to kill me, but it won't do nearly as much against a voltron deck or a deck that doesn't even care about going to combat.

My last cute trick, Mob Rule, was last reprinted in a Crimson Vow commander deck. It will let me steal either big or little creatures, and is a little better costed than Insurrection, which just steals everything. I generally feel like Insurrection leads to a game ending in an unsatisfying way for most players, but Mob Rule feels a bit more reasonable.

As for misses, I definitely think my omission of Solemn Simulacrum and possibly Burnished Hart have to be on the list. I didn't include either, despite the fact that I often throw them into my decks. I also missed out on a number of cards that have to attack each turn like Territorial Hellkite and Chaos Dragon. My focus when building my first draft was on the goad mechanic and I probably should have dug into having more of my own creatures that always need to attack.

It would have been relatively easy to compare notes with the precon and carefully shift it away from what that deck is trying to do and how it is built, but I think it's really interesting to compare this list to the best efforts of the good folk at Wizards of the Coast. I like to think I put together some decent decks, so while Firkraag does somewhat build himself, it's also an indication that this latest set of Commander decks is not to be underestimated. If they are all tightly planned out with synergy oozing out of every pore, or at least enough pores to matter, these precons may well be worth picking up.

If you want to compare my list to the precon, you can view it here. All of this begs the question: did I actually improve upon the precon list or did I fall short?

My inclusion of higher-powered staples like Rhystic Study and Cyclonic Rift makes it easy to think my version is a bit better, but it's possible these are just slightly different flavors of the same basic Goad-themed casual decklist with a healthy sprinkling of Dragons thrown on top for flavor.

I could see building this in a few different directions, but it's hard to argue that focusing on Goad and emphasizing Dragons doesn't make sense. A voltron list or an all in Dragon tribal deck with very little interest in goad cards might end up being more successful in terms of win rate, but I don't think you build Firkraag if you're not interested in goading creatures.

I'll be the first to admit that I was taken aback when I saw how much overlap my list had with the precon, but it could have been worse. If I had over half of my cards overlap I would have probably felt compelled to scrap the entire list and come up with some other plan for the card, but this Dragon probably is going to see his best games in a build like this. He might not win a ton of them, but they'll be fun and if you're packing a little extra instant speed interaction you might even be able to deal with that eventual alpha strike coming at you.

In other news, I got another chance to guest host on Commandercast, the longest running EDH podcast in the whole wide world. Mark Mahler and Adam Traas have been co-hosting that weekly podcast for years and Mark tapped me to jump in for a few episodes while Adam is on vacation. We did a deep dive on all of the background enchantments and talked about various other random things in episodes 486, which aired last Monday, and 487, which aired today. If you've ever wondered how smooth my delivery is or how many times I can say "um" in an hour and a half of podcast, definitely check it out. It's on most podcast platforms and you can also go to their website.

It's a holiday today, so if you're in the states and you are inclined to celebrate, let me wish you a happy Fourth of July!

Thanks for reading! Be safe, have fun and I'll see you back here next week.