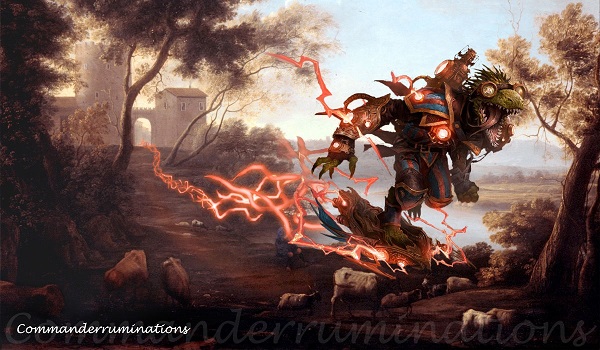 If you've played enough Dungeons and Dragons you probably have a lucky d20. Heck, you might have a favorite 20-sided die even if you don't play any tabletop RPGs. Today I've got two decklists to share with you that might just make you think about such things. I know it's hard to really believe that one or your many dice is more likely to roll higher than other dice, but if you play either of these lists you'll definitely want to be rolling the luckier one.

Today's commanders are Delina, Wild Mage and Farideh, Devil's Chosen. Delina will see us roll a d20 when we attack and make at least one copy of a creature we control. Farideh cares about rolling dice, but just gives us card draw when we roll 10 or higher. That's a 55% chance to draw a card on each die roll, so that's... not half bad. Farideh will also gain flying and menace even if we roll low and don't draw that card.

Since Delina will go into Farideh's 99, but not vice versa, I'm going to start with our mono-Red Elf Shaman. I think these will end up being quite different builds, but each looks like it will be fun in its own way.

The first ever mono-Red elf in Magic is a bit of a puzzle and I do love puzzles.

She'll give me token copies of creatures we control when she attacks. Those tokens will leave at the end of combat, so I'm not going for extra combat steps. I am going to be looking for creatures that give me something helpful when they enter the battlefield. I'm also going to be looking for ways to steal creatures so I can make copies of them, and because I'm willing to play rough sometimes, I'm running a few sacrifice outlets so I can flush them before I have to give them back.

This kind of approach does mean I'll be somewhat limited by the creatures my opponents are playing. It also means that a single Mob Rule could cripple my tablemates if I'm able to grab enough of their creatures.

Delina will have to attack, so I'm running a decent number of equipments that can help her get through blockers. My ETB dudes range from big boys like Meteor Golem and Chancellor of the Forge all the way down to Skittering Surveyor, Solemn Simulacrum, Pilgrim's Eye and everyone's favorite pirate: Dockside Extortionist. Even if I'm just making an army of Goblin Tokens with Beetleback Chief or Siege-Gang Commander, I'm hoping I'll be able to build a decent army and have a pretty fun game at casual tables with this list.

The wincon with this list is usually going to be just going to combat, but if you can get an Impact Tremors or Purphoros, God of the Forge onto the field and make a few copies of Myr Battlesphere, Chancellor of the Forge or a stolen Avenger of Zendikar, you might be looking at a lot of damage you'll be dishing out.

You'll still want that lucky die when you play Delina, Wild Mage, but if you're really looking to throw some plastic around, the next list will have you rolling dice all game long.

What would we get if we took a commander that cares about rolling d20s and loaded their list up with every die-rolling card that would fit into that legendary creature's colors? If we chose to build around the Red/Blue Farideh, Devil's Chosen we'd get something like this next list.

Farideh not only likes it when you roll a d20, he also comes with his own Fireball card. There are a handful of instants and sorceries that care about rolling dice in this list, and the overcosted Wizard's Spellbook gives us some needed recursion. It's unlikely that we'll be rolling 20's again and again, but if we can get this out and use it enough times, it will give us a decent chance at getting some low-cost recursion for some of those spells.

There are even more creatures that can help us on our mission to roll as many dice as humanly possible. Some, like Chaos Channeler, Delina, Wild Mage, and Hoarding Ogre, will trigger when they attack. Aberrant Mind Sorcerer, Djinni Windseer, Earth-Cult Elemental, Scion of Stygia and Swarming Goblins will trigger when they enter the battlefield. Arcane Investigator will just give you an outlet if you've got loads of extra mana and nothing to spend it on.

The number of ETB die roll triggers amongst these cards has me thinking of Deadeye Navigator and assorted flicker spells. Deadeye makes me think of Palinchron, Peregrine Drake and making infinite mana. That makes me think of adding in other infinite mana combos like Dramatic Reversal and Isochron Scepter so we can occasionally combo off with Arcane Investigator, draw into an outlet like Comet Storm and win the game.

Is this the most efficient shell to play the combo game with?

Absolutely not, but we're looking to roll lots of dice, and enough of those cards just led me down the path to combotown. When I'm playing in Izzet I often fall into that type of wincon. You could also drop out your combo pieces and load up on Dragons or any of a few other tribes.

I like that hitting your combo could easily set you up to use those die rolls to draw your deck and win however you want to win. I don't like that these cards seem to be a bit higher in mana, but you're in colors that should let you counter wincons and survive long enough to be able to really get those d20s rolling.

Whether you're more drawn to the aggro of Red or the control and combo of Red/Blue, I think both decks could be a lot of fun. Even with the combo pieces, I don't think either of these push up into high-powered EDH. Farideh is probably easier to tune up with fast mana and better counterspells, but either one would benefit from cards like Mana Crypt and a few tutors.

If I've missed any key cards that really should be in either of these lists, I'd love to hear about them. Let me know in the comments what you've done if you built either of these commanders.

Last week's column about "dEDH" saw a lot of shares and I'm happy to let you know that I've set up a page on my old blog site for updated format rules (you can check that out here). My dEDH dungeon playmat is on the way from InkedGaming.com so hopefully I'll have more news in future weeks about how that is going.