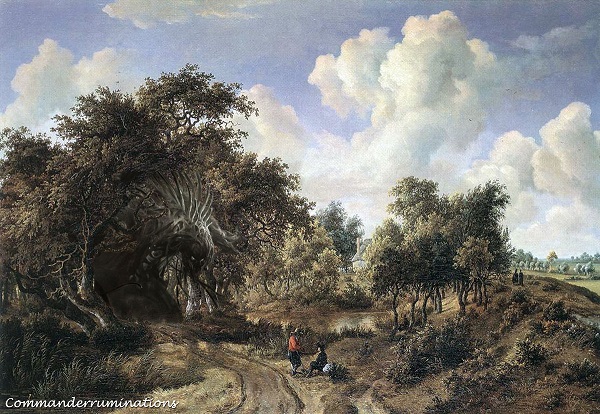 A Wooded Landscape by Meindert Hobbema (1660). Ghave by James Paick.

Earlier this month I spotted someone online asking if Old Stickfingers had cEDH potential. I'm not an expert at cEDH by a long shot, but I enjoy trying to explore new commanders and I like to see if I can figure out how to push a deck's power level up towards the lofty heights of cEDH. I rarely succeed - I'm just not used to building cutthroat decks that want to win before turn 5 - but it's fun to try.

This legendary Horror is quite a puzzle. It's clear we can use him to put creatures in our graveyard, but how do we win, and how do we win quickly?

The first thing to note is that when you cast Old Stickfingers, you'll mill creatures equal to the X value in the mana you spent on casting him. I don't see any reliable self-mill strategy for this card. We're not in Blue so it's not like this commander will open us up to Laboratory Maniac and Thassa's Oracle play lines. We only put creatures in the graveyard, so going all in on self-mill would involve running a ton of creatures and making a lot of mana.

I also don't see myself playing all creatures and trying to make infinite mana as a way to mill my whole deck. Playing cEDH is about winning, and that doesn't win the game quickly enough, even if you're planning on using Twilight's Call to bring them all back at once.

If I'm not going to go heavy on creatures, I think that means I am going to want to build a combo deck. That makes perfect sense if I'm aiming towards a cEDH build. I'm seeing one particular card that feels like it makes the most sense for Old Stickfingers to work with.

Necrotic Ooze has all activated abilities of all creatures cards in all graveyards. That's quite a party trick, but my problem is simple. I need to get to around five mana so I can cast Old Stickfingers and mill three creatures. I might be able to pull this off with two creatures, but my gut tells me that I'll want to be at three or four creatures to make sure I hit the right ones. I will need an assortment of creatures in my deck that include my combo pieces but also probably include "entombers" like Corpse Connoisseur and recursion dorks like Timeless Witness.

I also need to be able to wrap that core in a Golgari shell with enough interaction to be able to handle the incredible demands of a cEDH environment. That means fast mana, to be sure. I'll also need cards that can stop my opponents from winning, without the extra advantage of being in Blue.

When you're trying to build to a higher power level, especially if you're hoping to edge into cEDH territory, you have to know how your deck plans to try to win the game. That might seem obvious, but I've built a lot of lower powered decks over the years that only had the vague plan to squeeze value out of the cards I'd be playing with and hopefully somehow "get there."

With Pili-Pala and either Elvish Aberration or Palladium Myr in the graveyard you can make infinite mana. Since Old Stickfingers is a creature with an X in its casting cost, it also serves as an outlet for large amounts of mana, allowing you to easily put every creature in your deck in the yard. If you've got Walking Ballista, you can just win outright with that.

If you want to get fancy and you've got Phyrexian Devourer and either Ballista or Triskelion in the bin, you can use Necrotic Ooze to win by using Devourer's ability to put counters on it, and then using your pinger's ability to turn that into direct damage.

I have a long-standing habit of building decks that are trying to go in too many directions at once. Just one robust wincon isn't enough for me, and will get boring over time, but in cEDH there is often more value in consistency than there is in having lots and lots of possible play patterns.

Consistency is one of the most important things you can build into a deck if you want to play at higher powered tables. It's not enough to be able to do a cool thing occasionally, if the right cards show up and the stars are properly aligned - you need to reliably be able to present your win condition and hopefully stop others from winning before you can take your shot.

For this deck, my attempt to build in consistency comes in the form of lots of tutors and lots of reanimation. I had originally envisioned a deck with 3-5 creatures at best, but the reality is that there are role players that bring so much value they are hard to leave out.

I'm running lots of ways to pull creatures back out of the graveyard, along with a few ways to bury them. Creatures can play a role in this. While they might get in the way of a clean and simple five mana Old Stickfingers cast to win the game, I don't like the idea of trying to build this as a deck that is so streamlined that it's only got seven creatures in the 99.

I decided to also run Protean Hulk, which to some extent pulls me away from going with an Ad Nauseam build. I can get Protean Hulk to die, I can start assembling pieces of my wincon. Phyrexian Devourer is a possible Hulk target, as are a number of other targets that can help me get everything in place to try to win. I've built and played Hulk lines in Muldrotha before, but doing it in Golgari without Mikaeus, the Unhallowed in the mix is a bit different. One might argue that the Mike should be in my list as well, and it's very possible that after a few games I'd end up adding him to the 99.

I feel pretty good about this list as a starting point, but I'll be the last one to tell you that I'm great at building for competitive EDH. In my heart of hearts I'm just not that cutthroat a player, so my card choices often reflect that slightly more casual mindset. Opposition Agent wasn't one of the first cards I put into this list - it was one of the last, and as I was writing this very sentence I went in and replaced Mox Diamond with Scheming Symmetry. For me, it's not easy being mean, but in cEDH you definitely want to pull out all the stops. Dropping lout cards like Imperial Seal and Mox Diamond might not make sense if you play with proxies, but I generally build and play with cards I own and I almost never use proxies.

If I were in Sultai, I'd likely be going for Thassa's Oracle wins and would have Tainted Pact and Demonic Consultation in the list. That would mean that I'd be running a singleton mana base, but again my filthy casual streak is a mile wide and hard for me to resist. You should absolutely set up your mana base so that it makes sense for your budget, your playstyle, your meta and of course, your sense of humor. My 13 Forests and 13 Swamps amuses me to no end, and for the most part works for me, but I'll never pretend it's the "right" way for you to build your decks.

If you were interested in building a cEDH or fringe cEDH Golgari reanimator deck, I think this is a pretty solid starting point. I would play this list and would surely change it up as I saw what worked and what didn't. As an example, I've played graveyard decks and swapped in cards like Witchbane Orb and Orbs of Warding to give myself hexproof so I couldn't be targeted. That might not seem like a big deal, but I won a few games with an old Muldrotha list after making that swap because I was able to dodge a Bojuka Bog that would have really screwed me over.

I've volunteered to take on Tovolar, Dire Overlord for next week's column. I'm actually going to try to assemble a list and play it this coming Tuesday so I should be able to include those early results in next week's column. I generally dislike playing decks that require me to pay great attention to every spell that gets cast. That means I'll need to focus a little more and chat a little less if I'm going to stay on top of the day/night state. I might throw in a Managorger Hydra just to give me a little extra incentive to pay attention to each spell being cast.

If you're an old hand at building high-powered reanimator decks, I'd love to hear what I might have missed in today's column. I think it's a good first draft at a Necrotic Ooze combo list, but I'm sure lots of you are wondering how I left out certain cards. Leave a comment and let me know what I missed out on today.