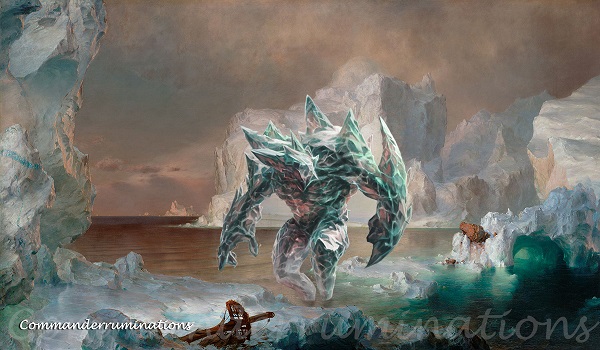 Last week's column was a dip into more competitive deck-building with a look at Korvold, Fae-Cursed King. At the tail end of that column I invited my readers to help me pick what legendary creature from Throne of Eldraine I would tackle next.

The always insightful Joseph Chen had some thoughts about lore and the extra value of Seals in sacrifice-oriented decks, but another reader beat him to the punch. Duel Thyer expressed interest in seeing a column about this little fellow from Throne of Eldraine.

Grumgully, the Generous is a 3/3 Goblin Shaman who costs

and has a pretty unassuming party trick. When he's on the field each other non-Human creature you control enters the battlefield with an additional +1/+1 counter on it.

At first glance I didn't see why anyone would get excited about this little, blue, red-bearded Goblin Shaman, but I love a challenge. I thought about it for a while and realized that I had a combo deck on my hands.

Grumgully's party trick might not seem like a big deal. You can play a creature and give it an extra +1/+1 counter. That might work well with Avenger of Zendikar as all of your 0/1 Plant creature tokens would get start out able to swing for at least 1 damage. Marwyn, the Nurturer would be one-power closer to being able to combo off with Staff of Domination. I tend to think about cards I'm familiar with when I start to brainstorm around a new legendary creature, but the secret sauce for this deck is creatures with the keyword Persist.

I was able to find six cards with the Persist keyword in Red and Green that we can include in this list. When a creature with Persist dies and it doesn't have a -1/-1 counter, it is returned to the battlefield with a -1/-1 counter on it. With Grumgully on the field, it will also get a +1/+1 counter. Those counters cancel each other out, so the creature won't have either counter.

Some of these creatures have interesting abilities. Aerie Ouphes will do damage equal to its power to target creature with flying and is the only one that can sacrifice itself to its own ability. Furystoke Giant will give your creatures the ability to tap and do 2 damage to any target until end of turn. Sadly, those abilities don't stack, so it won't become 4 damage with the second ETB and 6 with the third. Lesser Masticore may make you discard a card when you cast it, but will let you pay four mana to do 1 damage to target creature.

Scuzzback Marauders and Thunderblust don't have enter-the-battlefield abilities but that doesn't mean they aren't worth running. The best of the lot is a card that actually sees play in Commander decks. Woodfall Primus will let you destroy target noncreature permanent when it enters the battlefield.

We're going to want our Persist creatures to die a lot. That means we're going to need a sacrifice outlet for all of them except Aerie Ouphes, which can sacrifice itself even if there are no flyers for it to target.

Goblin Bombardment and Blasting Station should both let you kill the table. Greater Good will let you draw through your deck until you get to a card you can win with.

This is a combo deck and our ultimate goal will be to loop a Persist creature with Grumgully on the field to close out the game, but that doesn't mean we should build this deck with only combo in mind. Since we can reasonably expect to have lots of creatures with +1/+1 counters on them, it made sense to build around that mechanic.

Armorcraft Judge will help reload our hand, drawing us a card for each creature we control with a +1/+1 counter on it. Inspiring call is an instant that does the same thing and will also make those creatures indestructible until end of turn. Bramblewood Paragon, Crowned Ceratok, and Tuskguard Captain all share the ability to give trample to creatures we control with +1/+1 counters on them. Longshot Squad, like Tuskguard Captain, has outlast, but instead of giving trample it will give reach so we can block flyers.

Rishkar, Peema Renegade will enter the battlefield and let us put a +1/+1 counter on each of up to two creatures. The big deal about Rishkar, other than his always helpful expertise, is that he'll let our creatures with +1/+1 counters on them tap to generate a Green mana.

It might be an indication that this deck might have some potential if I started out a section about value and ended up describing a combo.

I wound up building this deck not in my usualy 8x8, 9x7 or 7x9 pattern, but in a 6x10 pattern with an extra four cards tossed in for good measure. I think the fact that I had 6 Persist creatures led to that, but it might have been for the best. I wound up dedicating two "slots" of 6 cards each to card draw and another two "slots" to ramp. I might have gone a little too light on removal, but my first drafts are usually that way. I get distracted by the fun stuff.

If you wanted to trim down the budget of this list, you could drop out the tutors, including the pricey Survival of the Fittest, run more basic lands and you'd probably be fine.

As with any combo deck, you might find that it gets boring going after the same types of wincons again and again. This list isn't built to go super wide or super tall very easily and you won't be winning any games with commander damage. The longer games go, especially at casual tables, the more likely you'll wind up drawing into the right card to let you combo off and win. You might also be able to squeeze enough value out of your +1/+1 counters to win a few games the hard way - on the battlefield without any infinite shenanigans.

All in all, I don't think anyone will mistake this for a cEDH list, but you should be able to have a lot of fun and definitely win your share of games in a casual or semi-competitive meta.

I have to admit that if I were in the market for a new Gruul deck, I'd probably build this in paper. I love decks that leverage cheap, weird or long-forgotten creatures. Running six Persist creatures solely because they'll combo with Grumgully, the Generous even if they're not all very good on their own is the kind of deck-building I can get behind.

Grumgully was a fun puzzle to try to solve, but to some extent every legendary creature is like that. You never know what crazy, weird or hilarious things you're going to wind up trying to get away with when you build and play a janky casual deck.

I've got one update on a recent project. My MLD (mass land destruction) Atla Palani, Nest Tender deck has won two games already but I still haven't managed to turn everyone's lands into creatures, turn my creatures into eggs, and then boardwipe to close out a game. I was able to kill an opponent by swinging with all my lands turned into 2/2 creatures, but I haven't yet lived my goofy MLD dream.

If you've got any suggestions for what I write about next week, please share your thoughts with me in the comments. Today's column was based upon a suggestion by Duel Thyer, and it wound up being a lot of fun. If I don't get any requests I'll probably write about Chulane, Teller of Tales, but I'm not sure my build will be all that different from other builds people are making in the Commander community.

That's all I've got for you today. Thanks for reading and I'll see you next Monday!