A heavy storm rages outside, as though to state the final end of autumn. Wind lashes at the monasteryâs walls, yanking and pulling on any object not flush with the stone. Two windows have already broken, and you are sure there will be more before the tempest subsides. Rain splatters hard against skin and stone alike, keeping everyone indoors.

It is a perfect night to visit Issar Roon.

The hall to the old manâs nook is open to the weather, but you are in luck. The wind is eastern, and the corridor remains dry. Rugs and other furnishings weak to the elements have already been hidden away by a servant, leaving the space bare. Though the eaves are as long your forearm, you know that this fusion of wind and rain could easily damage anything left out in the open.

You knock, but there is no reply. A second knock, and again only silence. You decide to check inside.

You see the old man sitting in his chair, so you push the door wider. As you lift your foot across the threshold, his voice finally acknowledges your presence.

Ah, there you are! I knew you would be appearing tonight, but with this ruckus, an old man like me is unable to hear you coming.

You donât believe for a second that the old man cannot tell when you arrive. He has known of your arrival too many times in the past when you were silent and unseen. 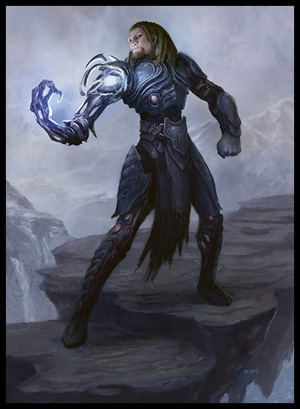 I have prepared a tale for you tonight. One I think you will enjoy. It is about another of the new planeswalkersâa dark, sinister man. He has no friends, and he relies on his strength for success in life. Not just physical strength, but an intelligent, financial, and social strength. He takes advantage wherever he can find one and gives back nothing. His name is Tezzeret.

Tezzeret grew up on the plane of Alara, or more specifically, the shard of Alara called Esper, just before the Conflux. It was a world devoid of red and green mana, built upon the powers of blue, white, and black. As such, it was an orderly world, structured in how its rulersâcalled Etherswornâsaw fit and united by a material named etherium. Yet, etherium also divided Esperâs inhabitants. Tezzeret was born into the lowest of that division.

Tezzeret lived in a slum called Tidehollow, and he was the only son of a scrapper and a washed-up whore. His parents cared for him not, though they fed him, which was more than some. He grew up never feeling a drop of warmth for his parents, and he only found happiness when he created mischief with his peers. Indeed, his peers were who named him after a Tidehollow slang word for an improvised weapon.

Still, we are all tied to our parents in one way or another, and it was his parents who helped to shape Tezzeretâs philosophy of life. When he was seven, he watched his be mother run down by an indiscriminant guildmasterâs carriage as she begged along the streets. After running to get his father, the two worked to clean the body from the gutter. It was then that his father said the words that were forever imprinted upon the young Tezzeretâs mind: The strong rule and take whatever they will from the weak.

With his mother gone, Tezzeret was put to work helping his father salvage etherium from cesspools, scrap heaps, and other garbage in the slums. Over the following years, he learned of a valuable skill he possessedârhabdomancy. It allowed him to find and sort metals without ever needing to see or touch them. In this way, he easily located minuscule pieces of etherium much faster than his father, and the elder soon became lazy thanks to his sonâs skills. Tezzeret took advantage.

Even at the age of nine, Tezzeret was calculating and cunning. He began to hide a portion of the etherium from his father. Yet, he always made sure to get caught at the appropriate time so that his father would not suspect the full scope of his activities. He also rose to prominence in local gangs, leading and directing his peers. Tezzeret was a successful child by some standards.

A couple of years later, Tezzeret set out on a quest to attain great power. He fled Tidehollow with a tiny fortune of etherium hidden under his skin and hair. He apprenticed to an artificer. Using his intelligence and gift with metals, he mastered the old manâs knowledge in three years. Tezzeret then fled again.

Before continuing once again toward his goal of power, Tezzeret took time to replenish his spent etherium storesâ.â.â.âand multiply it. He set upon bandits who carried small amounts, discovered caches hidden across Vectis City, and took the metal from wherever and whomever he could. Before long, Tezzeret had enough etherium to apprentice in the Mechanistsâ Guild.

Tezzeret had already mastered basic artifice, and so set about learning all he could on manipulating magical artifacts. He flew through lessons and knowledge, far surpassing richer and more prominent novices. Tezzeret completed a seventeen-year apprenticeship in just five years.

To celebrate his success, Tezzeret completed a task he had envisioned since he began collecting etherium for his father so long ago. He replaced his right arm with an etherium limb, finally attaining some semblance of power in the eyes of Esperâs elite, for only those with power were given etherium for their bodies. With this act, Tezzeret gained notice, and he was admitted into the Academy of the Seekers, Esperâs premier school for mages.

I believe that is enough for today. I have started with Tezzeretâs childhood so that you may understand how and why he became the depraved soul he is today. In the future, I will expound upon my tale and tell you more of what and who he is. Until then, know that Tezzeret is not a âwalker you should contact of your own volition.

The old man turns away, signaling the usual end to his stories. Intensely intrigued by todayâs, you almost ask for him to continue, but you are afraid of the old manâs temper. You decide that it is perhaps better left for another day. The old man always tells you more eventually.