Hello folks! I hope that you are having a great day today!

Over the last few weeks, I've been hacking together some decks featuring leaders from Kaldheim! Here they are in case you want to check them out...

What's my fourth choice? It's this fun God... 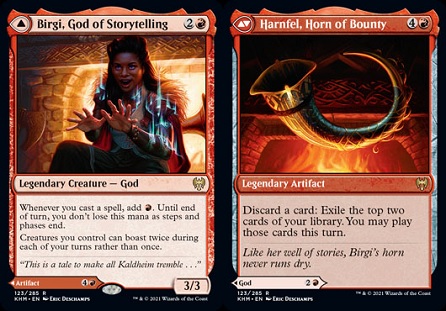 Building Around Birgi, God of Storytelling

Welcome to Birgi, God of Storytelling as well as Harnfel, Horn of Bounty. Or as I like to call her, God of Combos. Birgi is nasty at the comboing. Here's what I want to grab.

And there we have it!

Let's look at some cards we'll run in this set of nine things for the deck!

Let's open with this amazing card for my Birgi build! Krark, Ruler of Craziness. Here you want to lose the flip. If you win, then you get a free copy which is great for the races. Awesome possum, right? Right! But if you lose then you still got your triggers and other things, but you can recast the spell again. Hey, any one-drop is free so you can get multiple triggers when losing the coin flip you'll be doing with Krark, and a win is still a double spell.

Did you see Wheel of Misfortune in Commander Legends? It's awesome! In a four-player game, you play a subgame of choosing numbers and then some will Wheel of Fortune and some will take damage. This is a fun way to get some card draw on! And some life lost as well. I've seen serious life loss in the double digits when people really wanted that Wheel of Fortune effect.

Obvious triggers say, "Hello!" This pair of pals clearly works well together, and we have a lot of ways to maximize them like kicker, flashback, and Krark. These win you the game, and are great options for Birgi to Break. I love them here!

Goblinslide? Sure! It might force you to spend a mana to make a 1/1 haster, but Goblinslide is better in some ways than the above triggers as it'll work on the five planeswalkers, ten artifacts, and three enchantments pretty nicely. There are only 14 creatures in this deck but 37 sorceries and instants, so you really like this noncreature trigger even with the mana. Kill away with Goblin tokens!

In a deck with extra mana for each card played we really want to reduce the cost of things. Enter Ruby Medallion, which is good in any Red deck but amazing here! Your two-mana spells can now be free as well! Pretty good stuff, right? Right!

This pair was what I was referring to when I talked about an anti-EDH slate of cards. We also have Stranglehold in here as well as Torpor Orb. The latter shuts down an entire block of enters-the-battlefield triggers which we don't have save for Solemn Simulacrum and a couple others. This set of four cards is great at shutting people down and out.

This is my favorite non-Mountain land in my brew. We have a bunch of sorceries and instants and a key one each turn, like Wheel of Fortune, can be made uncounterable by tapping this for mana and spending two life - easy in a 40-life format. I really like it here!

I had mentioned before that I have some planeswalkers in here, so which ones made the cut?

Chandra is good for this deck's card flow. Chandra, Pyromaster version was the first 'walker that I added to my brew. Her 0 ability is why, giving you a free spell each turn. Don't forget her +1, which can poke a small dork to kill it. Chandra, the Firebrand was the next card in. She is here for her -2 Forking although, again, don't forget her +1 should it be needed. I also tossed in Chandra, Torch of Defiance.

Two more planeswalkers entered in this order. Jaya Ballard is good at making Red mana for instants or sorceries, which is great here! Right? Right! Her other +1 is studly as you can turn up to three dead cards like lands into winners. The last 'walker I added wasKoth of the Hammer and he is here because of that -2 that can net you a ton of mana in a ritual sense. His +1 is pretty good at dealing some damage out of nowhere with a Mountain. Unlike modern animation of land templating, he does not also give it haste, so make sure you don't animate the land that just arrived.

I know I tossed in Torpor Orb, but I couldn't skip by this pair. You aren't likely to have them both out at the same time. And if you do, just don't pay the kicker of the first Human Wizard. Finding bodies that play defense rather than offense is key as we aren't winning this game with a big punch. So, a 1/3 body for 2 mana that can hold the fort is key. You can drop it without the kicker all day long, but with kicker it's a solid option. Anarchist is a classic and will recur a sorcery on arrival. Don't worry too much about the Orb as it typically gets killed but it sucks up removal and targets from the key things in your build that actually win the game.

How could I not run this bad boy? In a deck with as many sorceries and instants as this? This is a pretty powerful card here as you can net twice the cards and spells for your triggers. This is one of the best cards in the deck! I also dug deeply into flashback and added in cards like Lava Dart and Firebolt. Note that they are cheaper with this than their normal flashback so this still works with that, and Firebolt is then free with your Birgi. Don't sleep on this bad boy!

And don't sleep on Pyromancer's Goggles either! The Goggles are great fun for a mono-Red build. Good stuff here! Ramp and fork and ramp and fork. Fun awaits!

Look at this crazy pair! The former was just banned in Legacy! Let's take this Zombie Wizard for a spin in Commander, shall we? It's another 1/3 for 2 mana to create a fun body. Swing with it (it's likely to survive with its bigger butt). Now you can freely cast a cheap instant or sorcery, which is a lot of this build. Then you net a Birgi trigger for mana and other triggers from things like Guttersnipe. You do lose the card, but it was free! Look at the latter Elemental. You'll be casting a ton of Red spells. It grows up to 4/4 for your investment. Then you can pull off counters for mana to use for your spells along with Birgi's mana - and then load up all over again. It's my second favorite card in the build after Krark.

Speaking about recent bannings, Tibalt's Trickery just banned in Modern! Wow that was fast Tibalt! I love you too buddy, but that was super fast. It broke Modern by letting you cast a free nasty big beater like an Eldrazi Titan or anything else you wanted. Note that this counts as a cast so you can turn it on yourself and get three triggers - one for the spell, one for this, and one for what you replace it with. Although the replacement might be something like a dork or artifact, so you aren't guaranteed a Young Pyromancer or friend firing. Good stuff though!

A storm card cast at the end of your Birgi-fueled turn can be pretty strong, right? My favorite is Empty the Warrens. Enough Goblins can win the game. Pretty strongly. Even if your storm count was just three, that's eight 1/1s for 4 mana. And in a turn in which you have gone off with a draw seven like Magus of the Wheel? You could easily be making 14 or 16 Gobbos. It's good stuff. I also enjoy Grapeshot You can shoot down dorks, planeswalker, finish off players, and more all with a nice storm count. It's not as good as the token-maker, but it'll work nicely.

Let's look at one more pair of cards and call it. The main reason these are in the deck? Those last three words! They each will destroy a land and let the person targeted fetch out a basic land and then shuffle up. They are great to winnow non-basics like Volrath's Stronghold and Gaea's Cradle that dominate the game. They also don't cost you a card either, which is good for the team and the cause!

And there we go! Anything in here that I missed or that you want to check out - see below with my decklist for the full 100!

And there we go! What did you think of my build? Anything in here that inspired you or that you want to pounce upon? Just let me know! See you next week!