There is so much change that is hitting Modern right now. I like to think of metagames in ecological terms, and what has basically happened to Modern is that the apex predator has been taken out, and an incredibly power invasive species (no offense, Stoneforge Mystic) has come from Legacy to attack Modern. It's a strange reality that adding in more possibilities sometimes decreases what is possible - Flametongue Kavu took out a ton of potential from Standard when it existed, and I expect Stoneforge Mystic will end up being powerful enough that from a similar standpoint, it will shove many things out of the way.

I have been thinking a lot about what kind of Stoneforge Mystic decks I might want to build. Unsurprisingly, my first thought drifted to my favorite Legacy deck, Death and Taxes, and how much closer the Modern version of "Death and Taxes" (quotes purposeful) is getting to the Legacy version. Even with the 'non-bo' of Leonin Arbiter and Stoneforge Mystic, I'm almost at the point where I'm thinking about those cards together.

My awesome Magic-buddy and Misty Mountain Games owner Brian Kowal found his brewing noggin going too, and he ended up publishing this on his Twitter:

Somebody else probably thinks this would be fun too pic.twitter.com/ot8Psd6kOz

While not exactly Death and Taxes, it shares a lot in common with it. His was not the only list that I saw in the last few days focusing on exploiting Stoneforge Mystic. Of course, that is to be expected. In addition to Death and Taxes variants, I found myself thinking about various Stoneblade builds that might be possible, including some classic Cawblade ideas.

However, "contrary-wise" (to quote Deadwood), I started thinking about Modern from another angle: what is possible because of the devastation to graveyard decks? Mainstream graveyard decks like Arclight Phoenix and Dredge are deeply hurt by this and other more marginal decks like Goryo's Vengeance or "Eight Balls" all take a hit from the change. Our apex predator - the Hogaak, Arisen Necropolis decks - are just extinct. What absent deck might take advantage of this?

Something clicked and I realized that Eight-Rack just got a massive boost. And, importantly, the massive discard plus good access to creature removal made me feel like equipment-based cards like Stoneforge Mystic might be vulnerable to this strategy as well. 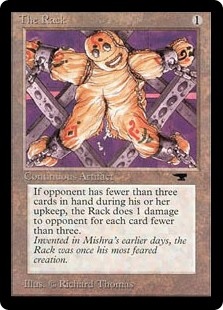 In a Faithless Looting-world, one of the real risks with discard decks is that you just enable a graveyard deck. Certain cards like Delirium Skeins or Wrench Mind almost have a secret text that says "you lose the game" on them. With a larger absence of those decks, The Rack decks get a massive boost. When you add onto that the potential for new cards from the most recent sets to come into the mix, things start looking very interesting indeed.

These cards were immediately on my radar. Discarding Nether Spirit to Smallpox sounded amazing, despite the potential to turn on your opponent's creature removal cards - only Path to Exile feels particularly relevant given the continuous returning of the Nether Spirit, and even there, the payoff in mana seems fine. Nether Spirit was intriguing enough, that I briefly was contemplating extra copies and main deck Relic of Progenitus to get rid of an unwanted Nether Spirit in the yard, but for now I feel comfortable with just a single copy.

Nurturing Peatland and Silent Clearing are great additions to this deck, helping provide early mana stability while being great fodder to get rid of later in the game. While this does mean that they increase vulnerability to Blood Moon, for now, I know I want to try several copies; in the end, I'm not confident I will end up with three copies and a higher land count (25 is my current idea), but I know I have been enjoying it starting there, and we'll see how it develops.

Of all of the things to bring up, the first is the "extra" The Rack: Davriel, Rogue Shadowmage.

Here's the thing about Davriel: I'm not sure if this deck even wants one, or if it wants three or four. I keep having wildly different experiences with the card, and I'm completely uncertain if the deck wants to run it without Ensnaring Bridge, or whether it is good completely on its own. In an Ensnaring Bridge build, I think Davriel makes far more sense, and I could even see it being more prominent - to make this deck more like that, you could cut the Nether Spirit and a Nurturing Peatland for some copies of Ensnaring Bridge - perhaps even just one! - but I'm not sure I want to go that route. For now, I'm happy to start with experimenting with a single copy and keeping the extra in the sideboard.

Long-time Eight-Rack fans will notice that Funeral Charm has exited the building. I love Funeral Charm, and I could see putting it back in at some point, but for now, I'm using Liliana's Triumph as a sometimes-discard spell and always-kill spell, and Blackmail as an additional cheap discard. Blackmail, at least the first copy, has consistently been a powerhouse for me in such a heavy discard deck, and I like it a lot more than the fourth Thoughtseize. I'm even keeping an eye open to potential cut the third Thoughtseize for another Blackmail.

Astute players might wonder where Wrench Mind is. Frankly, I think Wrench Mind might well be in the worst place its ever been. Stoneforge Mystic can easily mean that Wrench Mind is a very expensive Raven's Crime. In addition, artifacts are everywhere right now. I've typically loved Wrench Mind, but now is not its time.

Nether Spirit is a house. In a way, it sometimes feels like a very versatile "ninth" The Rack, in that the card is relentlessly damaging and hard to deal with. There is absolutely a world where more copies of this card might belong, using Liliana of the Veil, Collective Brutality, and Delirium Skeins to fuel discarding it, and just accepting it messing with itself if you run a few copies. For now, I feel great about a single copy, and I'm unsure where to fit more, especially since I'm already shaving into my "The Racks" (The Rack, Shrieking Affliction, and Davriel, Rogue Shadowmage).

The copies of Snow-Covered Swamp might seem a bit kooky. Ultimately, I'm just trying to signal Dead of Winter to potential encourage an opponent slow up their aggressive draws, but not make them fear dropping a bigger creature which Bontu's Last Reckoning can manage. This flourish is completely not necessary to follow through on if such minor mind games aren't your thing.

The extra removal in the sideboard includes some versatility to get around Meddling Mage. Ratchet Bomb, Damnation, and Force of Despair can all take out multiple critters at once, and then there are more specific cards like Collective Brutality and Noxious Grasp to help out in the right spots too. Force of Despair is currently an experiment, and a more conservative choice like a second Bontu's Last Reckoning would totally be good, too.

This card - Wrenn and Six - all by its very lonesome makes Eight-Rack have to worry. Currently, my cards to help deal with this hitting play are Ratchet Bomb and Noxious Grasp. Noxious Grasp has enough utility in enough other matchups I could see finding room for another copy. Ratchet Bomb is a little slow, but certainly worth thinking about just for Wrenn and Six. Other cards I've thought about are Hero's Downfall, The Elderspell (great with Liliana of the Veil and Davriel, Rogue Shadowmage), Plaguecrafter (mediocre in this role, I think), and either Pithing Needle or Sorcerous Spyglass. I haven't played enough against Wrenn and Six to fully have a position on what the best way to manage the card will be, but I know enough to know I need to be thinking about it.

I'm not currently running either Dark Confidant or Asylum Visitor, and I'm mostly okay with that. If you love this card, shaving into Davriel, Rogue Shadowmage in the sideboard and the Waste Not is a totally reasonable option. Both of these cards are also card advantage engines in slower matchups, and I'm using them because I think they are harder to manage than a creature, but it is completely fine to just take a more conservative approach with an all-star like Dark Confidant or to use a Tom Ross special like Asylum Visitor.

I think there are a lot of unanswered questions for this archetype right now, and that is part of the appeal to me. How many The Rack variants? Is this the moment for Ensnaring Bridge? Is Nether Spirit right? What about more copies?

I'm still working on those answers, but I do know that X-Rack feels great. Just remember, draw, always and every time.