In this article we will review multiple Modern decklists featuring a new two-card combo with Acererak the Archlich. My early testing will be discussed along with the viability of the strategy.

Acererak the Archlich makes Aluren evil in Legacy. You can return the Black creature to your hand as many times as you want, as long as you venture into other dungeons and never complete the Tomb of Annihilation. Every time you speed run through the Lost Mine of Phandelver you can create a treasure, drain a foe for one, and draw a card. You will win the game and can even beat infinite life with the help of Mind Grind (or *sigh* Thassa's Oracle).

In Modern, we don't have Aluren. We do have Rooftop Storm, which is less strong but far more cool. Now you can cackle as lightning brightens your laboratory, leaping between coils in a painful brilliance. You will harness near infinite power. You will touch the divine. You'll have mastery over life and death. Your work would make Stitcher Geralf proud. 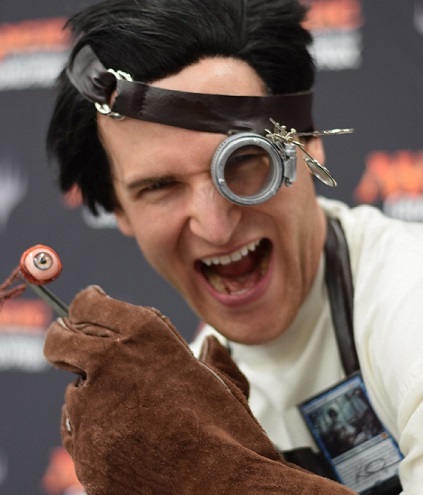 Having copslayed as the legendary skabaren, I felt duty bound to test this combo, for science! I was fearful, as achieving six mana in Modern for Rooftop Storm is harder than stealing corpses out of the sacred grafs of Thraben. However, Ad Nauseam also needs that much mana to combo with Angel's Grace. That archetype is comparable to what we're trying to achieve, and it makes sense to begin with a similar framework.

The advantage to playing Acererak the Archlich over Ad Nauseam is that our combo requires fewer cards, simply four of each in the decklist. This allows us to include more interaction and metagame calls, such as Teferi, Time Raveler. Now, it is true that Ad Naeseam's combo pieces can also keep you alive, after a fashion. Think Phyrexian Unlife. Their combo can win on the stack; ours avoids sorcery-speed interaction. Overall, the strategies have much in common, especially if they both rely on suspend spells.

This is a problem. Multiple tier-one decks bludgeon people with similar costless spells, and your foes will come prepared with Chalice of the Void and or Void Mirror. If your strategy depends on Lotus Bloom and Profane Tutor, you're getting more hate than a fringe deck deserves. You might as well play Glimpse of Tomorrow, which can win on turn three. I wrote about this hilarious strategy here.

It is difficult to attain the heights of 6 mana without Lotus Bloom. And although you can deposit Rooftop Storm in the graveyard with Unmarked Grave, there's no cheaper way to get it out again, apart from yet another suspend card, Resurgent Belief. If you're using Green to ramp out a 6-drop, the question is why you're not playing Primeval Titan. Perhaps this combo is less vulnerable to Blood Moon?

This version seems reasonable. Using Arbor Elf and double Utopia Sprawl, I cast the combo turn three. Unfortunately, my opponent had Solitude. The presence of that incarnation and Unholy Heat makes your 5/5 more vulnerable than you might guess. At least I drew a second one and won a few turns later.

It's possible we should go harder into Arboreal Grazer, Hard Evidence, and Deadly Dispute. More on that new Black instant later.

For this next decklist, I avoided Profane Tutor to make myself less vulnerable to Chalice of the Void. Instead, I played Grim Tutor, a worse card but one that fits into our curve before our intended turn-four win.

In testing this deck, I found that Grim Tutor wasn't the problem. It was our turn-four clock. Against Hammer Time I was a turn too slow. Against Murktide Regent decks, they disrupted me better than I could disrupt them. I suspect Ad Nauseam would have similar problems.

I decided to try Grixis. Prismari Command is a great combo enabler. Not only can it ramp or filter our cards, but also it can kill Chalice of the Void in our upkeep. I also wished to test the new Deadly Dispute. It is better than Village Rites with Grief in decks that also care about the ramp.

Casting Deadly Dispute on Shambling Ghast gives us the two treasures we need to win on turn four. Though this deck has significant disruption with Grief, I still felt underpowered compared to tier-one decks. This is to be expected with an unrefined list. I liked Hard Evidence more than Shambling Ghast. The 0/3 stops Ragavan, Nimble Pilferer and puts you up a card when they bolt it. I did test a version with the thieving monkey, for ramp, but for that card to excel you need lots of kill cards like Lightning Bolt. Ragavan is less good when we want to suspend Profane Tutor; it's reasonable, but if you own that pricey monkey you likely would be better off playing another deck.

I decided it was Lotus Bloom or bust. With four Prismari Command and four discard spells, I believed I had a good chance of forcing it through for the turn-four win. I tested Vessel of Volatility as a substitute for Pentad Prism. If the format were hateful toward artifacts and not enchantments, it likely would be worthwhile, but with Force of Vigor the most common answer, go with the stronger artifact.

Even with this refined list, I believe we are no better than Ad Nauseam, a deck that struggles to cling to the tier-two precipice. Not only does Hammer Time beat us straight up, but also we're playing card types that are being hated out because of it and other stronger combo decks. If you're instead interested in beating your foes to pulp with blunt equipment, try my version. My excitement has also renewed with Elemental Tribal, similar to my posted list but with more Chalice of the Void and Endurance.

It's important and fun to put new cards through their paces. If you're buying into Acererak the Archlich in Modern it's likely because you have different tech to try. Or you better understand this archetype and think you have what it takes. If so, please do let me know your evil scheme.