Once upon a time, a good queen wished for a daughter with hair red as a rose, a personality fiery as an inferno, and pyromancy magic powerful as a Planeswalker's ultimate. She hoped her princess would one day dominate the casual tables in a new format called Oathbreaker, where your commander is a Planeswalker, and as long as they're in play you can cast their signature spell.

Rest your feet by the fire, and soon you'll learn of a flavor-first decklist of Rose Red and the Seven Dwarves followed by a second one featuring another new Throne of Eldraine card as a signature spell, Sundering Stroke. First, let's continue our story.

Sadly, after the birth of her daughter, the good queen died. The king remarried an evil queen, who was none other than, yes, of course, Tibalt, the Fiend-Blooded. Evil Queen Tibalt had little better to do than groom himself and ask his magic mirror, "Mirror, Mirror, on the wall, who is the fairest of them all?"

"My queen," the Mirror answered, "Rose Red, the princess is the fairest in the lands." At this Evil Queen Tibalt flew into a rage. He hired a huntsman, Crown-Hunter Hireling, to cut out Rose Red's heart. 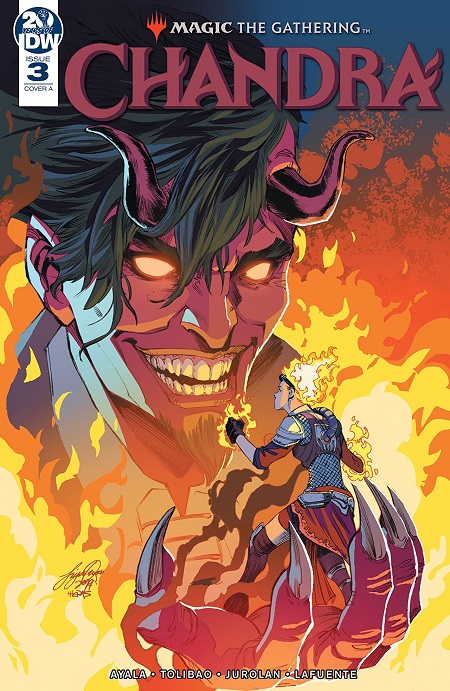 The huntsman led Rose Red into the mountains, but her fire was too lively and he didn't dare try to cut out her heart. Instead he took the heart from another creature and brought it back to Evil Queen Tibalt in a box, saying it belonged to Rose Red.

The ruse fooled Evil Queen Tibalt, for a time. Meanwhile, Rose Red had grown bored of the dusty old castle. She ventured further into the mountains, into the heights where the snow was white as purest flame. The cold never bothered her anyway. And there, protected by a few pines, she found a cottage belonging to Seven Dwarves.

The dwarves were shivering around a cold hearth. The wood inside was frozen. "If we can't light it, we'll freeze," the dwarves said. Rose Red laughed. "No one's freezing with me around. Stand back!" She set the chimney blazing. Stray flames caught the eaves on fire, and the whole cottage might have burned down if not for dwarven efficiency. Their quick work with a snow-bucket brigade impressed Rose Red, and her pyromancy impressed them.

"Mind if I kick it here for a spell?" Rose Red asked. "Yes, and our first toast will be to you," the dwarves replied, serving flagons of cider which they drank hot from her sparks. The princess and dwarves got along well in their boisterous house. Every morning the dwarves sang, "Heigh-ho, heigh-ho, it's off to work we go!"

They returned from their jewel mine with a Ruby Medallion for Rose Red. "It's almost as bright as your fire," one dwarf said. She pinched his cheek and replied, "And so is your blush." They and Rose Red may lived together as well as fire in a furnace, if Evil Queen Tibalt had not learned from his magic mirror that he was still not the fairest in the land.

"Very well," he said, "I will snuff Rose Red myself." And so Evil Queen Tibalt disguised himself as an old crone. He hobbled to the dwarves' cottage and sold Rose Red some new armor. Only the armor constricted her chest until she could no longer breathe.

Rose Red fainted, but she did not die. She revived as soon as the dwarves returned from the mine and freed her of the armor with some Destructive Tampering. "Best be cautious," they said, "and not go outside the cottage." "Burn that!" Rose Raid said.

A few days later while hiking through the mountains alone, Rose Red found bright apples growing on a pine tree. She had never seen such a thing before, and red was her favorite color. She just had to taste one of these fruit jewels. But no sooner had her teeth pierced its crisp and luscious skin then its evil enchantment took hold of her. She fell dead asleep.

Evil Queen Tibalt had laid the trap of poisoned apples, and at last he cackled in front of his magic mirror. He watched the mournful dwarves arrange Rose Red in a coffin made of gold.

Every turn at dawn, the dwarves opened the coffin to pay their respects to Rose Red. Strangely enough, she did not decay. Her cheeks stayed flush, and she was still warm to the touch as if the fire of life burned within her still. And yet nothing the dwarves did could rouse her. The tale of the sleeping princess spread across the land, until one day came a young noble.

Some say this dashing prince was Koth the Hammer, who Planeswalked to save her with a shimmer of golden light. Others, that Flamerush Rider rode in on a horse with a mane of sunset. Or Seasoned Pyromancer came and swore his lifelong devotion to her. A few even whisper that Rose Red was roused by a woman, Jaya Ballard, Task Mage. If the chronology of that pairing makes no sense to you, remember the Multiverse is a mysterious place, and this is a faerie tale.

The only thing that's certain is the young noble did not wake Rose Red with a kiss. The sleeping princess would not have been able to give consent. Rather, the power of their fire woke Rose Red. And she woke up angry.

"Evil Queen Tibalt put me to sleep. Kill him, my dwarven friends!" And with a Kindred Charge, they did just that. Then they, Rose Red, and her fiery true love moved into the castle. It became a rowdy and lively place, where they lived as an extended family happily ever after.

You will find more than one card referencing the magic mirror, as they all had synergy with the Seven Dwarves. Playing multiple instances of the story pieces will allow you to have more flavorful games. Though the primary point of this deck is to tell a faerie tale, you will be able to win games with it. The dwarves can be a real fighting force, and I picked what I believe is the strongest red Planeswalker for Oathbreaker. If you find another flavorful pick for the deck, tell us all about it in a comment.

Before moving to the second deck, I admit I've never seen the card Dwarven Recruiter before, but he does work here, especially if you have Diviner's Lockbox in play. Now, where our first deck was based off the faerie tale, the second one only happens to play some of the same cards. I made it out of excitement for Sundering Stroke, previewed by @JRolfMTG. The Oathbreaker format allows you to build around not only your favorite Planeswalkers but also sorceries and instants that capture your imagination.