I smell the blood of a Planeswalker,

Be they alive, or be they dead,

I'll grind their bones to make my bread." 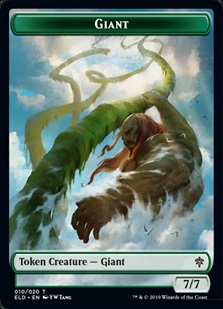 Throne of Eldraine allows us to tell our own faerie tales, and casual multiplayer formats gives us a tasty way to savor the new cards that revolve around food tokens. Whereas Commander focuses on a legendary creature, the new format of Oathbreaker revolves around a Planeswalker and their signature spell. You can cast this instant or sorcery whenever your Planeswalker is in play, and it's taxed two colorless more each time.

This week we'll spread out a fey banquet. Watch out! Oko, Thief of Crowns is up to no good, and if you take his food you might end up under his control. But if you gather enough scrumptious morsels you can command a 7/7 giant as early as turn three, thanks to a signature spell of Giant Opportunity. From there, the story gets exciting.

For your story to have a happy ending begin it with a 7/7. From there you can draw the cards you need with spells like Return of the Wildspeaker. Oko ensorcels Garruk in The Wildered Quest by Kate Elliot, calling him Dog, but more on Oko's character later. In this deck he's here to heap the table full of food and entice giants. His delicacies are to die for, and they may well kill your opponents as 5/5 elks with the help of Muraganda Petroglyphs. (The enchantment with your giants is just gravy.)

Should we untap turn four with a 7/7 giant, whatever should we do? Well, you tell me. With a mana dork in play we can cast Traverse the Outlands for a 7x Rampant Growth. We can tempt Ghalta, Primal Hunger onto the battlefield with the rich smell of bountiful meat. We can even discover The Great Henge for no net cost. And should we ever grow weary of the story, we can end it and our opponents with Rancor on our giants or an Overwhelming Stampede.

A mana accelerator like Gilded Goose will give our stories a lively start. A golden goose is rescued from the cloud castle in the original story of Jack in the Beanstalk, but this time we're siding with the giant. The goose is not loose. It ramps out our Oathbreaker on two turn.

Many of the card choices revolve around food. If anyone tries to topple your giant you can whisk him into the Witch's Oven to get your food back. Yum! Some spells are more whimsical, such as Wolf's Quarry, and if you wish to give the deck more teeth you could replace them with any of the more powerful cards below:

You could also lean into the deck's whimsy and flavor. In addition to being fun, Polymorphist's Jest allows Oko, Thief of Crowns to steal bigger creatures with his ultimate, in addition to being a hilarious combat trick. Serendib Sorcerer fills a similar role in the decklist, and the card acts as a scarecrow, potentially discouraging multiple opponents from attacking you since you can neutralize their creature. For the purposes of theme, let's say the 0/2 they transform into is a really tough fruitcake.

The Questing Beast is decently flavorful and powerful. Vigilance is more important in multiplayer, and the beast will have plenty of Planeswalkers to munch. Speaking of nibbling, the Gingerbread Cabin can be fetched off Misty Rainforest, but if you don't own the expensive land don't worry about it. The artifact lands are also cuttable, Seat of the Synod and Tree of Tales. They merely can be swapped with Oko, Thief of Crowns, but you may be better off with the new Castle Garenbrig and Castle Vantress.

Much of the deck's interaction comes in the form of counterspells. Spell Pierce and Pact of Negation do work in Oathbreaker, a format that revolves around Planeswalkers and their signature spells. Your counters can also save your giants from most threats, yes, even from the adventure half of Giant Killer.

Truth be told, in this story we're playing as the villains. Planeswalker Oko is a trickster of sorts, stealing from plane to plane, shapechanging, pretending to be things he's not, fooling people, exposing their hypocrisy, and often enough, turning them into an elk. On his frolics across the Multiverse he takes many things but never responsibility. If you would prefer to leave it at that, stop reading now. The last few paragraphs will discuss Oko as he appears in The Wildered Quest, with light spoiler and trigger (abuse) warnings. 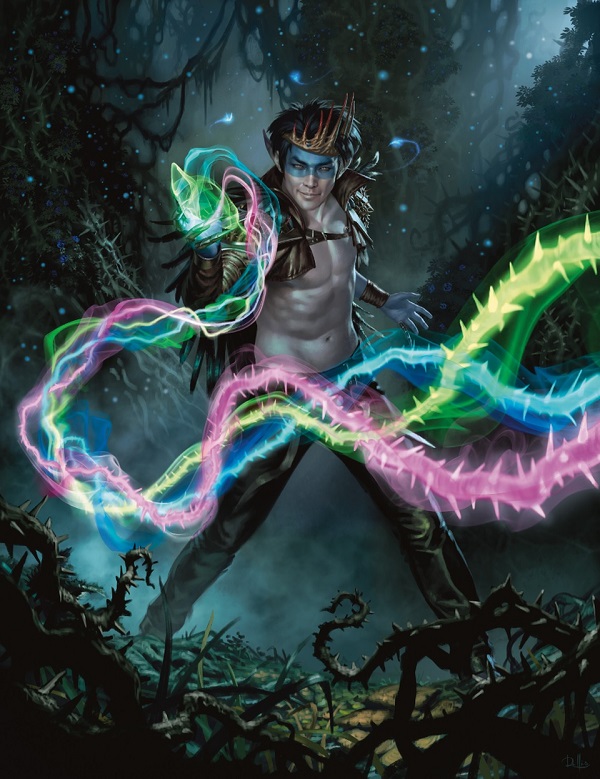 As the antagonist in The Wildered Quest, Oko seeks to undermine societal structures. He says in the past he was tortured by society. It's likely a lie. At the least, I recommend disbelieving abusers who say they were abused in the past. It's one of the ways they shed responsibility for their current behavior; read this book for more detail. Oko doesn't feel the need to justify his actions, but one thing is certain. He's an abuser.

Oko strips Garruk of his volition. He shapechanges other people without their consent, and he laughs it off with a perfect smile. His beguiling appearance itself is a lie. He's a shapechanger. He didn't earn those abs, and even if he did no amount of god bod could equal the number of lives he ruins carelessly. Don't let Oko fool you. He ranks among the Multiverse's worst villains. His antics are all the more unforgivable because we're inclined to forgive them.