Have you heard about the new Oathbreaker format but hesitated to buy in? This week we're lowering the cost of entry with a deck ruled by Vraska, Swarm's Eminence. On CoolStuffInc.com, I added to my cart every card (forty three, not counting seventeen basic lands), and it came out to under thirty dollars. 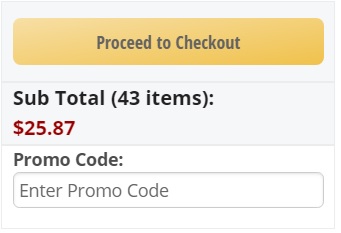 In multiplayer formats like Oathbreaker, the most powerful and expensive cards don't win games. Potent strategy and politics win games. And being underestimated because your lowly cards are Draft chaff is a strong strategy. It's advantageous to be overlooked. Just ask Vraska the Unseen.

Vraska did not grow up on the streets but rather below them. What life she would've carved for herself in Ravnica's undercity we'll never know. Before she had even committed to the Golgari guild, Azorius arrestors profiled her as one, imprisoned her, and would have beat her to death had her spark not ignited.

She returned to Ravnica with a new appreciation for life and death. This time she joined the Swarm as an Ochran Assassin. Over the years she allied herself with the downtrodden kraul, the forgotten Erstwhile, and the all-too-generous Bolas. She wrested control of the Golgari and made herself a throne of the petrified remains of her enemies. She gained her ultimate Assassin's Trophy just before War of the Spark when she killed Isperia, the Azorius guildmaster who had ordered the raid that had imprisoned Vraska so long ago. 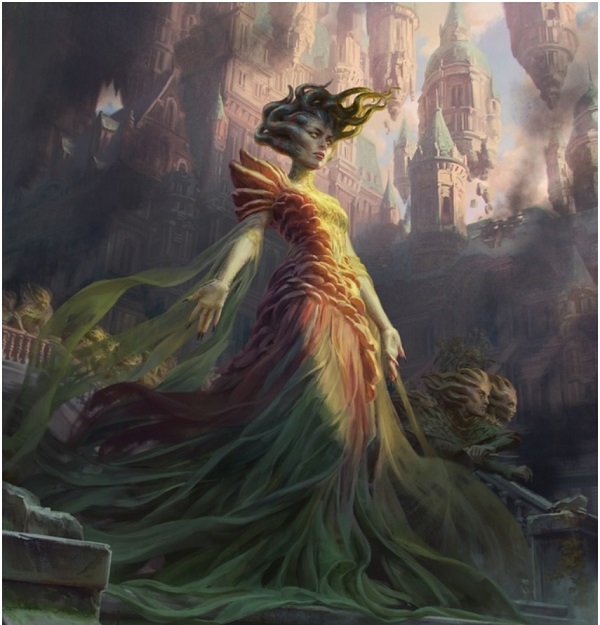 You too can rise from humble beginnings to rule with luminescent elegance and savor the sweetest vengeance. Today's Oathbreaker deck pushes the limits of budget while still having a deadly strategy. In a multiplayer format where everyone starts at a mere twenty life - and where your Oathbreaker Planeswalker must stay in play for you to cast their signature spell from the command zone - Vraska, Swarm's Eminence can assassinate anyone who gets in her way. Not only does she have a very particular set of skills to murder 'Walkers, but giving trample to her deathtouch creatures makes them all but unblockable. Assigning a single point of damage is enough to kill anything, and the rest can go directly to the defender's exposed jugular.

If CoolStuffInc runs out of Pharika, God of Affliction, instead buy Skullwinder. That snake is particularly suited to Swarm aesthetics. I deliberately chose rats and insects for the one-mana deathtouchers in the deck, things that skitter in the darkness. You could substitute in fancier deathtouchers, such as Narnam Renegade, Ruthless Ripper, Vampire of the Dire Moon, and Gnarlwood Dryad. However, the benefit to your overall deck power will be minimal. You may even win more games with the humbler and more on-flavor 1-drops.

Flavorful and fun cards win games in multiplayer that stock and powerful ones can lose. For example, take the signature spell of Overrun. I have a great fondness for this card, having won with it often in the early years of Magic. At the casual table I could share a story, and my happiness at slinging cards I enjoy will improve the gaming experience. Contrast this to instead playing with Triumph of the Hordes face-up. Not only is this card more expensive, but it is more likely to poison players against you politically, especially those who died to it one time too many in Commander. Not only that, but Overrun is the stronger card in Oathbreaker, requiring fewer smaller creatures to stomp your foes and flatten their Planeswalkers.

I considered Overwhelming Stampede for the signature spell. It would be easier to cast in a budget mana-base, but I believe Overrun will help you win more games when you're behind. If you only have a few 1/1's and 2/2's on the table, Overwhelming Stampede will feel much worse. It is true that Vraska, Swarm's Eminence can grow your creatures to 4/4 and bigger, but if those stay in play you're likely winning anyway.

What I adore about our gorgon queen is that her passive ability activates even when attacking Planeswalkers. In Oathbreaker, you often have to attack them first to deny opponents from casting their signature spells. This can lead to feel-bad moments when cards like Oakhame Adversary must attack a 'Walker, and you're denied the draw. For that reason, I did not include Hunter's Prowess or Driven // Despair. Hapatra, Vizier of Poisons also has this problem, but like Oakhame Adversary, I felt she was too powerful to exclude.

This budget deck has both powerful cards and strategy. In multiplayer, killing an opposing creature with a removal spell is less useful than encouraging that creature to attack another opponent. "Scarecrow" cards, such as cheap creatures with deathtouch, discourage more expensive creatures from attacking you. No one is swinging their Primeval Titan into your Sedge Scorpion if they have other options. And it's unclear how useful it is to try to overthrow Vraska, Swarm's Eminence. She doesn't have plus abilities, and killing her will allow you to replay her and make more assassin tokens. 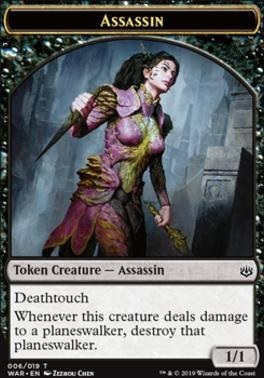 This deck takes scare tactics to the next level with its equipment. Give your Typhoid Rats a Sorcerer's Wand, and you can murder any creature that thinks of attacking you. An assassin token with a Viridian Longbow can snipe down any Planeswalker. This will put you in a strong position politically, where other players stand to lose everything if they make you their enemy.

Twenty dollars for a deck is a low cost, considering how many games you could win in Oathbreaker, as well as how much fun you could have with its Golgari flavor as rich and pungent as the fungi in Vraska's dress. The diseased and the outcast can find new community in the Swarm, and from the shadows their deadly claws can strike out at the rich and powerful.

Adding more expensive cards to the deck may make you a more obvious threat at the table, and you may not win more games. However, if you wish your deck to glitter with undercity treasures, I've included a non-budget list below. 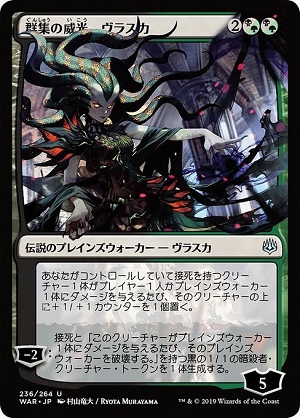