This past week, I was able to gather five friends and draft the Cube for the first time since my monstrous Born of the Gods update. I always look forward to the first Draft after an update; itâs like a prerelease. I am able to see if any of the new cards make an impact and whether the changes I attempted to seed sprouted into things that actually matter. The event itself was interesting. We drafted, and we then randomly selected teams afterward. I ended up on a team with two players who put a priority on blue cards. They both ended up with quite a bit of card-draw in their Grixis and Simic decks. My Island-bound teammatesâGrixis Steve and Simic Sethâwent 3â0. Your fearless designer went a paltry 1â2 attempting to draft Rakdos aggro. It turned out the person three seats away was trying to draft Rakdos control, and we ended up with two decks between us, but half of my chocolate was in his peanut butter. Rich, the other Rakdos player, ended up with the dreaded 0â3. The other beatdown pilotâZachâtook Boros to a 1â2 record while their third teammateâMicahâpiloted Bant to the same result. The decks with the most card advantage went undefeated while the aggressive decks had two total wins compared to seven losses. While this is a small sample size, it is something to note, and it relates to a concern I have had for quite a while: Is the removal in my Cube too strong?

In the aftermath, I was talking with Steve about why the Draft played out the way it did. (As a side note, I find having a debrief with the drafters to be an incredibly valuable tool, as it can provide the much-needed outsiderâs perspective. Tunnel vision is a real thing, and this can help combat singular viewpoints.) Steve is an accomplished Magic player, having won Grand Prix Columbus in 2007, and he has worked in game design. To put it another way, whenever I tell our fearless editor that Iâm going to draft with Steve, I can almost feel the jealousy drip through the message window; Steveâs insights are priceless.

I was explaining to Steve an idea I had of comparing the contents of my Cube to that of some of the âgreat Draft formats.â The two I picked were triple Innistrad and triple Rise of the Eldrazi, and with the help of my friend (and Common Cause cohost) Mike, we crunched the numbers on the removal in my Cube and in these sets. The goal was to see how my Cube stacked up against these sets, considered to be all-time greats.

In this statistical exercise, removal included anything that removed a creature from the battlefield either permanently or for multiple turns. Cards such as Pacifism, Fireslinger, Oust, or Ambush Viper were counted, but a tapper or a bounce spell would not. I averaged the number of removal spells across both common and uncommon and then tried to determine the asfan of removal in those sets.

What is asfan? This concept is used by Magic R&D to determine how often a theme or concept will show up as a booster pack is fanned out. In Innistrad, double-faced cards had an asfan of one since they showed up in a special slot; this was also true of the land slot in Dragonâs Maze (which was dedicated to either a Gate or to a shock land).

The asfan for removal in triple Innistrad was about 1.7. Rise of the Eldrazi Draft provided 1.95 removal cards per pack. My Cube, in its current state, provides 2.78 removal cards per pack. Thatâs an additional kill spell per pack over what has widely been praised as the best Draft format of all time. It means that, on average, each deck in a Draft can end up with somewhere between six and eleven removal spells.

When I quoted these numbers to Steve, a light switch flipped in his brain. We started talking and came to the following conclusions:

Part of me wishes I had done this math before my massive update. It is very hard for me not to go diving into the Cube to attempt these fixes right now! Journey into Nyx, and the ensuing update, is so far away!

In order to better understand these revelations in context, I decided to dig deeper into the numbers. As mentioned, Mike and I did the math on my Cube, Rise of the Eldrazi, and Innistrad. That was only part of the truth, as we also applied the same metrics to Adamâs Pauper Cube and Avacyn Restored. What I found provided at least one Oracleâs worth of insight into not only what made AVR my most-hated Limited format but also how the differences between my Cube and Adamâs influences their composition and design. 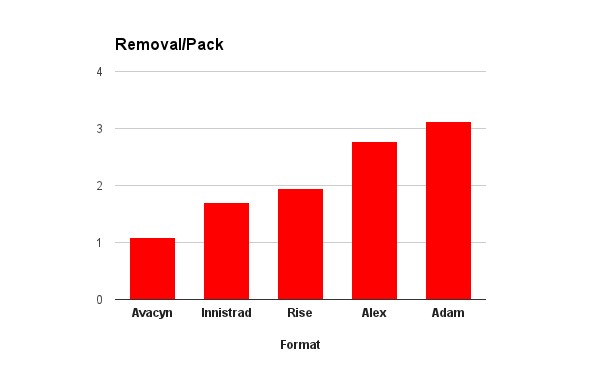 Avacyn Restored had, on average, one removal spell per pack (an asfan of one), and thatâs being generous with cards such as Guise of Fire. Adamâs Cube surpasses mine with a removal asfan of over three cards. If my Cube kills things, Adamâs kills them then sets them on fire.

One of the admitted problems with Avacyn Restored Limited was the quality and quantity of removal. In the angelic format, creatures tended to stick around, which made coming from behind a challenge. I am happy my Cube occupies the other end of the spectrum, where comebacks are enabled thanks to cost-effective card-draw and reasonable removal. No matter how much I tweak it, I doubt my removal levels will ever match those of Avacyn Restored.

And the drafters rejoiced.

Adamâs Cube, on the other hand, has nearly three times as much removal as that bemoaned Draft environment. Our fearless leader is able to support aggressive decks in his Cube without having a reduced kill count. The answer resides in the creatures. Where I cut the shadow creatures from my environment due to the fact that they were not interactive elements, Adam not only has included them, but he also runs creatures with horsemanship. Thatâs quite a bit of evasion. These beaters are nigh-impossible to block and create an ecosystem that can reward drafting them highly because if they go unanswered, they win the game. In order to give slower decks a fighting chance against these undercosted sidesteppers, this Cube has to include more removal.

Boiling it down, the reason my Cube played as if it had too much removal is that I placed a higher value on creatures that could interact.

Returning to my last update, I cut Surrakar Marauder. Although it is a fine creature that operated on curve, I felt that I could remove it without damaging gameplay. However, the fact is that Surrakar Marauder is exactly the kind of card I should be including if I want to give aggressive decks a fighting chance. While I do not want to go as far as Adam and include creatures that are nearly unblockable, having more monsters that are cheap and evasive can do wonders for improving the game for those who like to beat down.

The other direction I can take is to ramp down the removal. As it stands, an average pack in my Cube will contain two or three removal spells while the consensus âbestâ Limited environments from Magicâs history approached two kill cards. If I seek to emulate these formats, I may have to cut a decent portion of my removal. From there, the consequences snowball, as I would potentially have to remove some of the more potent card-advantage spells to balance this out. In turn, this could lead to packing weaker creatures overall. This is a proverbial hurricane caused by a butterfly.

Of course, there is another route I can take. I can swap the major and minor roles of Rakdos in the Cube, giving the destroy-all-monsters deck priority over the beatdown strategy. I would not cut the aggressive cards from these colors, as to give drafters the option to build a solid attacking deck, but instead, Iâd shift the primary archetype to aggro.

This all comes from one data point, one singular Draft. The packs could be skewed, and the cards could have been there. I could be overreacting, and since I am not making any changes until May with Journey into Nyx, I will be able to gather far more data to influence the additions and subtractions I will make at that time. The information I researched and this one Draft tells me I might need to whittle down the removal, but the only way to find out is with more Drafts.

I love this style of research.

Asfan is an important tool in understanding how your Cube can play out. It provides information as to what players are seeing above and beyond what theyâre playing, and this can go a long way toward informing Draft picks. When looking at issues that arise in your Cubes, taking asfan into account is a vital aspect in helping to understand if the perceived problem is real or just an illusion. I had already started to research this before my Draft, but I was gifted a dream scenario to prompt discussion. Let me know other sort of asfan data would you like to see in the future. What information would you like to see extracted from my Cube or from Adamâs? What about your favorite set? Because if I had this much fun doing math in school, well, I might have stuck with it a little longer.

Check out Common Cause on iTunes!