There was a time before the Cloud when Storm reigned over Pauper. The combination of cheap Dark Ritualâstyle cards, cheap card-draw, and the Invasion sac lands in the vein of Sulfur Vent made assembling a lethal Grapeshot or Empty the Warrens almost criminally easy.

That was years ago. Empty the Warrens and Grapeshot were banned, but the Storm legacy lingers long. Temporal Fissure was removed from the format, and the final spout from Scourge was gone. Cloud of Faeries mimicked Storm in its ability to produce mana and found itself on the cutting-room floor. The easiest way to get the axe in Pauper is to cheat on mana. Of course, this is not unique to the world of commons, and rituals get the axe in formats large and slightly less large.

So when I saw todayâs preview card, I was wistful for what could have been. 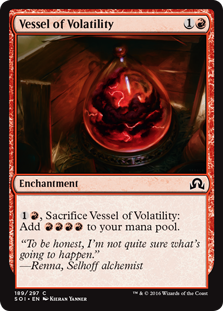 In another world, Vessel of Volatility would be an important tool in powering up a combo turn. Using it in one turn can turn

and breaks even on cost. Splitting the enchantment across two turns allows you to jump from 3 mana to 5 for a single turn. There is power in the Vesselâit just has to be channeled correctly.

Letâs examine some similar cards. Pentad Prism is among the first cards that came to my mind. Another permanent that can break even on mana, the Prism sees play as a way to invest mana for future use in some combo decks. While Pauper currently lacks a combo deck that can take advantage of a mana burst, maybe the format can take advantage of the one-time burst. Combined with Generator Servant, a copy of Vessel of Volatility could do some heavy lifting in powering out huge threats. Scuzzback Marauders, Ulamog's Crusher, and Twisted Abomination could all benefit from the mana boost provided by the Vessel. Cheating these creatures into play for their mana costs may not be the most efficient use of the enchantment, but it is certainly interesting.

Font of Return is a card that sees regular play in the sideboards of creature-heavy black decks. The enchantment comes down early and provides a burst of card advantage after blows have been traded. Can Vessel of Volatility do something in a similar vein? With Tron decks on the rise, Vessel of Volatility can make it easier to cast a Molten Rain and Goblin Freerunner in the same turn, helping to shore up a deficiency in the land-destruction strategy. These decks have suffered for their inability to apply pressure while neutralizing a mana base. Vessel of Volatility can come down as early as turn two and help overcome this barrier. Spending a turn on blowing up some terra firma is less of a cost if it comes with the opportunity to also land a creature.

This deck is a fairly straightforward execution of a land-destruction strategy. It wants to stunt opposing development while being able to attack unabated. In a metagame dominated by Tron, the above list may have a chance. Given quicker metagames, copies of Rite of Flame (still legal and totally awesome) may be needed. For these fields, it might be worth it to look at Hotheaded Giant as a potential 4/4 hasty monster.

The previous words presuppose that all we can do with Vessel of Volatility is that which already exists. Any Magic player knows that such a belief is dangerously false. The game constantly evolves with new releases, and Shadows over Innistrad is sure to provide new puzzles to solve. Given what we already know about the set and Magic, we can try to piece these clues together.

First, Vessel of Volatility has all the earmarks of a card in a cycle. It is a common that plays into one of the setâs major themesâthe graveyardâand provides a relatively cheap way to put an enchantment into the graveyard for delirium. The astute player does not have to plumb the depths of history to find a similar cycle. The Fonts from Journey into Nyx played into that setâs enchantment-heavy world. The Fonts provided in-color effectsâwhite gained life, blue drew cards, black (the aforementioned Font of Return) retrieved creatures from the graveyard, red provided the ability to assault a life total, and green acted as a slow Rampant Growth. Going further back into the world of Nemesis, we see the cycle of Seals, which provided standard effects for their colors (at the time). Way back in the day, white cast Disenchant, blue Unsummon, the black seal as a Dark Banishing, red had Shock, and green a Giant Growth.

Looking at the evolution from Seals to Fonts, we see the addition of a mana cost to the sacrifice, and this appears to be carried through to the Vessels. The Fonts also have abilities that are much more in line with the modern-day design of common. They are all compliant with New World Order in that they do not significantly add to onboard complexity. Compare Font of Fertility to Seal of Strength. The former is very straightforward and has a simple implication and no ability to influence combat. Seal of Strength, however, turns every block into an agonizing decision. It is possible that the Vessels will be closer to the Seals, but given the other complexity points being eaten up by other attributes of the setâdouble-faced cards and madnessâI am inclined to believe that we are going to see some other simple executions.

So letâs speculate just a bit.

White may break the mold immediately and create Spirit tokens. A major theme of the color in our first visit to Innistrad, the ability to create a small air force is not a color-pie bend, and it fits into the slot of small flyers white so often seems to have. It would not shock me to see the white Vessel exile an enchantment to help take care of pesky things on the other side of the board without turning on delirium.

While blue may have already had a card-draw version in Font of Fortunes, the Island-powered Vessel may take on the role of cheap library manipulation. Now that scry is evergreen, it is possible to give this enchantment the ability to filter the top of the library before drawing a card (or two). Maybe it puts some Clue tokens onto the battlefield to play into another one of the main themes.

The black Vessel has the world at its fingertips. Literallyâjust look at Soul of Innistradâthe world is actually black. Anyway, the black Vessel is likely to avoid discard due to delirum and instead may focus on self-mill. It could also be a one-shot small version of Soul Feast or may be a reskin of Font of Return. If it is this final option, it would not be beyond the realm of possibility for the ârandomâ Raise Dead effect to return a la Ghoulraiser or Woodland Sleuth.

Finally, we come to green. Green may go fetch a land again or it could buff a creature, bucking the prohibition on board complexity and adding counters. Green may go Planeshift on us and decide to give Seal of Primordium another go, but it suffers from the same issue of running counter to delirium. If I were a betting man, I would say greenâs Vessel is sure to help win combat.

Every preview season is about solving a mystery. Vessel of Volatility provides us with some interesting hints as to what may come. Red is going to want to build toward a huge turn, and now the next step is figuring out how to take advantage of the mana. There may not be a storm combing, but thereâs always Rolling Thunder in the distance. Weâll have to see what else Shadows over Innistrad offers Pauper before we will know if we need to find shelter.