Thanks to Anthony Alongiâs animals, the multiplayer world has plenty of terms for evaluating cards, but it has few terms for evaluating decks. Since I write so often about deck-building, for which you canât say, âEight rattlesnakes plus four gorillas plus five planktons,â and make a deck, I worked on the problem last June and wrote about it the one time to positive response. This is my streamlined, refined version of the Decktagonâa visualization of what your deckâs good at, aided by headings from Orbitalâs self-titled Brown Album for reasons known only to myselfâ.â.â.âat most.

Planet of the Shapes

The first non-intro thing is to produce the picture. Here it is: 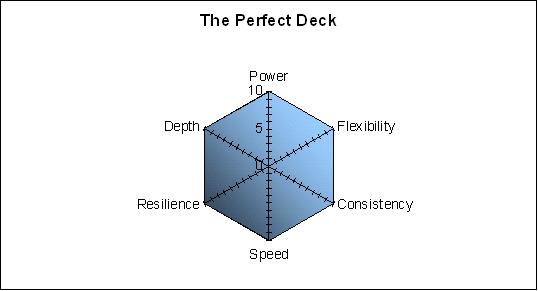 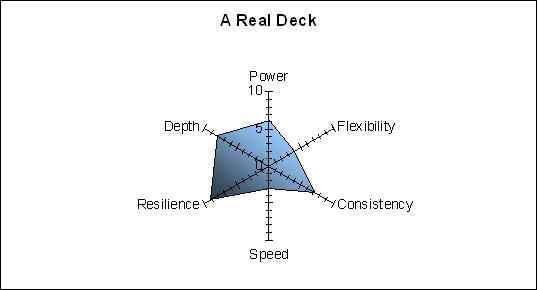 Since decks have a fixed number of cards, no deck can do everything optimally; instead, you make tradeoffs in deck-building based on what you have in your collection, whatâs in your colors, your groupâs metagame, personal preference, and so on. The shape of a deck will be lopsided in some way or another, but thatâs fine.

In order to understand the axes, you have to define Plan Aâthe primary win conditionâfor your deck. A burn deckâs Plan A is sending burn spells to the face. A reanimator deckâs Plan A is its biggest creatures. In Legacy, a Hive Mind deckâs Plan A is casting a Pact of Something-or-other with Hive Mind on the board. Plan A can range from simple to Rube Goldberg, but itâs whatever youâre building the deck to do.

The six axes of the Decktagon gain their context from Plan Aâwhatever that may beâlike so:

I listed them in this order rather than going around the chart because these six axes are in fundamental tension with their opposites. Normally, you have to pay good mana for power; this takes away from speed. Memory Jar and Megrim was so fast for its power that it received an emergency banningâread more here if you like. Similarly, consistency of Plan A is at definitional odds with having a Plan B. Flexibility and resilience arenât as opposed as the others, but theyâre about offense and defense, and since these usually show up as support spells, thereâs only so much room for either. A deck good at one normally will have difficulty being good at the other, so theyâre considered opposites.

The Decktagonâs best use is to figure out why your deckâs misfiring so you can determine how to fix it. Painting in broad strokes, here are some diagnostic tips.

Power problems are the easiest to spot. If Plan A involves Giant Warthog while your opponentâs involves Inferno Titan, in the abstract, you have a power problem. That can be compensated for on other axes, but the easiest fix is to find a better 6-drop.

Speed problems invoke the classic, âI would have gotten you next turn.â If that keeps happening to your deck, you could add ramp or lower your curve for starters. (If youâre building around specific irreplaceable creatures, youâll probably need the mana acceleration). Remember: If that awesome card in your hand stays in your hand, it might as well be a tips and tricks card for all the good it does you.

Sometimes, convoluted decks run into speed problems when they need a specific sequence of events to occur. The individual pieces might be cheap, but the plan doesnât come together because the mana isnât meshing or because Plan A doesnât receive enough fuel from the other cards. If Creeping Renaissance is your trump card, it needs to be the trump card for things that have gone to the graveyard; it wonât do anything if your permanents are good at staying on the board. Your plan might be solid, but itâs too slow because youâre waiting for too much to happen. Equipment and spare mana issues run the same way. This is different than a consistency issue in that your deck might lack the capacity to run at the desired speed ever.

But while weâre on the subject, consistency issues are easy to spot, but it normally takes a few games to get a handle on which way to fix them. All-in decks tend to have power and speed but lack consistency. Iâve been fiddling with Grand Architect to see if thereâs a deck with itâother than with Heartless Summoningâin Standard, and consistency is the trademark issue with Architect decks. Plan A (use Architect and other blue creatures to ramp into awesome artifacts) has both power and speed, but unless all the pieces come to the party, thereâs no party. I miss Augury Owl; scry 3 was vital for finding whatever I didnât have at the time, be it an Island, an Architect, or an awesome artifact. As Ponder is not a blue creature, it is no Augury Owl for this deckâs purposes, leaving my dreams of a fourth-turn Myr Battlesphere too often in the pipe from whence they came.

If your deckâs a glass cannon (and Grand Architect runs into that, too), you can add Plan B (depth) or try to preserve Plan A (resilience). As with flexibility, what you need depends heavily on your metagame. A creature curve is basic depth, but resilience can help if Day of Judgment feels like the rule rather than the exception when you play. Undying has added a lot here.

Here are some past all-stars in combining traits. While the paradigmâs meant for decks, certain cards give good examples of these axes, so here they are.

PowerâSpeed â Doran, the Siege Tower. Itâs Plan A for Doran Zoo and conveniently can come down on turn two. Also, Treefolk are cool, though the Decktagon sadly cannot measure that.

PowerâConsistency â Magic 2012âs Rune-Scarred Demon and Sphinx of Uthuun might fit here. They go at the top of a curve while making everything smoother the rest of the way.

PowerâDepth â There are few good cards here, but Wurmcoil Engine fits the bill. In the Engineâs case, the depth is also resilience, since they both come off the same death trigger.

PowerâFlexibility â Jace, the Mind Sculptor is the most obvious example. The ultimate says, âI win,â and having three other serviceable abilities means Jace can help with whatever you need. The Brainstorm ability added consistency as well. Constructed rarely sees this combination, which is why it took a while for people to see the ban-writing on the wall. It wasnât ban-worthy on the traditional axes of powerâspeed, but it was ridiculous all the same.

PowerâResilience â Wurmcoil Engine here, too, as discussed. If you can stand out on three axes, you get played without question.

SpeedâConsistency â Magma Jet is a burn spell with scry. For burn decks, that defines these axes. The Scars of Mirrodin dual lands go here for most decks theyâre in.

SpeedâDepth â The best cards in this line also add something else. Dark Confidant normally is part of fast plansâadding consistency to the speedâbut a 2/1 is okay depth, too.

SpeedâFlexibility â Snapcaster Mage is speed and depth in the same way as Dark Confidant, but rather than the consistency of drawing extra cards, Snapcaster adds the flexibility of flashback.

SpeedâResilience â Viridian Emissary trades with a creature and ramps you in the process. Thatâs about as good as youâll get here. I realize Iâve been naming a lot of expensive powerhouses rather than cards to help casual decks, but power and speed are the biggest deals to tournament players, so it canât be helped.

ConsistencyâDepth â Fan favorite Krosan Tusker. Early cycling finds you a land and a card, while a 6/5 in the late gameâs never bad.

ConsistencyâFlexibility â Puresteel Paladin gives consistency all the time, and it gives flexibility when you have metalcraft. Akroma's Vengeance goes here, tooâhitting three types of permanents lets it hit opposing game plans from several anglesâ.â.â.âand the cyclingâs a nice option.

ConsistencyâResilience â Solemn Simulacrum is the poster robot here. It can add to consistency coming and going, and its normal use in combat is as line of defense.

DepthâFlexibility â Acidic Slime. Creeping Mold was already flexible, but adding a 2/2 deathtouch gives you even more flexibility while occasionally getting in for damage. Really, any creature that takes down a permanent when it enters the battlefield can go hereâfrom Nekrataal to Kor Sanctifiers.

DepthâResilience â Loxodon Hierarch offers a 4/4 body and two forms of resilience: life-gain and mass regeneration. Green normally scores well on depth because most of its plans involve creatures. If youâre like me and stick the Hierarch in a deck with Verdant Succession, youâre taking the Extreme DepthâResilience Challenge.

FlexibilityâResilience â Like powerâspeed and consistencyâdepth, these are opposing axes and therefore have few cards on them. If there were an undying Clone, that would rule this category. As it is, Mimic Vat does a passable impersonation.

At least in some time zones, youâll catch my article next Monday. (Yes, that was weak; Iâm running out of song titles.) Until then, may you find the cards that, in context of your deck, fulfill multiple roles with aplomb. Almost any card is good in the right context; itâs finding that context that can bring the most fun as a deck-builder and player.

Feel free to ask for clarification or whatever in the comments, though youâll probably get clarification before you get whatever from me. (Terms and conditions may vary. Void where prohibited. And by âVoidâ I mean the card Void.)