There is a myriad of Magic variants. Commander and Planechase are just two of the variants often seen in multiplayer Magic, a variant of the original two-player game. Variants are there to throw some spice into the mix. My group regularly plays Free-For-All multiplayer games in which each person can attack anyone else. This seems to be the standard way to play multiplayer, as just about every casual group plays this way. While different groups do different things in relation to the attack phase (some allow you to attack only one player, while other groups allow you to spread the wealth across several players in the same attack phase if you so choose), it is essentially the same game. As a changeup for your group, I recommend trying Attack Right.

Attack Right is the same as Free-for-All except that you can only attack the person on your right. At first glance, this seems to be a pretty minor change that really wouldnât offer much spice to your games since so little changes, but as youâll see, there are some significant changes produced by this small rules change.

Before we get too far in, Iâve been calling it Attack Right, but you can just as easily go with Attack Left. I recommend Attack Right, and I have a practical reason for this. Consider the diagrams below. 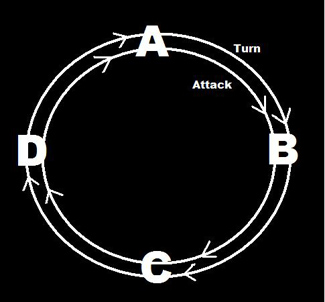 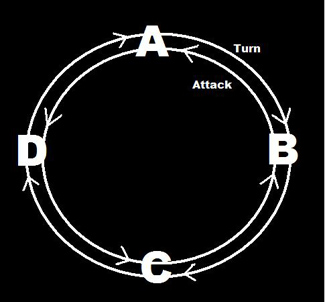 First, look at Attack Left. Once Player A has finished his turn, Player B starts her turn. Player B untaps, draws her card, and considers her board position, then the rest of the table, and then her cards and what she can and canât do. She chooses what she believes is her best plan of action and completes her turn.

Now look at Attack Right. Once Player A finishes his turn, Player B starts her turn. Player B untaps and draws her card. She doesnât have to consider her board position because that hasnât changed since Player C attacked her ages ago. She has had the entire turn to consider her board position. She simply has to look at how the table has changed with Player Aâs turn before deciding. With fewer changes happening right before Player Bâs turn, Player B can play faster and keep the game moving.

When you can attack only the person on your right, how does your strategy change?

You canât rely on your creatures to do the heavy lifting â In Free-For-All, if you donât have a way to deal with someoneâs enchantment, you attack him. It makes it clear that he should get rid of the enchantment or your only recourse will be to get rid of him. If someone shows signs of playing a combo deck and you donât have the cards to stop the combo, you attack him and hope you can kill him before he combos off. If someone is attacking you with an unblockable creature, you attack him back and try to kill him off. The ability to send your troops wherever they are needed (and knowing that others can do the same) gives you some freedom in deck-building. Weaknesses or flaws in your deck can be covered by other players attacking or by your own attacking.

This doesnât work in Attack Right. You need to consider your alternatives in Attack Right when one or more of the above scenarios begins to happen.

Watch the entire board â This isnât a change in strategy as much as it is a warning not to abandon everything you learned in Free-For-Alls. The fact that you canât attack someone or do not have to worry about being attacked by someone doesnât mean you can ignore him. If someone is playing a deck with Elesh Norn, Grand Cenobite or Massacre Wurm, you need to act accordingly. Ignoring the other side of the table is bad strategy.

Are you sure you want to attack? â This is something of a subset of watching the entire board. Too many players see Attack Right as the format in which you pin your ears back and just start attackingâbring everything you can as fast as you can in the hopes of killing off the player you are attacking so you can start in on the next guy.

While this isnât a Free-For-All, it is still multiplayer; the best way to get card advantage is to have other people work for you! You may not be able to convince others to attack the player on your right for you, but if the Threat on the table is two players to the right of you (and you saw that because you were following the above point, good job!), perhaps it is in your best interest to stop attacking altogetherâ.â.â.âand make it clear that you have no intention of attacking.

As the player to the left, you have significant sway over how aggressively the player on your right is. If you know that I will not attack you the next turn, irrelevant of how open you are, you are free to attack with every creature you have, as opposed to keeping some or all of them back to play defense.

Where you sit â I talked about this a bit last week, but I never really got into the strategy. Consider the scenario for the aggro player on your left who is looking to attack you. The theory for many aggro players in an Attack Right format is that with only one player able to attack him, it is the right time to use a deck that just opens up against a single opponent. Your opponent is not likely to be able to handle the full brunt of the attack, and he will kill him off long before another opponent kills him.

The problem with this strategy is when you take it to the next logical step: What happens when he has to take out the next opponent? After killing off the last opponent in record time, he now has another opponent, who is probably still at a full life total, and you are down to almost 10. Can he get through him before he is dead? Assuming he manages that, what about the next opponent? Simply put, unless his decks have ways to stop an opponent from killing him that doesnât involve killing him first with creatures, Attack Right is no place for a pure aggro deck. You need to be able to set up a solid defense if you hope to win in this type of game, and aggro decks tend to forego that defense for a blistering offense.

But getting back on topic, the aggro player sitting on your left with his flawed logic isnât really going to care when you read him this logical argumentâhe is simply going to bash your head, and there is very little you are going to be able to do about it. You built your deck to handle defense, offense, and a few tricks in between. That player is going to run over your defense, and youâll be watching as the player on his right slowly takes the aggro player out of the game. In a Free-For-All, you can try to duck your head, not make eye contact, and just hope that lunatic doesnât attack you first. In Attack Right, you need to make sure you are sitting in the right place before the game even starts.

Conversely, you want to be sitting on the right of the control player. This is the guy who normally builds a wall and sits there, waiting for everyone else to do his dirty work for him. This guy is almost never going to attack you. Rather, he is going to help you make it all the way around the board. You will be able to make full-out attacks against each opponent on your left, while the control player prevents all threats to you on the right. He will probably even mess with your combat to help you along!

The key is to be ready when he turns on youâhe is going to turn on you. You donât really think the control player is going to let you kill everyone all the way around the table and then come at him with a full army of creatures, do you? It is probably going to be a battle between you and him in the end since he isnât spending any resources attacking, and you are spending no resources defending. This leaves everyone else vulnerable to the two of you, who for all intents and purposes, are working as a team. Before the last remaining player is eliminated, you need to have your plan worked out to deal with the control player since you can expect him to come after you, probably just before you finish off that third player.

If your group is okay with it, Attack Right is definitely a format in which combos can shine. You canât be gang-tackled by the entire board, so you get a little more time to make everything come together just the way you want it to.

If insta-win combos are frowned on in your group as they are in mine, consider what has power in this format:

So, what do I like for this format? How about something a little different?

This pairing is tough to pull off effectively in a Free-For-All. It requires you to use most of your green mana on your turn, leaving you vulnerable to many opponents coming after you once they see you attack for 13 trample damage with fairly little effort. In Attack Right, he blasts in, and everyone sees an effective combo that they know isnât coming at them.

The obvious problem is that this is the very definition of the aggro player whom I was complaining about earlier. What about the defense? How about this for defense?

While none of these creatures is particularly spectacular, there is a good chance you will not be attacking with them while the Auratog is available. There is a wall, a creature with protection, another with reach, and one with flying. The Giltspire Avenger even provides you with a way to destroy the troublesome creatures that are attacking you. The problem is that they only die after they have dealt damage to you. If only there was a way to gain life to recover the life lostâ.â.â.

Noble Hierarch can help with the mana in this green-hungry, three-colored monstrosity, and Qasali Pridemage can deal with the annoying enchantments and artifacts your Auratog needs solved. Perhaps a copy of the Sovereigns of Lost Alara can help find a Rancor when one isnât already in hand.

And it appears that all of these cards happen to have exalted! How handy that they can all stay back and play defense while helping the Auratog run everyone else over! As long as everyone else is coming to play, we should probably just add in Rafiq of the Many as well!

With just Rafiq and the Auratog and two green sources of mana, you can play and sacrifice Rancor to the Auratog, then play it out again, making the Auratog a 6/5 trampling double striker. One more green mana makes him an 8/7. Isnât it great that Rancor and exalted are back in Magic 2013?

So, if you find your games are starting to drag or your group is swelling in size, give Attack Right a shot. It may prove to be just what your group needs to keep your Magic nights rolling.