Editor's Note: Hey all! Wanted to provide a content warning for this article as it is a parody of oversexualized fanfiction and as such contains some language that can be construed as sexually-charged. Given the absurdity of the context, we hope the joke comes through, but we'd like to provide fair warning if you find that kind of content objectionable.

When the blizzard finally broke long enough for me to see the great gray of unforgiving Kaldheim again, I gave myself haste. Without the means to survive the night this was my last push for one more mortal procurement; if I spent the last hour of what passes for day around here concentrating on my potential lack of will or my failures of preparedness, I would assuredly join the bent over blue bodies I stepped over countless times on the way here. Stepping in the soft, slippery crunch, I bit my blue lips for what felt like lifetimes across the worst of a bad situation.

But I will not die here.

The glow of the torches on the porch was so faint, so impotent, that I almost bludgeoned myself against an outermost wall. Even in my disoriented state, I could feel the warmth of salvation on the other side.

Though still! Little did I know this was no ordinary Kaldheim refill stop. I would not merely taste ale and bail - no no; I was in store for much more!

The heat of the meat, the spices so sweet - inside was the unmistakable rumble of good conversation.

No sooner had I removed a big sexy wet boot than-

His glare declared naughtiness and attacked me once - no, twice! - a double strike of hypermasculine, self-assured bluntness. The dirty creature! My heart gained haste and my legs weakened. But I might also have hypothermia. Like seriously, it was really cold out there.

Not seconds before I had removed my hat and placed myself near the anticipated eye line of the barkeep, he was upon me. Next to me. Boasting like a pig. 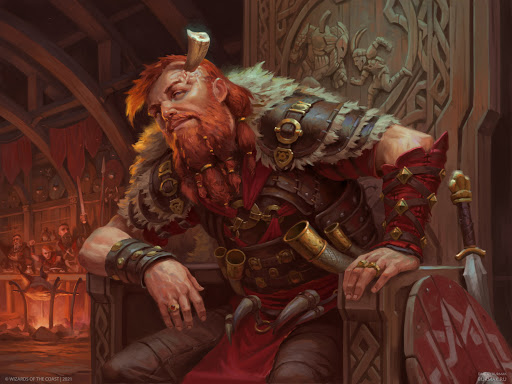 He was shorter than most of my other lovers, but not by that many feet. It's hard to see in the dark when you've been drinking.

The one they call Arni Brokenbrow, beside me, spoke first, with power, with a lust for blood and flesh alike.

Never one to turn down a supposed murderer, my intrigue became tramply and engorged.

Arni propped his arm up on the bar, convinced the short biography he provided me with were the magic words that would get me to remove my pounds of clothing, my survivalist garb, and ragged Kaldheim fabrics that until just days before had been a host of gullible but nevertheless still breathing woodland frolickers.

Then, looking deep into his fiery beardface, the perfect response ambushed me. Clearing my snow white throat, I stated plainly...

"What do you mean you won?" I asked. "You have a horn in your head. You probably have brain damage. How is headbutting for its own sake a game? What are the rules? Did you and the troll both play by the same rules or did you just not think about what the hell you were talking about when you made the implicit connection between a violent act of cranial irresponsibility and a sporting contest between two sentient, consenting competitors?"

I continued in spite of his silence.

"And while we're on the subject, doesn't your name imply that the troll won? It broke your brow, right? It seems you have a piece of the troll's anatomy stuck in your face. Does the troll have a piece of you stuck to its face? Because if it doesn't, I don't see how you won."

He told me he wanted a piece of me stuck to his face.

Unannounced, we began to mouthwrestle.

The Power and the Passion of Anri Brokenbrow | Commander | Danny West

The Commander games we had that night were unforgettable. His deck was beautiful, full of stories of faraway places, priceless and violent machinery, as well as a burning philosophy of untamed power and no plan for tomorrow. It is the Kaldheim way.

I share a relationship with this card you wouldn't understand if I told you. We know one another. We are two souls headbutting the troll of our difficult lives together. And we won.

The Great Arnold the Brokenbrow will forever be with me, and yet, in another way - in a distant, star in the distant sky kind of way - I still haven't looked over most of Kaldheim because the cards are too wordy.