There are some forces of nature that can't be contained even by strict quarantine measures, and one of those forces is preview season. Being at home all the time has given me ample opportunity to fully immerse myself in previews and, I have to say, I'm pretty excited. Having the Commander decks previewed at the same time as a set is really intense and it's kind of stressful but I have the time to fully digest all of the information in the set, which helps. Ikoria and Commander 2020 are both dynamite sets full of fantastic new cards. They're WEIRD, but they're good. Somewhere amidst the lightning otters, space hippos, and a literal sharknado, one crazy card stuck out above all the rest. It may be the most Jason Alt creature ever devised and I knew I had to brew a deck immediately. 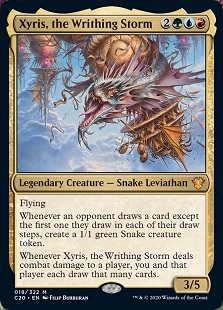 I am actually NOT sick of snakes on my plane because snakes are almost always super useful. From Ophidian to Sakura-Tribe Elder to Mystic Snake to Lotus Cobra, there have been dozens of very good snake cards in Magic's history, a lot of them in Temur colors. Are we going to go Snake tribal? I don't think so. The first thing I thought when I saw this card was "Wheels" and while that's an obvious thing everyone is going to do, I'm going to do my best to put a 75% spin on this ridiculously powerful commander.

A while back, we brewed a deck where an army of Spiders would fuel our mana factory for us, and I think some of those same tricks are going to work. However, I wished I had access to Intruder Alarm, Opposition, and other tricky Blue cards for that deck and we have them here. Sure, wheeling and dealing is an obvious way to get value with Xyris, but I'm going to be frosting them good and playing much more of a control game. We're also going to force them to draw cards and while that may seem like a good thing to them at first, they're going to learn that Forced Fruition isn't the kind of fruition they were hoping for.

Since our token generation is going to be passive, we'll be able to devote our mana to control effects. We'll keep more of our mana open on their turn, and when we have a lot of snakes, we'll be able to generate even more mana with Earthcraft and Cryptolith Rite. With that mana, we'll try and snipe as much of their stuff as we can. Stealing cards from people is expensive, and it should be expensive. Memnarch takes a lot of mana to activate, but it's worth it. Yasova Dragonclaw can also borrow creatures, as can Captivating Crew. A few of these creatures in the deck are all that we'll need since we're bound to draw some extra cards and find them easily and one should do the trick. Our opponents will churn through their deck, give us snakes to use for mana which we'll use to steal their creatures. They'll have full grips from the extra cards they draw, but we'll hopefully keep them stymied with Opposition and other annoying enchantments like Overburden and Tectonic Instability. They'll have a hard time dumping their hands and we'll take creatures as fast as they play them. With an army of snakes, we should be able to hit them for lethal at basically any time with Craterhoof Behemoth, or just chip them to death with Purphoros and Impact Tremors. Does this sound like a 75% deck yet? Sure, we'll play Teferi's Puzzle Box and Kami of the Crescent Moon just like everyone else, but we're going to do so much more than that, too.

What will this crazy pile look like? I'm so glad you asked.

There are easily 99 more cards that could have gone into the deck. Here are some interactions I included that you may want to keep or not.

I included ways to make Simic Ascendency worth it. Between Earthcraft, Cryptolith Rite, Citanul Hierophants and the Altars, we should be able to generate some real mana with our creatures, which threatens to end the game with Ascendency or Helix Pinnacle. However, Ascendency is good on its own with creatures like Champion of Lambholt, Master Biomancer, and Yasova Dragonclaw. Ezuri should also dump counters on creatures quickly. Dumping a ton of counters on our commander is another way to really dome someone - you hit them with a ton of commander damage and they have to draw and give you snakes if you can't kill them in one hit. I don't feel like I cut anything I needed to make room for cards like Master Biomancer which can get really scary if you're making 5/5 Snakes for every card they draw because you didn't pay the one on their Rhystic Study. If you want to go deeper on this strategy, consider cards like Pir and Toothy, Herald of Secret Streams, Forgotten Ancient, Rishkar, Peema Renegade, and Chasm Skulker. You can cut some of the swipey cards like Memnarch and Captivating Crew, which will lower the mana curve a smidge.

I included "Wheel" effects like Day's Undoing and Echo of Eons because I don't want to deck anyone. It also nerfs graveyard decks a bit, an archetype you'll be helping in the early game. Decking is hard but it's also kind of boring because I don't like Lab Maniac effects. I don't want to win that way and more importantly, I don't want to help anyone else win that way. If you do like the idea of decking people, swap out the Time Spiral type Wheels for ones like Winds of Change. You can even cut them altogether if there's something you'd rather be doing - the cards like Howling Mine will get us quite a few snake tokens.

There is a snake subtheme that gradually made a case for itself as I built and it was not as tough to make room for as you'd think. This deck is going to run Coiling Oracle and Lotus Cobra already, so swapping out a Llanowar Elf for a Sakura-Tribe Scout in a deck with Overburden wasn't that much of a stretch. At that point, adding Shisato, Seshiro, Ohran Frostfang, and Kaseto was easy. You'd likely run Kaseto in any case because it's a great mana sink and you'll always have a snake to target with it. Don't want the snakes? That's sad. Cut the "cute" ones but consider keeping the good utility ones. I'm going to run Mystic Snake because it's one of my favorite cards ever and this deck will need to keep our board from getting swept because we rely on our dorks for mana, but you can cut any snake you want.

Landfall is a way you could go with this deck. I always build landfall in these colors but there's a reason for it - it's quite good. Overburden is a card that helps with that a lot, and we're running Sakura-Tribe Scout so we just need a few more payoff cards. I already have Roil Elemental but you can add Avenger of Zendikar, Tatyova, Omnath, other Omnath or even something like Nesting Dragon or Akoum Hellkite. I build decks like this all the time and wanted to go a different way, but not so different that I didn't add Lotus Cobra and Roil Elemental, I guess. You can cut cuter cards if you want to go this direction, but that's more of a "raw power" sort of approach than a synergistic one with the commander.

If you want to make their lives more miserable with your enchantments, consider cards like Frozen Aether, Mana Breach, Dissipation Field, or Aether Barrier. We want them drawing cards and taking damage but that doesn't mean we want them playing those spells easily. This sort of build can get frustrating for them - so I hesitate to include these suggestions in a 75% article because I think these cards disproportionately hurt more casual players, which is not our goal. Still, we are letting our opponents draw a lot of extra cards and that means they'll have the tools they need to stop us if we're not careful and we're already running cards like Tectonic Instability, so we can't pretend the concept of Stax cards are completely foreign to us. Slow them down as much as you think is appropriate.

All in all, I am very excited about this. Instead of drawing you a ton of cards for no effort, it rewards you for getting them to draw, which is an effect I'm not used to seeing, especially on Temur cards. This commander generates a lot of tokens for us, which I am happy to use to churn mana or sac to an altar or clamp and we can even trigger snake-specific combat effects. I'm not going to question how these non-flying snakes survive being shed from the body of a flying Leviathan like the art suggests, but the implication of snakes raining from the sky DID remind me to play Impact Tremors, so don't let anyone tell you art doesn't influence real life. I'm building this the second my copy of Xyris arrives and as more cards from the Temur deck are revealed (I wrote this article a few days ago. For you, not for me, for me it's right now) I'll be theorycrafting on the fly, waiting for my new cards to join the ones I have set aside for the deck. Commander 2020 looks to be one of the better Commander sets they've done and I look forward to jamming with new commanders. That does it for me - until next time!