Mark Rosewater knows, you guys. Heâs very aware that we all want Ink-Treader Nephilim to be given errata that allows it and the four other four-colored Nephilim to be usable as commanders. Heâs aware that a lot of you just use the Nephilim as your commanders already. The dream of a four-colored Commander product with the five Nephilim as the five commanders may never happen. However, they didnât entirely ignore our wishes. While weâre not getting a four-colored commander in Battle for Zendikar, we are seeing a Nephilim of sorts, and it couldnât be in better colors! 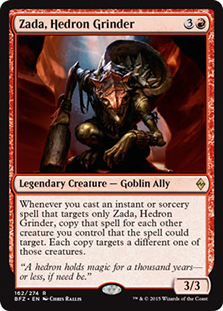 Isnât this good enough to eat? While this targets other creatures you control and forces you into mono-red if you want this as your commander, there are some very good cards that will be auto-inclusions in the deck. Not only that, but sheâs a Goblin, which is handy because I want to go wide and play as many Goblin tokens as I possibly can! Iâm legitimately stoked to build mono-red Nephilim. Are there cool cards we canât play because this canât hit opponentsâ sides and because it forces you into mono-red? Obviously. Is that going to diminish my enthusiasm for this deck? Not in the slightest. I actually donât want to preamble anymore because Iâm ready to just brew, so letâs do the brew voodoo thatâ.â.â.âIâ.â.â.âdoâ.â.â.âLetâs build the deck.

Itâs such a bummer that we canât play Swift Kick in this deck. However, weâll be giving opponents swift kicks with our Goblin army.

â.â.â.âI literally couldnât be more disappointed in myself for that one. Truly, I apologize.

Iâm sure youâll forgive me once you start looking into what this silly deck actually does. Youâre basically casting a bunch of copies of a bunch of pump spells and cantrips by virtue of your commander reflecting any spell you cast on it at your whole side. While burning opponentsâ dudes with a bunch of copies of Lightning Helix or Prophetic Boltâwhich Iâm pretty sure are both spells you can aim at Ink-Treader Nephilimâweâre forced to be a little more creative. What I like doing is playing about fifteen copies of Crimson Wisps so I can draw cards until I find Fiery Gambit, Fists of the Anvil, or a cool spell like that then alpha-striking. Skullclamp seems like a bro here, and if we can make enough extra Goblin tokens accumulated, I wouldnât hate murdering a player with Burn at the Stake, especially if we play Mark of Mutiny on our side right after and get ready to swang at him or her.

I used the Goblin deck from my Krenko article as a basis for this deck just because I wanted a decent skeleton of a usable Goblin deck in place before I started throwing doofy cards at the deck until I had a pile of stuff like Telim'Tor's Edict and no real way to win without my commander. I think starting with a Goblin deck and adding weird stuff is not a violation of our guideline pertaining to weakening a stronger deckâwe merely used it as a base to make something entirely different, and something, I might add, I think might be even stronger. Youâre certainly going to surprise people. The best part is that, for the most part, this deck is cheap to build, meaning you can throw it together and keep it together without worrying about tying up too many cards you want in other decks. You can swap cards like Kiki-Jiki, Mirror Breaker and Eldrazi Monument in and out, but the core will be the same.

In terms of strategy, this seems simple. Try to accumulate some Goblins. This will generate you a lot of card-draw triggers when you have your commander out and a few Goblins to copy the cantrip spells. I donât think this card-draw will make the deck too consistent because youâre relying on having Goblins. Itâs not a win-more deck per se; it is going to snowball out of control. Crimson Wisps will draw two cards, you can make some Goblin tokens with Goblinslide, and you can play another cantrip to fill your hand up and hopefully start building an army. Once you have enough to go lethal, play a few pump spells, and swing with huge Goblin tokens. This deck will build slowly and be very susceptible to removal, but it will also be very explosive when you have enough mana to play a few spells in a turn. Giving the Goblins haste will be important with all the sorcery-speed removal running around, and cards like Mass Hysteria may need to go in, as much as I like Mark of Mutiny and its ilk for this purpose.

I think my favorite theoretical way to win with this deck will be trying to win a bunch of Fiery Gambit flips. Itâs inconsistent and powerfulâitâs perfect. You get lucky on flips, and opponents take 42 damage. Get unlucky, and you get nada. This is a fun way to try to win the game, and it rewards you for having a large, formidable army of Goblin tokens. The more Goblins you have, the more chances you have to get those winning flips, and itâs not as though this is the only reason to have a big army. The deck synergizes with its other win conditions nicely: Burn at the Stake, Arcbond, Fiery Gambit, and attacking opponents with a lot of Goblins all require you to have boots on the groundâthe more the merrier.

I really think Goblins is the way to go here. I didnât even look at Allies or non-tribal because it all seemed so perfect. Goblins can give us so many tokens so easily, and with Krenko, Mob Boss doubling our board and so many spells that can produce multiple tokens for one card, it was a no-brainer. Cards from our previous Goblins deck, like Quest for the Goblin Lord, are accidentally amazing in the deck. Goblin Rabblemaster and Goblin Assault could prove to be a bit of a liability, but I am hoping they can stay because I love them. I wish we could play token-doublers here, but we canât have it all. Could Spawning Breath warrant a look? Could we try to build a Storm deck with rituals to draw off our cantrips, giving us one huge turn to cast a million copies of Ignite Memories? There are a lot of fun things to do, but I think having a Goblin beatdown deck that can accidentally Fiery Gambit for the win is the most exciting option to me. Iâm really stoked about this deck, and now I will read the rest of the spoilers with this card in mind.

What do we think? Is this idea so obvious everyone is already bored twenty-four hours later? Is it going to be a fun, cheap deck to build (if you exclude money cards like Kiki-Jiki that arenât totally necessary), and are you as excited as I am to get it built as soon as the set is released? Will we see new Goblins, Allies, or spells to include soon? There are a lot of ways to go with this card, and I really want to see where you think youâd go with it. Until next week, leave it in the comments!