Welcome back to Building with Flavor! My original article covers the basics of getting started with a flavor build of your own. Since I've covered Sisay and Tahngarth the last few articles, both heroes of the Weatherlight crew, I thought it was time to turn to their nemesis: Phyrexia! And who better to represent Phyrexian than Greven, Predator Captain! I'm not going to use up space talking about Greven's story when I already have a couple paragraphs in my Commander 2019 Flavor Gems. 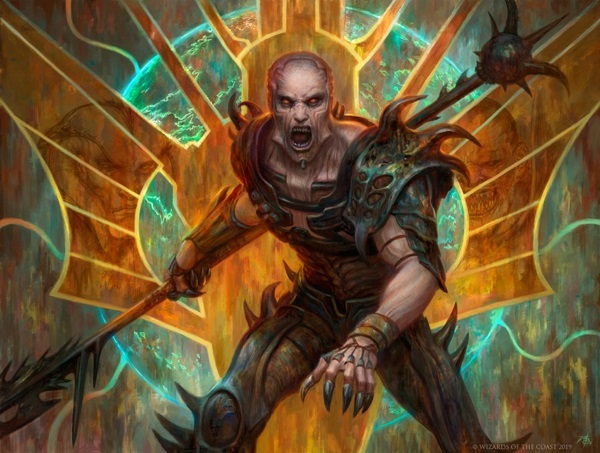 "Rage is the only freedom left me."

Putting together a powerful yet flavorful deck with Greven il-Vec is easier than you might think. Tahngarth often had to stretch for playable cards, but Greven was designed to interact perfectly with the plethora of Phyrexian cards out there.

Depending on how restrictive you want to be, there are plenty of options for both New and original Phyrexian flavor. Personally, I don't think making too many distinctions between the two is worthwhile, since the philosophy is mostly the same and you'll see generally the same kinds of horrible cyborgs in both. From a gameplay perspective, however, the original Phyrexia was mostly focused on life loss. That means you'll find mechanical synergies with original Phyrexians more so than New Phyrexians, who tend to be focused on counters.

Let's start with the explicitly Greven-themed cards in the new Greven's color identity.

There are a handful of others with Greven quotes, like Rolling Thunder, Scare Tactics, or Seismic Assault that aren't really what this deck is looking for. With those out of the way, let's look at the Phyrexian-themed cards to fill out the deck.

When dealing with the flavor of the original Phyrexia, one important thing to note is that pretty much OG Phyrexian card worth playing have already been reprinted. There are SO MANY potential Phyrexian cards for this deck that I can't possibly list every possible inclusion, so I'm just going to give you my original stack, and then the decklist will show which made the final cut.

Keep in mind, you're looking for two things here: the 'ability' to lose life as well as creatures with high power and low toughness for Greven to sacrifice. Tutors aren't really necessary in this deck, Greven will be keeping your hand full. With that said, let's break down some flavor inclusions. Some of these cards might be New Phyrexian, but in my view that's okay. Phyrexia and New Phyrexia's random cards feel like they belong with one another

First-Sphere Gargantua, Phyrexian Gargantua, and Phyrexian Rager fill your hand, lose you life, and give you a body to sacrifice. Handy all-around. Phyrexian Arena keeps your hand in cards, and gives some steady life loss.

Phyrexian Delver, Reanimate, and Phyrexian Reclamation allow you to pay life to recur a creature, a good deal in this deck.

Gallowbraid and Morinfen are creatures of Rath, the artificial Phyrexian plane Greven calls home. They're contemporaries of Greven, and their high stats plus their cumulative upkeep of one life makes them ideal.

Hex Parasite is one of those great utility creatures, and it works twice as well in Greven. Remember, X can be 0, so you can just pay two life as much as you want. If it gets a buff? Even better, you can sacrifice it for cards.

Immolating Souleater and Moltensteel Dragon both have firebreathing for Phyrexian Mana. This means you can pump them up while losing life to pump up Greven, and then sacrifice them for the card draw.

K'rrik, Son of Yawgmoth allows you to pay two life for ANY Black mana cost, which greatly expands the avenues for life loss in the deck. Having Lifelink and being able to grow will also help you recoup some of that lost life.

Magus of the Mirror and Soul Conduit give you alternate win conditions where you trade life with an opponent. In a deck that can lose life fast, this is a great safety valve.

Psychosis Crawler makes sure your opponents lose life as you draw cards from Greven's second ability.

Tsabo Tavoc is a nostalgia inclusion. She's good at taking out enemy Commanders, blocking, and is a great way to refill your hand with Greven's second ability.

Batterskull is the Phyrexian life gain this deck needs. It doesn't matter how much you lose if Greven gets it all back on the attack. Loxodon Warhammer is a more questionable flavor include, but I think the fact that Mirrodin becomes New Phyrexia lets it slide. Eternal Thirst and Whip of Erebos are much harder to justify but too powerful to exclude.

Mimic Vat lets you make that perfect sacrifice for Greven every turn.

Phyresis and Tainted Strike are for that surprise win, but use them sparingly if you want to continue to have friends.

Without Further ado, let's look at that final decklist.

Overall this deck is pretty powerful, despite the high flavor ratio we've included. It was important to me to keep this one as flavorful as possible to match my Sisay deck. Greven was fantastically designed to work with even the 'bad' old Phyrexian cards, like Reckless Spite, so it'll be fun to give a number of those cards new life in this deck.

I won't always be building these flavor decks in real life, but I fell in love with Greven here pretty quickly. My podcast, The Vorthos Cast, will be meeting up at MagicFest Atlanta to duel our flavorful Commander decks. Greven will be mine, and next time I'll talk about the other three!