Fitting with our Shadows over Innistrad theme, todayâs column is something of a mystery story. Although mine doesnât involve real-world insanity, it certainly has elements of the unknown and obscure in spades. If, like me, youâre steeped not just in the lore, but in the crafting of Magic: the Gathering, youâll likely find todayâs piece quite fascinating.

Ordinarily my column here deals with the preconstructed. Today, weâre going to tilt the prism just a touch, and look at a mystery of the pregenerated.

My story begins two years ago. Back then, I owned my friendly, local gaming store, and like many I enjoyed the opportunity to find the oddities and curiosities put out by Wizards of the Coast in support of Magic over the years. Buried in the back storeroom after I bought the store, I found a poster-quality map of the world of Kamigawa. Wizards doesnât do a lot of maps for their worlds, due to a lack of time/resources. Finding one was amazing.

I came across a Khalsa Brain playmat. I had no idea what it was when I saw itâ just a tan, cloth playmat with the Magic logo in the center and old-school card art on both margins. Turns out these were from 1999, when Khalsa Brain had the license from Wizards to make officially branded playmats. What else was hitting the shelf around that time? Urza block. It was intriguing to discover the history of that playmat, since the game we all love is at the point now where it actually has âhistory,â not just ârecent events.â Like many, I find the darker and more obscure corners of this history, the ones where the light of public attention rarely shines, to be fascinating indeed.

But the item Iâm discussing today wasnât a hidden treasure uncovered in the store when I got it. Instead, itâs something someone else brought in.

For smaller stores like mine, itâs not at all uncommon to have another, larger regional store come in as a vendor for the days when youâre holding a major Magic tournament. With their deeper inventory levels and acquisition capital, they can offer some services a smaller store canât â and will happily pay for the privilege. On one such event day, I noticed this in the vendorâs case in my store: 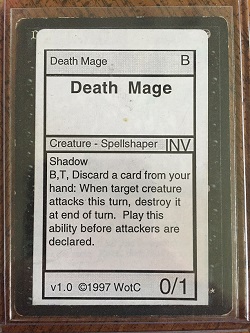 Now, that was not something you see every day. The dealer was reputable, I had no doubts about its authenticity, butâ.â.â.â what was it?

âIâm not entirely sure myself,â said the vendor. âBest guess says itâs a play-test card that got out of Renton somehow.â

Now that would be a rarity! Wizards R&D mocks up cards all the time for play-testing purposes, and that certainly seemed plausible. After all, the names of cards can change wildly from when theyâre first designed to when you open one up in a booster pack. Just because âDeath Mageâ has never seen print, doesnât mean it wasnât the predecessor to some final card that was released. Alternately, it could have been a card killed before it ever saw the light of day. That happens, too; proverbial clippings on the editing room floor.

The INV in the space where set symbols go seemed to be the most obvious clue. The copyright at the bottom of the card stated 1997, and Invasion hit the shelves in September of 2000. Could this have been a play-test card from Invasion? A closer look at the card the sticker was overlaid onto did not discredit this theory, since it appears to be Drift of the Dead, a card released in 1995âs Ice Age.

But if thatâs from Invasion, it suggests a pretty intriguing alternate timeline. We know from Mark Rosewater that some of the mechanics developed for Tempest went into Urzaâs Saga, such as Echo and Cycling. In this case, the tell is in the creature type: were Spellshapers originally going to be in Invasion, but instead got bumped up one block into Mercadian Masques? And what to make of Shadow, a mechanic not seen since Tempest block three years prior to Invasion. A returning mechanic, perhaps?

And the last questionâ how did it even get out of Wizards headquarters to begin with? Knowing none of this with any certainty, nevertheless the card was mine by the end of the day.

And as it turned out, none of these things were true. Of course, I wouldnât know that for a couple years.

Flashing forward to the present day, Iâve been taking stock of my gaming collection lately with an eye toward right-sizing my collection. This is not an uncommon thing to do at the mid-life stage, when you begin to accept the fact if that amazing game you bought a year ago is just sitting on the shelf still in its original plastic, maybe itâs time to let go of it. Thatâs when I came back across âDeath Mage.â

The Mage still hadnât lost its power to confound and mystify, but before looking to sell it, I thought it would be best to try and answer at least a few of the questions Iâd had myself when I first came across it.

I began with Gatherer. We know now that there were no Spellshapers or Shadow creatures in Invasion, but was it possible it might have become something else down the line? I looked for any Black creature with that sort of taunting effect, and came up empty. If Death Mage once existed, he never became an official card.

What cracked the case, though, was something that seemed simple in hindsight: Google. Operating under the idea that this was a prototype card, it hadnât even occurred to me to simply Google it, but when I did (and did some digging), much of the mystery was revealed. While itâs true that Death Mage never existed as an official Magic card â in any form â it was true that Death Mage did officially exist- and what a story it has to tell.

Back in 1996, with Magic still in its relative infancy, Wizards of the Coast was keen to form some sort of organized play event for the top players of the game. That year, they introduced the Magic Invitational (originally known as the Duelist Invitational up until the magazine ceased publication). Wizards would invite the top sixteen players in the world to compete, with the winner getting to design a Magic card. Itâs worth mentioning that Invitational winners would ultimately go on to design some very noteworthy cards, such as Meddling Mage, Solemn Simulacrum, Dark Confidant, and Snapcaster Mage.

The Invitational didnât just focus on a single format, such as Standard (then known as âType IIâ). Rather, it sought to test different skills of the competitors, and introduced some formats or variants that didnât even officially exist. One of these was âDuplicate Sealed.â Here, in what Mark Rosewater would call âone of the most skill-testing limited formats,â players would each be given the exact same cards to build a deck from. With each player knowing what every other player could potentially be playing, it made for a very deep metagame, Magicâs equivalent of âhe knows that I know that he knows that I knowâ¦â

But for the Invitational, Rosewater made sure to raise the bar. In 1999, for instance, the sealed pool was deliberately crafted from cards that were all suboptimal, to see what treasure could be made from a pile of trash. In 2000, Rosewater threw a different curveball, tweaking the casting costs of the cards. Would players still run Dark Banishing if it cost

? One way to find out! As the players opened their pool, they not only had to take in all the different cards they could use for their deck, but had to also re-assess them to see if they were worth playing at their new cost â all while contemplating what their opponents might be thinking, too!

Not to be outdone, in 2001 Rosewater tweaked the format again. This time, he wanted to see what the players could accomplish using nothing but 1-drops. Not only that, but there would be ten brand-new cards included in the draft pool, one spell and one creature for each color, the players would never have seen before and would have to evaluate on the fly. For Blackâs spell, âNasty Spiteâ would destroy a non-Black creature, but in addition you also lost four life.

And as you may have already surmised, the Black creature? Death Mage.

Thatâs right. It wasnât a play-test card, but rather a card created specifically for the 2001 Magic Invitational.

So now we know what the card was, how it came about and what its purpose was, leaving only one last mystery yet unsolved.

How did it get from there, to here?

The 2001 Magic Invitational featured a ton of names even many casual players might recognize. Jon Finkel for one, the only player ever to get an official Magic release (Deckmasters: Finkel vs Garfield, released in December of 2001). Kai Budde, who would ultimately win that year. Chris Pikula and Brian Kibler. Antoine and Oliver Ruel, Hall-of-Famers both.

Sixteen of the yearâs best. Sixteen sets of Death Mages. According to the good folk at Magiclibrarities.net, each of that yearâs participants got a set of one each of the new cards as a souvenir keepsake. Magiclibrarities.net has an image of the set given to participant Chris Benafel, and his Death Mage sticker was adhered to a different Black creature card (you can see the toughness of 2 peeking out of the corner). So the copy I possess is clearly someone elseâs.

While it may seem curious a player might give up such a curio keepsake, itâs important to note what might seem unusual for us might me a little more ordinary for these players. Players âon the circuitâ can rack up all sorts of commemoratives and mementos, and after a while it might all start to resemble clutter (kind of like what Iâm going through now that prompted me to write this piece).

Itâs also worth pointing out the tale of Australiaâs Tom Chanpheng. Chanpheng was the winner of the 1996 World Championships, and it was like a Hollywood story. Having forgotten to register a playset of Adarkar Wastes in his deck list, the judges forced him to play with Plains instead. That wasnât just bad, it could have been a disaster, since it was the only source of Blue mana in the deck. Suddenly every Blue card Chanpheng drew was a dead draw, uncastable. Despite it all, Chanpheng pulled it off, and as part of his spoils he was given a unique, one-of-a-kind Magic card: 1996 World Champion. It was sealed in lucite, and at the awarding a video was shown showing every other copy of the card from the printing sheet being destroyed.

After that story, after that winâ.â.â.âyouâd think this would be something you might cherish the rest of your life. A daily affirmation of how the will to win can overcome adversity, how being dealt a bad hand wonât stop determination and cleverness. A testament to triumph, right there above your fireplace.

Nope. Chanpheng â for reasons entirely his own â flipped it five years later for $17,500. So long and thanks for all the fish!

So who knows why, over a decade later a Death Mage found its way to the vending case in the heart of Kentucky.

Unlike the source of the madness and insanity overcoming Innistrad right now, perhaps some mysteries are never meant to be solved.