I am not flavor-driven when it comes to Magic cards. In the demographic terminology so common in todayâs Magic discussion, that makes me the âperson who likes playing the game sometimes but doesnât really care about all the art and text and stuff.â In my infinite humility, I do acknowledge that cards need some little doodle above the text just so that we can recognize them more easily, but actually caring about what those pictures are isnât usually my thing. This also applies to flavor text, novels, spinoff sitcoms, and so on.

The exceptions occur when the flavor of the game is so flagrantly bad that I canât just ignore it and keep on doing my thing. If Iâm hanging out with someone and he quotes some silly meme under his breath, I can move past it eventually, but if he loudly declares, âSay, I believe nonmales to be inferior!â Iâm not going to let that shit slide. That brings us to my fairly brief mention of stupid, sexist art in the game in last weekâs article. That was a Steve Argyle piece. Argyle isnât the only whoâs creating art thatâs basically a bunch of fancy arrows pointing at tits, but heâs certainly among the most prolific and (somehow) well-respected in that genre.

The easy way to start would be to choose that artwork. You know the one because itâs been plastered everywhere by Wizards to promote recent sets. But I have to keep something in my back pocket to keep people reading, donât I? Thatâs called a âtease,â kids. But not in the same way that Argyle would mean it. Instead, Iâll call attention to one of his lesser works, Naya Battlemage: 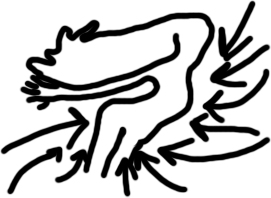 This might look a bit different, but it still captures the essence of The Piece: ludicrously long limbs, a pose thatâs actually quite uncomfortable if oneâs spine will even allow it, and a bunch of vines that areâ.â.â.âgood lord, I canât believe Iâm actually trying to summarize leafy bondage this week.

Iâm starting off with this one to demonstrate that itâs not just showing a bunch of cleavage that can make Magic art eyerollish. In this case, itâs the general pose that accentuates everything sexual about her and nothing else. The entire composition is, as demonstrated above, pointing at her chest and going, âHey, you! Look at this because thatâs whatâs important here!â Her pose doesnât demonstrate strength, power, or magical ability like it would if it were a male in the image. Itâs solely about her figure.

Before I go on any further, itâs time to talk about objectification because the non-feminist of yâall (and if we make a pie chart of âall yâall,â the feminist part is a rather small sliver) donât seem to understand this concept at the moment. Sexual objectification is not any image of someone thatâs sexually appealing. Objectification, as the term implies, treats that which is sexually appealing as an object rather than a as human (or vampire, or weird cat thing) with agency of his or her own. Itâs often done by emphasizing body parts over the individual. Ms. Battlemage is certainly being objectified, but thatâs far from the most objectifying art in recent years.

Now, this is just silly.

This is a painting of tits. I decline to even call it a true tihtmonsterâthe focus on the tits overwhelms any possible monsterness of the supposed vampire. Yeah, at the very tippity-top of the frame, thereâre some teeth, so itâs justified as being, âWoo, vampire! It can bite you!â but itâs so far removed from the focus of the piece (the tits) as to be entirely irrelevant. Strangely enough, the card specifically calls for a certain aspect of vampires to be non-sexually objectifiedâspecifically, their teethâand it doesnât come close to doing that.

While weâre talking about Naya Battlemage: Did someone get paid to write that flavor text? Because Wizards should really try to claw that back and invest in like, a salad bar or something because that just isnât getting the flavor job done in an effective way. âOkay, guys, we have these planes where only three colors of magic exist on each one! So, letâs have a person hint that she thinks there are only three kinds of magic! She can say, âAll three schools of magic!ââ Then, once the last bit of subtlety was sucked from the room, one of them should have realized that she is a lying battlemageâ.â.â.âLook at the card! She can plainly only use red and white mana. I am amazed that the flavor text manages to be that insipid while still inaccurate in so few words.

Seriously. Look at this in hindsight, Wizards. What would you rather have: that italicized text or delicious, healthy midday snacks? You could have even had avocado salad. Saladsâ.â.â.âof avocado. You decide.

Anyway. A lot of people like to pick on this Wayne Reynolds illustration:

So. Itâs a cartoon cat, anthropomorphized enough that it has breasts. But you know what? Iâm relatively okay with this. Sure, itâs bizarre. But I genuinely believe that the cat is about to kick the shit out of that text boxâsheâs not sitting back acting sexy so that we can admire her. The curves of her odd female form arenât unduly emphasized like on Argyle illustrations.

Now on to our main attraction. 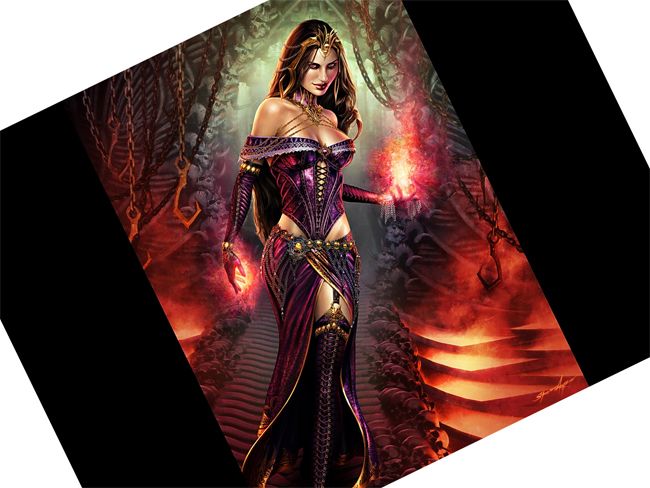 Much better. This lets us focus on some of the subtleties of the illustrationâlike how the big, scary hooks are gravitationally attracted to her chest.

For any women out there, hereâs a challenge: Walk down a flight of stairs with one foot directly in front of the other while tilting your shoulders so that theyâre forty-five degrees from the direction youâre walking, but have the breast on the back shoulder (above the front foot) appear just as large as the other one. If you can do that, have I got a great job for you in the booming field of fantasy modeling!

So, whatâs wrong with Liliana aside from looking a bit silly? Well, this is sexual objectification at its magical peak right here. Everything about Liliana is constructed to make her desirable to a straight male audienceâfrom the curvature to the body pose to the devilish smile. Hereâs where we get to objectificationâs close relative: the male gaze. It was coined to describe how films would show everything from a straight male point of view, lingering over a womanâs curves while never doing the same thing with a manâs body (because those are icky). Any objectifying card in Magic is going to assume the person looking at it is a straight male, and Liliana is the nadir of that.

Now, I know that a lot of people who care a lot more about flavor than I do are going to come to Wizardsâs defense here: The character of Liliana is a sexy one, obviouslyâwhy canât I see that? She just happened to have some sort of storyline transition that took her from a weird, ghostish appearance to that of an extremely attractive woman. (I have no idea if this actually happened; Iâm just assuming and making things up. Writing about Magic is easy.) Did they happen to give her some sort of agelessness, too? That would be super-convenient so that Magic players wonât ever have to look at a declining-in-looks Liliana. Iâm sure that Mr. Argyleâs piece perfectly captured what the art direction team was going forâ.â.â.âwhich makes this a case of a sexist trope being passed off as a worthwhile character. Sheâs just a femme fatale in silly clothes.

Liliana is, quite simply, an attempt to sex up Magic in order to win over more teenage and twenty-something men (possibly because the average age of the game was so low for so long; whether it had started rising already or Wizards just wants it to rise, I donât know). There is no character there.

(Her card isnât even the most objectifying depiction, by the way. That honor would have to go to Argyleâs alternate version of Snuff Out or the ridiculous depiction used for promotional purposes and Pro Tour t-shirts.)

So, what can Magic fans do about this? Nothing. Sorry! If you threaten to buy less of the product because you donât like it, youâre committing an act of warâor something.