The Gods have returned!

No, not Hazoret, The Scarab God, and friends. We're talking about the original gangsters.

The original Theros was a Greek-mythology themed set that introduced the concept of "gods" to Magic, and the original quintet of gods, Heliod, Thassa, Erebos, Purphoros, and Nylea all saw medium to heavy amounts of play in Standard. Well not only are the gods themselves back, but their influence is sure to be felt through the entire set.

Which of course includes our official CoolStuffInc.com preview card!

Let's take it from the top and work our way down:

The gods were a major part of the lore of the original Theros, and it would seem that has not changed. A godly intervention feels like a pretty big deal, and with an X in the casting cost we're probably looking at a large effect. X spells don't always make their way into Standard, but with Arboreal Grazer, Growth Spiral, Nissa, Who Shakes the World, and various mana creatures being one of the major pillars of the format, any X spell must be looked at seriously. 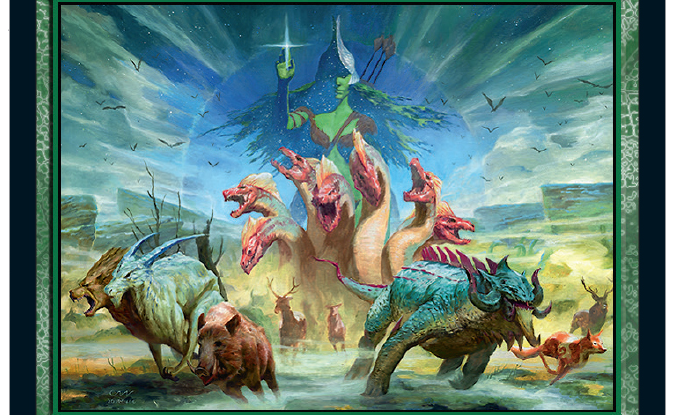 That is quite the motley crew of creatures. A huge hydra, beasts, boars... and look even Oko got to some of them as there's definitely some elk here as well! The art is certainly epic, with Nylea overseeing some sort of very important looking spell that seems to be calling a horde of wild beasts to action.

Given the name of the card, the fairly epic looking art, and the

in the mana cost, a rare sorcery makes a lot of sense. So let's see what Nylea is up to.

A modal spell with an

in the cost is very uncommon.

In a lot of ways you could already consider an X spell modal, as while you can necessarily choose to do different things with it a Fireball for 2 is a very different spell than a Fireball for 14. Modal spells usually tend to sacrifice power for utility, as a card like Izzet Charm is essentially just a bad Spell Pierce, Shock, and Careful Study that makes up for inefficiency with versatility. X spells tend to have this same issue-

to deal two damage is completely unplayable, as is

to deal nine damage, but the flexibility of being able to do either makes up for it.

Very interested to see where this one goes, and if there will be enough power here to be worth the trouble.

-Search your library for up to X land cards, reveal them, put them into your hand, then shuffle your library.

Oh boy, Mind Spring and Sylvan Scrying had a baby!

Like a Fireball for one, Nylea's Intervention for one is relatively unexciting. Sylvan Scrying is a Legacy power level card for decks that really want to find a land that has seen play in all formats, but adding a Green to the mana cost is not a good look. However, as you begin to scale up in mana Nylea's Intervention starts to look quite a bit more appealing.

At four mana it's a double demonic tutor and strict two for one card advantage. Things only get better the more mana you put into it, but it has in a built in limiting factor that is not usually seen in card draw spells. Even if you are able to funnel eight mana into Nylea's Intervention and tutor up/draw six cards, you are only allowed to play one each turn anyway which makes it difficult to reap the full rewards in a reasonable time frame. Drawing a bunch of lands is also a lot different than actually drawing cards, as anyone who has ever been mana flooded can attest to.

So we end up with quite the puzzle.

The power level here is undeniable. There are many very powerful lands in Magic, many of which get better when assembled in certain combinations. There's a reason Primeval Titan is the best titan by a large margin! The problem is that while Nylea's Intervention is an amazing setup tool, you need to know exactly what you're setting up to use it. Casting Nylea's Intervention with any sort of Exploration effect in play feels like a big time play, and that's to say nothing of what kind of combos it can put together.

It's not simple, but this is an extraordinarily powerful effect we've never really seen before.

Nylea really wants to put some important lands together, but did we mention that she also hates flying creatures?

Hurricane is a clearly Green effect, and while it feels random this is quite the rider text to have on your unique combo/tutor card. Evasive creatures tend to be good against Green decks in general, and the rate on the second half of Nylea's Intervention is very good.

should wipe the skies completely clear, which is an abundantly powerful effect to have access to as a Green deck. This is much more of a sideboard effect that feels very disjointed from the first part of the card, making this card an odd combination that is going to lead to some weird game states. "The weird lands deck just Hurricaned all of my flyers out of nowhere!" and "I was manascrewed against my Bant Spirits opponent but was able to find a few lands with Nylea's Intervention and get out of it" are both not the intended plans for the card, but will be things that happen beyond what players are trying to do with the card.

It's an unexpected line of text after seeing the land search ability, but either side of this modal spell is very playable by itself when the situation calls for it, making the other half just gravy.

"I bring a wilderness no law can tame."

You're such a rebel Nylea.

Credit to Zezhou Chen for the sweet art though, it's an epic piece.

So when you put it all together, you get this: 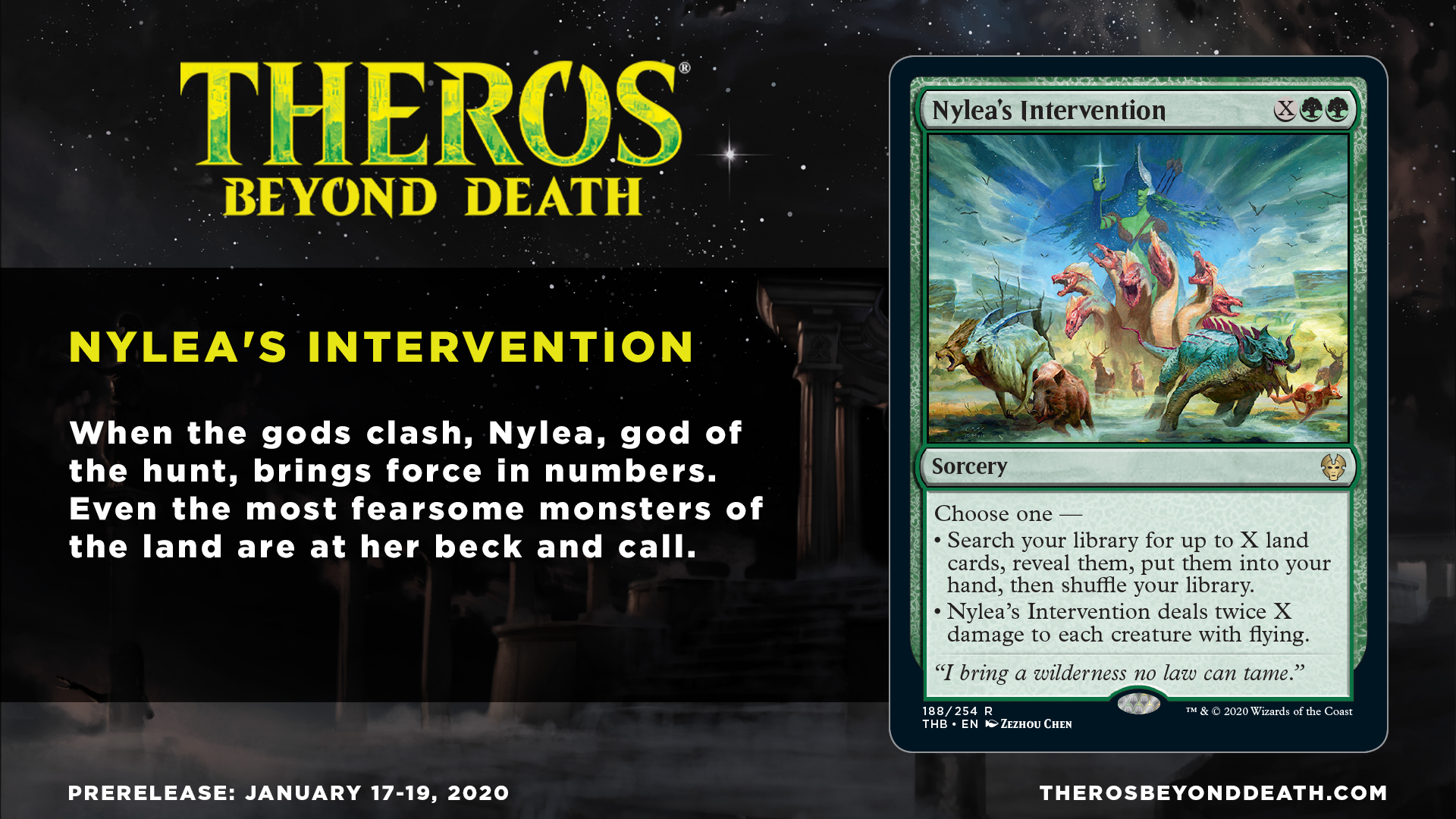 Nylea's Intervention is a very powerful Magic card, but it's not obviously universally powerful like Murderous Rider or Teferi, Time Raveler. It is going to require some specific deck-building to utilize properly, but don't underestimate the ability to tutor up multiple cards at once while also gaining card advantage at a very reasonable mana cost.

There will be a point where Nylea's Intervention is an important piece of a major deck in some format; figuring out which deck and which format is going to be the hard part.