Editors Note: This article was written before Reidane, God of the Worthy was previewed. Jim's thoughts on the card have been added to the end.

I've been playing Snow-Covered Mountains in my Legacy Goblins deck for over a decade. Well before there was Arcum's Astrolabe, Dead of Winter, or Ice-Fang Coatl, you could often find me cracking a Wooded Foothills for my beat-up Ice Age Snow-Covered Mountain to cast turn one Aether Vial in the top 8 of StarCityGames.com Open Series event at some random hotel on the east coast.

At Grand Prix New Jersey 2006 I played a Goblins mirror in the early rounds where my opponent was playing Snow-Covered Mountains in his deck. Game 2 he played Glacial Crevasses against me, a bizarre Red enchantment that perplexingly allowed you to sacrifice a Snow-Covered Mountain to Fog for the turn. It was a sideboarding choice that fundamentally misunderstood how the matchup played out and was unsuccessful in beating me, but got me thinking...

"Why am I not just playing Snow-Covered Mountains too?"

There really was no gameplay reason for me to play Snow-Covered Mountains, as I certainly was not putting Glacial Crevasses anywhere near my deck, but there was also no downside. Maybe my opponents would put some extra thought into why I was playing them, or perhaps maybe they would think I was playing Glacial Crevasses in my deck. Plus, I've always liked the look of old basic lands so the Ice Age lands were right in my wheelhouse.

That was that and from then on, I was playing Snow-Covered Mountains.

Aside from some minor gameplay edges from having uniquely named basics (trying to improve the odds on your Tainted Pact or hurt your opponent's potential Predict), there weren't really many reasons to actually play snow-covered lands in your deck. You weren't really giving anything away by playing or not playing them, so it mostly was a stylistic choice.

This all changed with Modern Horizons.

Snow was a major theme in the set and consequentially became a major player in Modern and Legacy, which made snow-basic lands a necessity. Now if you played an Island on turn one and said go, you were actually leaking a large amount of information to your opponent about not only cards that may not be in your deck, but about your archetype as well. When the possible threat is Glacial Crevasses, nobody bats an eye, but when it's a bunch of format-defining cards, it matters.

As such, snow-covered basics became essentially mandatory for any serious tournament play as you're giving up a small edge by not playing with them. In essence, Wizards of the Coast had "soft banned" these wonderful lands from tournament play:

Choosing what basic lands you want to play with has been a tournament Magic player's rite of passage forever. Do you like foils? Or maybe old school lands? Or maybe you're a trust fund kid and like Guru lands? There was always a type of basic land to fit your style, something that Wizards of the Coast played into. Textless lands, promo lands, Euro lands, full art lands, borderless lands, Godzilla lands... the list goes on and on. And unfortunately, that list is now "cool basics I can't play because I need to play snow lands."

Well, Standard, Historic, and Pioneer are no longer safe from the chill. 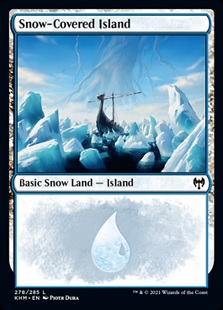 Snow returns in Kaldheim, and while it's actually a pretty sweet mechanic with a good amount of design space, the snow land problem returns as well. As of writing this almost 200 cards from Kaldheim have been previewed and not a single one presents any sort of a detriment to playing snow-covered lands. Once again, as they were in Ice Age, Coldsnap, and Modern Horizons, snow-covered lands are all upside. This once again means that it is technically incorrect to not play them in any scenario where there aren't open decklists.

And please note this is not just from an aesthetic standpoint, as gameplay-wise there should always be some sort of cost associated with, well anything. Pretty much everything has some sort of risk/benefit analysis in Magic. There are easy ones like playing Shocklands or too many of the same Legend, but even just putting a one-drop or seven-drop in your deck comes with the risk of drawing it too late in the game or too early in the game respectively.

At present, snow-covered basics present almost no risk at all. Further than that, they are actually a direct benefit even if you aren't mechanically using them for anything as there is the potential to misinform your opponent.

Is this a reason to not randomly play snow lands? Sure, but is it a fun reason? Absolutely not. These sort of all-or-nothing hosers have been phased out of Magic for a long time, and with good reason.

What I'm suggesting is something more subtle:

Exile Target Creature. Then that creature's controller searches their library for a non-snow basic lands and puts it onto the battlefield.

Path to Exile is one of the best removal spells ever printed, but it's actually worse in formats where games go longer and mana curves are higher like Standard. The Warm Light is definitely worse than Path to Exile, but ends up being a superior Terminate against decks playing all snow-lands.

This is the target - have cards that are good normally but give a slight benefit against snow-covered lands. This way players need to think twice about playing snow-lands for little to no benefit. Oh, and they could do with printing a playable White card once and a while too!

This is fun, let's do one for each color!

Counter target spell unless it's controller pays 2. If that opponent controls a snow land, scry 2.

Quench is definitely on the fringe side of playability in Standard. If the situation calls for it Quench can be a passable card, but for the most part it goes dead too quickly. Giving it a little scry boost when your opponent has a snow land in play is a natural upgrade that is nice but not overpowering.

Target opponent reveals their hand. You choose a nonland card from it. That player discards that card. This spell costs 1 less to cast if its target controls a snow land.

This one is probably too good, but would certainly be a nice tool in older formats. Two mana for targeted discard is fine in Standard but never amazing, as it usually comes with upside like Agonizing Remorse. Without an exile clause or any other perks, Chilling Inquisition is medium at two mana, but once your opponent plays a snow land you get Thoughtseize with no downside.

Hot Coco Goblin has first strike if any opponent controls a snow land.

The card I tweeted about which spurned the idea for this article, Hot Coco Goblin is the perfect example of what I'm looking for. There's never been a 2/1 Goblin for one mana with no drawback, and we're at a point where they aren't afraid to print that and there are never enough one-mana cards in sets anyway.

Hot Coco Goblin is very playable by itself, as Red is always looking for 2 power creatures for one mana, but it gets a nice bonus if your opponent is playing snow lands. This bonus can be quite good, but also may not matter than much if they aren't interested in combat - exactly what we're looking for to dissuade but not majorly punish snow lands.

Sylvan Ranger is fringe playable in the same way that Elvish Visionary is as far as Standard goes, but making it into a Sylvan Scrying is a very nice upgrade that scales well with older formats. Imagine getting Wasteland or Dark Depths with this in Legacy!

Give Me A Reason Not To

The point of these designs is not to make snow lands unplayable or unseat the new mechanic of the new set before it ever gets off the ground. None of these cards absolutely blow you away if you want to play your snow deck, but they do trip you up a little. They also remove the forced choice of needing to play with snow covered lands if you want to be competitive, while creating a bit of deck-building tension.

But perhaps most important factor is that they remove the soft-ban on cool basic lands!

Postscript: Of course the anti-snow card is previewed right after I submit my article! 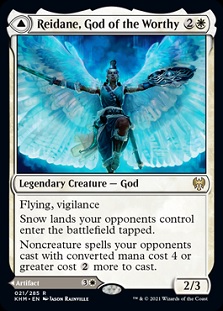 Reidane, God of the Worthy is the first card previewed to negatively impact snowlands, and while it does so in a good way it's not a super playable card in and of itself. The body is meager and it may come down too late to matter or even just get killed. Considering that Thalia, Heretic Cathar only saw minor play and there's no guarantee your opponent is even playing snow lands. This isn't that exciting. It's certainly playable, and the taxing ability has a role, but it's a minor role player. I think this is a bit narrow to dissuade snow lands, especially in older formats; nobody is putting this card in their Modern deck. Even if the back side is a decent hate card, four mana is far too much against combo decks when there are much cheaper options. I'd prefer something closer to the cards I laid out in this article to really make a difference.