Raise Mjölnir if you're worthy, as Kaldheim is here!

We've finally gotten past Standard's dark period, with mistakes like Teferi, Time Raveler, Oko, Thief of Crowns, and Uro, Titan of Nature's Wrath finally behind us, and what has been left has been a fairly exciting and healthy Standard format. And now we get to add a whole bunch of new cards to the mix!

Snow, changelings, and sagas return in a big way, while we've got new modal double faced gods as well as new mechanics like foretell and boast to also mix things up. There are a lot of words on the cards in this set, with many being two cards in one, so there's a lot to take in.

Where else would I start but with the Jace's Ingenuity variant?

With snow duals, snow basics, and Fabled Passage, enabling Graven Lore in a two color control deck should be super easy; and, if you're scrying for three or more Graven Lore is going to give off "end of turn, Fact or Fiction, you lose" vibes. Drawing three cards at the end of your opponent's turn for five mana is fine, but when they're the three right cards, that's just monumental. Graven Lore is close to mega-Dig Through Time in Standard, and there are a ton of great foretell control cards being added to the mix.

Clearly cut from the cloth of Figure of Destiny and Warden of the First Tree, Ascendant Spirit is the Blue entry into "1-drop that levels up as the game goes on" squad. However, it has some issues.

The first of course is that Figure of Destiny was Red or White, the two most aggressive colors that crave powerful 1-drops, while Blue is the color least interested in an aggressive 1-drop. This a huge problem right off the bat, but Ascendant Spirit isn't just Blue, it also requires basically every land you have to be a snow land. This limits it essentially to a Mono-Blue (or very close) snow deck because all your sources need to be able to activate it. That's quite the set of restrictions.

The other major problem is that 2/3 is just smaller than a 3/3. Spending your entire turn two to level up Warden of the First Tree was okay because you were getting a Watchwolf-level threat that was a decent value on turn two. Downgrading this to an Elvish Warrior is a major loss. The second and third levels of Ascendant Spirit are better than Warden of the First Tree and Figure of Destiny, but the floor is a bigger concern than the ceiling.

The last factor is that creatures are just a lot better now than they were when Figure of Destiny was a premier creature. Putting all your eggs into one basket and then losing it to a kill spell for a big tempo loss is a death sentence in Standard right now.

Ascendant Spirit is a fringe card that may see a little play, but on the whole it is very unexciting despite the pedigree.

Love - Battle of Frost and Fire

We get our first taste of multicolored sagas in Kaldheim and there a lot of them! Perhaps the most exciting is epically named Battle of Frost and Fire.

Battle of Frost and Fire reminds me a lot of Elspeth Conquers Death. It's a big, powerful five-mana saga that is amazing in a control deck, providing board control as well as card advantage. Rather than taking out one big target, Battle of Frost and Fire comes equipped with a Storm's Wrath than can have some giant-based benefits as well. Board wipes are always welcome in control decks, but even just killing a single creature or planeswalker is more than fine. There's extra benefit here if you're playing a number of giants in your deck, as it can be closer to a one sided wrath. Then as the chapters go on we get to scry 3, and then most importantly draw two cards and discard a card. That's a lot of value for a five-mana spell, especially one that works so well with Yorion and is already in good control colors.

The issue here is an Eldraine one, in that it does not answer either Lovestruck Beast or Bonecrusher Giant, but the raw power is certainly here. I'm excited for this one.

It's easy to look at Quakebringer and see Sulfuric Vortex, one of the best aggressive Red cards ever printed. However, there's a lot more Spined Wurm here than there is Sulfuric Vortex.

At face value Quakebringer is pretty bad. A 5/4 for five mana with no evasion won't often make the cut in Limited, especially with the anti-life gain clause not mattering much of the time. Foretelling it for two and then four mana isn't much better, as now you're investing 6 mana into a creature that doesn't directly affect the board or generate immediate value.

As such, the only real value is if you can Quakebringer into the graveyard without casting it and then trigger it every turn. Of course, this requires not only a way to put it in your graveyard, but also keeping a giant on the battlefield as well. And once you've jumped through all of these hoops, aligned the stars, and put it all together? You get a glorified Phantom Warrior. Not exactly a big payoff.

Quakebringer is mighty unimpressive. But if you did happen to be looking for a good mythic Red 5-drop, Kaldheim does deliver!

A 4/4 haste dragon for five mana is the gold Standard now when it comes to Red curve toppers and we've got a nice one here in Goldspan Dragon.

Lotus Petals are great and Goldspan Dragon takes this up a notch. One way or another Goldspan Dragon is going to make a treasure token, either by dying before combat or attacking, giving you back two of the five mana you spent to initially cast it. This mana is now free to cast Stomp, or Negate, or whatever other cheap interactive spell you'd like right away. Being able to tap out for a big threat while still having mana available is amazing. And of course, you can always just build up treasure for something else as well.

Think about how good the tempo is when you play a Chandra, Torch of Defiance, +1 to add two Red, and then cast another spell. That's Goldspan Dragon but you also get to attack for four. There's nothing super fancy here, just a very powerful Magic card.

Somebody's playing a prank on me!

Magic is always about more than just big flashy Mythics, as Kaldheim brings us one of the best Blue removal spells printed in a long time in Bind the Monster. This is a really easy one to gloss over, but please understand this:

Bind the Monster is to Capture Sphere as Claim the Firstborn is to Threaten.

Claim the Firstborn has made a huge impact on both Standard and Historic, as once you scale down the effect a bit to get it down to an amazingly cheap one mana, things start to get awesome. Bind the Monster is from the same school of thought and will see play in virtually every single format. Amusingly enough it is probably at its worst in Standard, where the format is dominated by 3-drops, 4-drops, and flashy mythics, but scales back amazingly well as creatures get cheaper and more utility based. Sometimes, you'll just need to cast this on a Lovestruck Beast and suck it up that you took five, but there are many other phenomenal exchanges to be had.

Here's a short list of tier one creatures across various formats that Bind the Monster laughs at:

You get the idea.

If your Blue deck needs to deal with smaller creatures for cheap, Bind the Monster does the job very well. And that's to say nothing of how it plays with Kor Spiritdancer in Historic!

Immersturm Predator is a decent sized 4-drop that has no effect on the board the turn it enters the battlefield (unless you're dying to sacrifice something or remove a card from a graveyard). It's not particularly aggressive, nor is it particularly stabilizing. It can protect itself, but the cost is high, and it requires a deck built around it for not much payoff. Furthermore, if your board is empty and you're behind, it's actually just Phantom Monster.

There just isn't much to like here. Sure, Vampire Dragon sounds cool, but Immersturm Predator won't be doing much more than dominating games of Limited.

There's obviously a cost here, namely playing only snow lands, but if you're Mono-Green you're basically doing that anyway, and the upside is monumental. Blessing of Frost offers you four hasted power added to the board, done so in whatever way makes blocking most difficult for your opponent, and should easily draw you at least two cards as well. Late in the game the ceiling really lifts here, as it can draw far more than that.

This is the perfect curve topper for any aggressive deck that can cast it. Alongside Blizzard Brawl, there's already a strong pull for snow in just Green, while snow duals and Fabled Passage can also facilitate some sort of splash as well.

I'm extremely excited to get to work with Blessing of Frost as I think it's one of the biggest sleepers in the set.

There's a lot of exciting stuff happening in Kaldheim, but there's also a ton of words on these cards too! The Gods in particular are pretty obtuse, as we've never really played with cards like them before and they just do a ton of things. I'm pretty positive Cosima, God of the Voyage / The Omenkeel is insane, but I haven't finished reading it yet so I'll have to get back to you on that one. 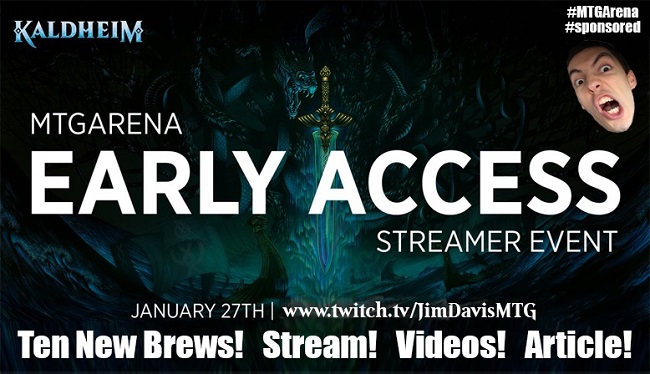 The good news is that playing with the cards answers all questions, which is exactly what I'll get to do next Wednesday the 27th for the MTG Arena Early Access Stream! As always, I'll be playing my Ten New Brews all live on stream, which will also end up on my YouTube, and my Friday article next week here on CoolStuffInc.com will go over every single decklist as I assess its results and future prospects!