Modern Horizons 1, despite a few overly pushed outliers, was one of the most exciting Magic sets of all time. It was an all-time great Limited format that was very powerful, while also presenting perhaps the largest density of new and playable cards for various formats ever seen in a single set. There was something for pretty much everyone, with major changes happening in the Modern format as a result.

Modern Horizons 2 is a chance to continue that success, with the lessons learned about those few outliers and so far, it looks like it is going to deliver. One of the coolest things about a set like this is that is that because there is something for everyone, most players leave happy.

Well, if you know me, you know I love goblins, and there are some huge Goblin-themed cards previewed so far! Today we're going to take a look at three of them, seeing where they fit in and what new ideas they may spawn in Modern!

Patriarch's Bidding is a classic "boomer" Magic card, that was absolutely devastating back in the day in Standard and Block Constructed and also saw significant play in Extended (essentially Modern of the time period), but has since faded into obscurity in the last decade as it wasn't nearly powerful enough to keep up in Legacy.

Of course, part of the power of Goblin Bidding was that the Goblin cards themselves were all very good, but it was also one of the best decks for Patriarch's Bidding because of how well the Goblin cards synergized with dying and coming back. With multiple sacrifice outlets including Skirk Prospector, it wasn't hard to sacrifice your board for some amount of value, and then get all your goblins back at once. Furthermore, the haste on Goblin Warchief allowed for Patriarch's Bidding to be immediately impactful, allowing your new massive board to attack immediately before any reprisal from your opponent. Topping it off was Siege-Gang Commander and Goblin Sharpshooter, which could decimate your opponent's board.

With Goblins already a very real player in Modern, this gives the deck a brand-new angle to play for. In any sort of fair or grindy matchup, casting Patriarch's Bidding should be game over, and cards like Sling-Gang Lieutenant further the idea of one-shotting your opponent after a big Patriarch's Bidding.

Will it be the primary goal of Goblin decks in Modern? Probably not, but it offers a very unique and powerful effect that will be backbreaking in certain matchups.

I called it again!

While not strictly a Goblin card, Goblin Bombardment is an awesome addition to Modern.

A major factor in both Standard and Historic, sacrifice decks haven't really had much success in Modern because they care a lot about the board and many Modern decks like Tron, Amulet Titan, or other go big/combo decks can safely ignore the small advantages that a sacrifice deck would want to make.

However, that's not to say that they don't have legs.

This was a deck I brewed up and play on a video a while back and was surprisingly impressed with. It featured enough early aggression to pressure the non-interactive decks, while having phenomenal game against any creature deck between Mayhem Devil and Claim the Firstborn.

Goblin Bombardment would fit perfectly into a deck like this.

Goblin Bombardment helps to fill the role that Mayhem Devil accomplishes alongside a sacrifice outlet, but does it all by itself rather than needing to put everything together. It's also a very difficult to remove card type, fulfilling a similar role of Greater Gargadon as a durable sacrifice outlet. This is important for both cards like Claim the Firstborn which require a sacrifice outlet to be good, as well as protecting your recursive creatures like Bloodghast from cards like Anger of the Gods or Path to Exile.

We've seen this before in Legacy which offers a pretty good idea of what these decks might look like, as crossing something like this with my above Rakdos Sacrifice deck is a great place to start.

Goblin Bombardment feels like the perfect Modern Horizons reprint; it's powerful and exciting, but in a deck-building puzzle way rather than a pure rate way. Not every deck is going to want it, but the decks that do want it will really want it.

Okay enough of the reprints, how about a new card? 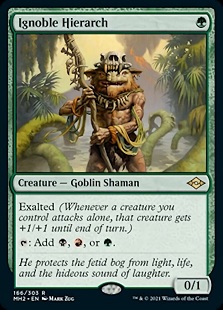 Wow is that one out of left field!

Noble Hierarch is arguably the best mana creature of all time and a staple in every format that it is legal in, so getting essentially another one is absolutely huge.

Aside - It's not that big of a deal, but it really bothers me that this card has exalted. As it feels like it is a "reverse-mirror image" kind of homage to Noble Hierarch, it seems odd to reverse mirror the creature type and Bant to Jund mana, but maintain the very Bant feeling keyword. Something like battlecry or some other "go wide" type ability feels like it would have been a much more fitting and flavorful addition, showing the difference between a regal Human Druid and a rough Goblin.

Of course, Ignoble Hierarch making Black and Red mana is a big difference from Noble Hierarch, presenting it as an option for different colored decks. Something like Liliana of the Veil, which would never play well with Noble Hierarch, looks awful nice on turn two off of an Ignoble Hierarch. It's also much better friends with Bloodbraid Elf and Lightning Bolt, although it remains to be seen if a more tradition Jund deck wants a pure mana creature.

What's also interesting about Ignoble Hierarch however is its creature type.

I'm sorry, is that a green goblin?

There have been two Mono-Green Goblins in Magic's history and while neither of them had any impact on Constructed formats, Ignoble Hierach will certainly be bucking that trend.

The question is, what to do with it?

Another good 1-drop is exactly what Goblins really wanted in Modern, to supplement Aether Vial and both supplement and partially supplant Skirk Prospector. Ignoble Hierarch plays wonderfully with Munitions Expert, Goblin Warchief, and the various mana intensive things that Goblins normally wants to be doing. It could also help open up new doors to potential things like Collected Company or maybe even Grumgully combo stuff.

The best part of Modern Horizons is the sheer volume of awesome cards to think about and build around. We've already spent a complete article talking about only three cards, and there's not only more we could have said about each card but also hundreds of other cards worth talking about.

So far, even with less than half the set previewed, Modern Horizons 2 looks to be a fantastic hit. If they can avoid the few Arcum's Astrolabe, Hogaak, and Wrenn and Six level misses, we could have an all-time great set on our hands that will take years to fully test out and understand.