Wizards of the Coast dropped an absolute bombshell on us at the start of this week, making surprise sweeping changes to the Standard and Pioneer formats: 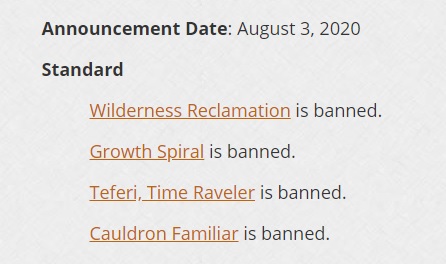 There's no surgical precision here. Standard has been increasingly stale over the last few months and they have decided to just drop the hammer, not only taking out the key card in the universally accepted best deck in Wilderness Reclamation, but also hitting key cards in the other top archetypes as well.

Teferi, Time Raveler was starting to look like he was doing to dodge any intervention and make it all the way to rotation, but the most complained about card in recent memory is finally sent to the shadow realm. Growth Spiral headlined one of the best Ramp packages Standard has seem in years, but now gets to watch Uro and company from the bench. And perhaps the most surprising, the innocent looking Cauldron Familiar also gets to take a seat in a great example of foresight. The Cat-Oven core is an absolute nightmare for any creature deck, and despite matching up poorly against the Reclamation and Ramp decks that dominated the format it still had its place among the top decks. Once you remove those elements the deck would have likely been oppressive, and that's on top of it just having many annoying and repetitive play patterns.

So, the big question becomes, "now what?"

We've got essentially a brand new format to play with for the next month or two before rotation, which gives us another puzzle to solve. And with current design philosophy putting a lot of Standard's power level into individual cards, it would behoove us to figure out what cards are next in line now that the top tier is gone.

Today we're going to look at the new class of "best cards in Standard" that will undoubtedly shape the format for the remainder of its existence.

Just because Agent of Treachery is banned doesn't mean that Winota, Joiner of Forces isn't still a premier curve topper in aggressive strategies.

Aggro in this Standard format is more defined by having some sort of big finisher than more normal beat downs, and playing Winota for two or three triggers on turn four certainly qualifies. Winota offers a fine rate coupled with tempo and card advantage, and all she asks is that you build your deck a little weird and play Boros.

She was also seeing a lot of success before the bannings anyway, as Micheal Jacob took her to the Top 8 of the Player's Tour Finals recently and I won the GenCon MTG Arena Championship last weekend with a slightly updated list:

With cards like Venerated Loxodon and Judith, the Scourge Diva already providing a lot of explosive power, Winota is the card that puts this motley crew of creatures over the top. Whether it's Mardu, some version of PawBlade, or something else entirely, Winota stands to be a major player in Standard going forward.

Speaking of big Aggro finishers, Embercleave is perhaps the biggest of the bunch. Mono-Red Aggro was another deck that was already seeing play in the prior format and loses nothing. In fact, it stands to gain a lot.

Teferi, Time Raveler was surprisingly good against Emblercleave, not allowing its caster to play it during combat while also allowing sorcery speed sweepers to be played in response, but the real gain is likely to be the relegation of Aether Gust back to deck's sideboards. Decks having a maindeck Terminate/Shatter split card made life very difficult for Embercleave decks and this is likely to not be the case going forward.

Questing Beast stands to gain value too, meaning Embercleave will likely be retaking its place as one of the best and most dangerous cards in the format. It may be Mono-Red, it may be Gruul, or it may be something else entirely, but it's time once again to fear the Cleave.

While he has lost many of his best friends, the ubiquitous Uro, Titan of Nature's Wrath still rears his ugly head in Standard. He is going to have to find new crews to roll with, but realistically this is not going to be difficult.

Uro remains one of the most powerful cards in the format, as well as perhaps one of the most complete threats ever printed. Uro does actual everything, meaning it will still find a place in Ramp, Midrange, and Control decks. All Uro requires is that you have Blue and Green mana sources in your deck and that you want to play Magic and put cards in your graveyard.

Uro is still going to be the best threat in the format, so you're going to either need to play him or have a plan for beating him.

When Core Set 2021 arrived, much of the talk was centered around the surprise reprinting of one of the best top end threats ever printed. Ugin, the Spirit Dragon looked poised to be the new ultimate endgame in Standard, but there was just one problem: Ugin did almost nothing against the Wilderness Reclamation decks.

Reclamation decks rarely had anything in play and operated almost entirely at instant speed, making the eight-mana sorcery speed threat look worthless. You'd cast Ugin and they would just counter it, or ignore it and fireball you for 20 with Expansion // Explosion.

However now the combo finish has left the format, and a cursory glance at all the cards we've looked at so far shows a pretty big weakness to a quick Ugin. Growth Spiral is gone which is a huge loss, but there are still other ramp effects in Standard to fill the void.

We may be seeing a return to glory for Ugin!

While it felt like Absorb and other non-Mystical Dispute, non-Dovin's Veto counterspells were basically soft-banned for the last year or so because of Teferi, Time Raveler, they now have room to play once again. Absorb is quite good against both Embercleave and Ugin, and Azorius certainly has the tools for a very solid control shell. After all, Shatter the Sky and Elspeth Conquers Death are still legal, as well as Yorion and friends.

Azorius Control was the first "best deck" in this format, comprising a large portion of the Dreamhack Anaheim field when I played in that event, and it no doubt has the legs to make serious moves going forward. Teferi, Time Raveler was obviously a good card in the deck, but ultimately it was probably better against it than in it.

Nissa, Who Shakes the World had been considered the best card in Standard for considerable stretches since her printing, and while she had fallen by the wayside a bit she stands to come roaring back to viability.

Remember, while Growth Spiral may be gone, Hydroid Krasis is not, and that one-two punch has been a defining feature of Standard that has given ramp decks purpose and control decks fits. That's to say nothing of how easy Nissa makes casting Ugin as well. Arboreal Grazer is still legal, as well as Paradise Druid and Wolfwillow Haven, so there are plenty of ways to cast Nissa ahead of schedule. Untapping a Breeding Pool or Triome to attack for three but also have a two mana interactive spell like Negate or Eliminate available to bridge the gap to untapping with Nissa is still likely as powerful as ever.

I see no reason why Nissa won't retake her throne as one of the best cards in Standard.

Our last card is an easy one to forget, but alongside Lucky Clover actually took down the previously mentioned Dreamhack Anaheim tournament.

Edgewall Innkeeper is a phenomenally powerful card draw engine for a very low cost, that has seen play in a number of different adventure decks over the corse of its legality, ranging from the more combo-esque Temur Adventures, to the Embercleave focused Gruul adventures, to more esoteric Selesnya and Golgari Adventures decks.

Many of the adventure creatures are already phenomenal on their own, so adding in this sort of cheap card draw element at such a low cost is a very worthy thing to build around. Edgewall Innkeeper may have faded into relative obscurity in recent months, but is still here and ready to roll in this new format.

The Grass Is Always Greener

Just because Teferi is gone doesn't mean you're not going to get Embercleaved, Ugined, and Hydroid Krasis for 10 off of Nissa over and over again in the new format.

But it does mean we have a new and hopefully healthier format to play in, and it's on us to figure out what those new "best" cards are going to be so we can get to work finding the best ways to use them... or the best ways to beat them.