Mana is everything in constructed Magic.

What lands are legal in a format is perhaps the most important defining characteristic of that format. Sure, it may be hard to explain to a newer player why a Scalding Tarn costs more than a Jace, the Mind Sculptor or a Questing Beast, but the reality is that it doesn't matter how cool your spells are if you can't cast them.

However, there is a balance that needs to be maintained. If it is too easy to get the colors you want, the lines between colors start to blur and each color's weaknesses melt away. We've certainly seen both sides of this across the many formats over the years, from formats where playing all five colors was far too easy to formats where you basically had to play either Green or a mono colored deck to have a functional mana base.

Older formats like Modern and Legacy already exist in the grip of fetchlands, which give decks almost completely unimpeded access to whatever colors they want, so as such there's not much to discuss there. The concern today is Standard, where Wizards of the Coast is completely obsessed with printing tap lands.

With fetchlands dominating the older formats, rarely are people considering playing Temple of Plenty or Seaside Citadel in Modern. However, these lands often define Standard, which runs a slower pace than the more powerful formats. Standard is also the haven of midrange decks that don't mind taking turn one off to cast their powerful midgame rares and mythics.

But the problem is that taplands are very limiting. They play very well in midrange and control decks, while being a real hinderance to aggressive or synergy decks. If your most important turns are the first few, it doesn't take much for a tapland to throw you totally off curve. When this happens, it becomes more difficult to gain the consistency your aggressive or synergy deck needs to overcome the more powerful midrange mythics.

This is a problem, because Standard is already heavily skewed towards midrange and "good stuff" decks.

Whatever the busted four of 5-drop is at the moment, Standard tends to revolve around it. This is just the nature of a lower powered format, as players have time to cast their spells so playing really powerful ones just makes sense. Planeswalkers, mythic rares... it's all fair game. Throw in some removal spells and maybe some ramp and it's hard to go wrong. Midrange goodstuff decks love tap lands. They don't want to do anything on turn one anyway, while scry lands, cycling lands, or creature lands help to mitigate flood and smooth out their draws.

The problem is, why are we printing lands that are the best in decks that already tend to do the best?

Taplands are a huge problem when you are trying to build an aggressive deck or a deck that cares about assembling synergy pieces early. While the midrange deck gets to catch back up on an awkward tapland draw with it's crazy good 4-drop, aggressive decks don't always have that luxury. Instead they need to decide if they are even willing to play taplands or try to just run well with basic lands.

Forcing aggro decks to play mana bases like this:

No Turn One Lands

A class up from taplands are the lands that often come in untapped, but can't make mana on turn one.

The checkland cycle of Rootbound Crag on friends typically plays well, getting around the tapland issue while encouraging two color decks in formats without multityped lands (like Stomping Ground). However, in addition to dual typed lands, checklands can make mana a bit too easy. The shockland plus checkland mana bases of both recent Ravnica Standard formats made three color decks a bit too smooth, and while fun it probably isn't something that should be always around.

Other non-taplands like Cinder Glade and Graven Cairns are interesting in that they can help curve out on later turns, but still can't play a 1-drop on turn one. The filterlands are particularly awkward for aggro and synergy decks because of how poorly they play with one mana spells.

Which leads us to the lands that can actually cast a 1-drop on turn one.

There's no doubt that the original Ravnica shocklands are perhaps the most balanced and elegant land cycle ever printed. Usable on turn one, never stops you from curving out, but with a life payment that is balanced and an enters tapped backup plan. The problem is that you can only play four shocklands, and four shocklands and basic lands isn't a competitive mana base.

Painlands like Brushland were once the gold standard for Standard dual lands, being featured in many core sets throughout Magic's history. However, they were phased out for many of the above other options. While they aren't the most elegant, painlands get the job done of being able to tap for two colors of mana on turn one for a balanced cost.

Which brings us to our main point, the fastlands. Copperline Gorge and friends are one of the few land cycles designed to actually cast spells well in the early turns of the game, while also being actively worse in midrange and control decks. While every

deck wants to play Stomping Ground, not every one wants to play the full amount of Copperline Gorge if presented with other options.

This is good dual land design.

The scryland cycle are great lands for Standard, because not every deck in the format wants to play them. This creates a deck-building choice - how many tap lands am I willing to play? This is a good deck-building question to need to answer. The issue is that there is no choice for the other side. Much like aggressive decks don't want to play scrylands, control decks aren't going to want to play too many fastlands.

Players need access to both sides of the coin. Because tap lands are so easy to design (as evidenced by there being so many different ones over the years), having the ten fastlands be in every core set would help to solve this problem. It would allow lower to the ground aggressive and synergy strategies more room to breathe, without giving the midrange and control decks too much good mana fixing.

Just printing fastlands in each core set is the easy option, but the other way to go about it is just to be more creative when it comes to printing dual lands for Standard. 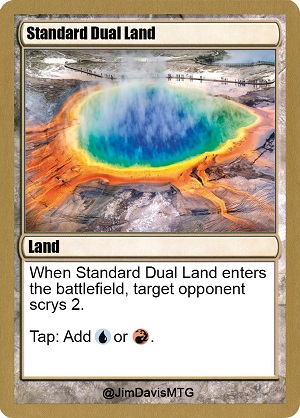 Is this land too good? Too bad? Honestly, I'm not sure, but it aims to fulfill the purpose of having dual lands that are available on turn one and are much better in early game decks than midrange and late game decks. It also discourages players from trying to play too many colors as playing too many lands like this will really start to add up.

Design needs to be more creative with drawbacks beyond just defaulting to "enters the battlefield tapped."

Think about how frustrating it is for a deck like this to have to play with taplands:

This deck would kill for a Spirebluff Canal!

Aggressive and synergy-based decks already have it hard in Standard because the power level of the good cards is so high. Let's give them a fighting chance by at least letting them cast their spells on curve.

The easy route is simply to have fastlands in each Core Set to go along with whatever tapland ends up in the main sets, but designing new duals that are usable on turn one is also acceptable. However you want to go about it, the goal is to allow us to build workable mana bases in Standard that can cast spells starting on turn one and working up the curve.

Once we get there, I'll start campaigning to put Horizon Canopy lands in Standard too!