Our second return to Zendikar is imminent, as we will once again be visiting the land of allies and floating landmasses that was ravaged by the Eldrazi and saved by the Gatewatch. The original Zendikar was a landmark Magic set that gave us many iconic cards like Jace, the Mind Sculptor and Stoneforge Mystic, as well as the enemy fetchlands and full art basics. While the followup didn't do as well, we return to a land of landfall and more with a few familiar faces - Jace and Nahiri.

Our first two Zendikar previews, Jace, Mirror Mage and Nahiri, Heir of the Ancients, are going to be difficult to evaluate. As we have seen zero other Zendikar Rising cards, we don't have much context to go off of. Mythic Planeswalkers are also notorious difficult to evaluate, especially when they contain abilities we have never seen before, which both do.

However, that's not going to stop us from trying! 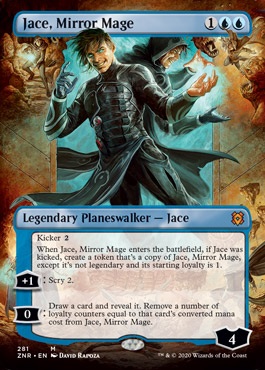 Whoa that's a lot to unpack.

As a three mana planeswalker, Jace, Mirror Mage should already have your attention. Three mana planeswalkers have historically made serious waves across all tournament formats, from the original Jace Belren to the "should be banned in all formats" Oko, Thief of Crowns.

Three mana planeswalkers come down early enough that your opponent may not be adequately prepared to deal with them, or can come down on turn four or five alongside an interactive spell allowing for a powerful double spell turn. While not all 3 mana planeswalkers are great, it's a great start.

We've never seen kicker on a planeswalker before, while only one planeswalker has had a variable cost in the history of the game - the enigmatic Nissa, Steward of Elements. Nissa has a lot in common with Jace, but was a bit underpowered and saw minor play when she was legal in Standard. Having a second option for your Jace, and a powerful one at that, gives Jace a large amount of flexibility. However, let's examine the base level model of Jace before we start with the add-ons.

Three mana gets you a planeswalker with 4 starting loyalty, a solid amount, and two abilities:

Scrying is good, but not great. It's a nice way to add loyalty to Jace in a pinch, but doesn't give you any immediate returns. turn three on the play, Jace may come down early enough to not need to make an immediate impact, but on later turns the scry is only going to feel medium. It's an okay start, but nothing to write home about. Scrying feels a bit like lifegain; great when tacked onto other effects, but bland as a main course.

0: Draw a card and reveal it. Remove a number of loyalty counters equal to that card's converted mana cost from Jace, Mirror Mage.

Jace has no written minus ability, but his zero ability will often play as such. Similar to Sarkhan the Mad or Dark Confidant, Jace draws cards as a danger to himself. If you draw the "right" cards like lands or cheap spells, then that danger is minimal. If you hit a spell that costs 4 or more and kill your Jace, you're not going to be super happy with your investment.

Of course you can use Jace's +1 ability to try and set up your top card for the following turn, but that is rather slow and has Jace only drawing a card every other turn and not doing much else. Skewing your deck toward cheaper spells and/or using effects like scrylands or other library manipulation looks like a much more direct and powerful path. If you can have Jace drawing you an extra card almost every turn while sticking around, that's amazing value for a 3 mana planeswalker.

Jace can't protect himself, but he's cheap and powerful enough to be a very nice engine that may not need to. But of course, we can't forget about that kicker cost.

Five mana Jace is quite a bit different from 3 mana Jace. While 3 mana is a great spot for planeswalkers, 5 mana asks a lot more, especially if it can't defend itself. However, this is not the default but an optional bonus, making the modality very welcome and useful.

Paying 5 mana for Jace gives you an additional copy of Jace, Mirror Mage, albeit one with only one starting loyalty. So now you have two Jace that work together exceedingly well. One can scry while the other draws, creating an almost guaranteed draw engine. This also means that your opponent will need to deal with two planeswalkers rather than one, splitting up attacks and making defense much easier for you. With only a +1 and a 0 ability, even a 1 mana planeswalker is still very valuable.

There's just one downside here - your opponent will gain priority as the trigger creates the copy, making your planeswalker vulnerable to instant speed removal before you get to activate any loyalty abilities. This means if you kick Jace, your opponent can Eliminate the original copy of Jace before the trigger to create the copy resolves. You still make out with a two for one in this exchange, but it will greatly reduce the value of your 5 mana spell.

All in all Jace feels powerful, interesting, and most importantly requires both deck-building and gameplay savvy to use properly. Nothing overpowered, but a very good tool to have access to in Standard. At a glance Jace appears to be about as powerful as Teferi, Master of Time, meaning he will have a serious place in Standard. 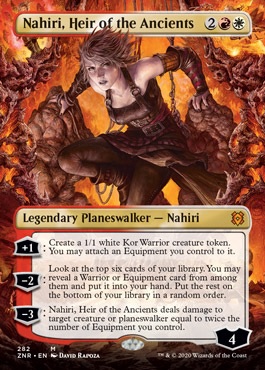 While Jace is interesting because of the many ways you can use him, Nahiri, Heir of the Ancients is much more of a "deck-building planeswalker." If you don't have a good amount of equipment and/or warriors in your deck, Nahiri doesn't really do much. If you do however, she manages to check off all three boxes of protecting herself, creating card advantage, and killing things.

Four mana for 4 starting Loyalty is pretty average for a planeswalker these days, so let's take a look at her abilities:

+1: Create a 1/1 white Kor Warrior creature token. You may attach an equipment you control to it.

+1 loyalty to make a 1/1 token is a very common planeswalker ability, allowing Nahiri to both defend herself with chump blockers as well as make an eventual army of threats if given time. However, there's a bit more going on here too with the equipment attach clause. This of course requires you to have an equipment already on the battlefield, but essentially adds mana to your mana pool equal to the equip cost of the equipment, which could be a solid amount of value. This can be used for gimmicks like Colossus Hammer, but that isn't likely for Standard.

-2: Look at the top six cards of your library. You may reveal a Warrior or Equipment card from among them and put it into your hand. Put the rest on the bottom of your library in a random order.

A plus ability to protect itself and a minus ability to draw cards, again fairly normal stuff barring the deck-building restriction. Nahiri can only draw you a warrior or equipment card, which again makes this a powerful but limited ability. If your deck is full of warriors and equipment, -2 to draw a spell is a fantastic ability to have on a durable planeswalker.

-3: Nahiri, Heir of the Ancients deals damage to target creature or planeswalker equal to twice the number of Equipment you control.

Plus to protect, minus to draw cards... all pretty normal planeswalker stuff. Normally we'd get to the ultimate ability here which would be some large amount of loyalty to put you in a very advantageous situation. But no! Instead we get a third actual ability, bringing Nahiri more in like with four ability planeswalkers like Chandra, Torch of Defiance and Jace, the Mind Sculptor.

Nahiri's third ability is just direct removal for creatures and planeswalkers, assuming of course you have the requisite number of equipment in play. With one equipment in play this ability is passable, with two it's great and any more than that is excellent.

With the full range of 3 powerful abilities, Nahiri is actually a very powerful planeswalker, but she of course comes with her own issues.

There are basically two playable equipment currently legal in Standard. Embercleave is one of the best cards in the format and doesn't need a ton of help, while Shadowspear is actually a very solid card that just doesn't really have a home or purpose. Beyond that there is a small equipment subtheme in knights, headed up by the underrated Steelclaw Lance and furthered by Fervent Champion and Acclaimed Contender.

There aren't many Warriors currently in Standard, but the ones there are do line up with the Boros colors of Nahiri. PawBlade was a deck for a little while when Core Set 2021 was released, utilizing Seasoned Hallowblade, Alpine Houndmaster, Winota, Joiner of Forces, and Embercleave that could be a natural early fit for Nahiri. Unfortunately, there isn't much knight/warrior crossover.

Of course, we still have the rest of Zendikar Rising to see as well, which will assumedly contain a good number of equipment and warriors for Nahiri to play with. Considering that PawBlade is already a fringe playable deck in Standard that Nahiri slots into pretty easily, when the full reinforcements come in from Zendikar Rising it would not be surprising to see Nahiri as one of the better cards in the set.

The best part about Jace and Nahiri is that they are both fairly dynamic and interesting planeswalkers, both from gameplay and deck-building elements. Planeswalkers like Teferi, Time Raveler or Chandra, Torch of Defiance don't really ask that much of you, they're both just really, really good; you put them in your deck and you get paid off. And that's to say nothing of the dozens of "5 mana, 5 loyalty, +1 to draw, -3 to defend, -8 to win" cookie cutter planeswalker designs that are very played out at this point.

Planeswalkers should be powerful but interesting. They should require some work to put into your deck, while not working uniformly for everyone. This way they are never ubiquitous, but help decks to achieve the goals they set out for in deck-building.

So far, Zendikar Rising is off to a good start!