It's the Monday after.

Pro Tour Guilds of Ravnica was this weekend and Standard is back! There is of course a lead time on these videos, so this video was recorded on the Thursday before the Pro Tour and it showcases a pretty sweet midrange deck I've been working on. The deck mixes many of the great black midrange elements with the best red has to offer in Lava Coil, Rekindling Phoenix, and the very underrated Siege-Gang Commander.

The result is a deck full of powerful cards and light synergies that has the tools to handle almost anything.

We went X-Grixis, with our only two losses coming to Grixis Midrange decks which seems to be a very poor matchup. Thankfully my predictions about Grixis being an almost non-factor in the format have come to fruition, as the deck has been almost completely absent from Pro Tour coverage. With Grixis out of the picture and aggressive white decks the order of the day, Rakdos Midrange starts looking even better.

The deck will need to be adjusted a bit to tailor itself to the onslaught of aggressive white decks, but there are plenty of tools available in both red and black to provide the necessary answers. Golden Demise in particular is excellent against both Adanto Vanguard and History of Benalia, while giving you a real edge when you can get the City's Blessing with the aid of Siege-Gang Commander. Knight of Malice is another possible choice, although it doesn't play great with Golden Demise. 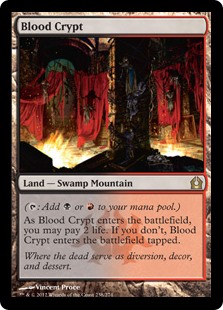 Blood Crypt? Who needs it!

Lastly, being an "off-guild" deck means we've got tons of room for improvement too once Ravnica Allegiance comes out and brings the entire Rakdos guild with it. It's no surprise that most of the format's decks are currently based around the guilds in Guilds of Ravnica, and once this deck gets to add in all of the new Rakdos goodies on the way it's likely to go from good to great really fast.

It's also a blast to play... Siege-Gang Commander forever!