When we think about building a deck in Commander, we have to answer one key question the moment we start to ponder the deck.

How much do I care about the Commander?

When I look at a Commander like today's, I can't help but want to use it, and use it a lot. I mean, if we just want to build Mono-Blue, surely there are better options. Nope, for this guy, we want to play into it. 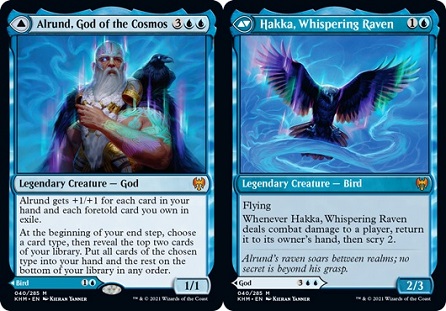 Believe it or not, I've actually built this deck before - long before. Way back, when I first started writing about Commander in 2014. The goal back then was to draw enough cards to hit with the Commander - who, like today's, was the size of our hand - and kill an opponent. That goal will be the same today, but boy, have the tools improved in seven years!

One of the easiest things to do in Commander, at least when we have Blue in the color identity, is draw cards. There are a million spells which say something like "draw two cards" on them. And that's fine, really, but to get our hand over 21 cards, we're going to need to do better. We want to draw massive slabs of cards, to the point we have no problem playing our lands and our mana rocks and know we'll still have a lot of cards in our hand. To do this, we need to rethink how we draw cards.

The first key is to draw more than one or two, of course! Consider a spell like Interpret the Signs. With our deck, the spell we turn over is likely to have a casting cost of four or more, so normally we'll get four cards for our single spell and four mana. That's a good deal. Recurring Insight is another great one, because if there's another Blue mage at the table, they're likely to have a good number of cards, and they probably won't be able to dump them all by next turn. We could easily draw 10 cards or more with this single spell and our six mana. Sea Gate Restoration doubles our hand size (plus one!), so if we have 10 cards, Alrund becomes one-hit lethal with that single spell. Myojin of Seeing Winds can remove its divinity counter to draw cards equal to the number of permanents we control. That includes lands. That should be a lot.

Then there's stuff like Mind Unbound, which slowly builds up till it's drawing a critical mass every turn. It's often quiet enough it doesn't draw any hate, but if it lasts three turns we'll have drawn six cards for our six mana. Four and we've drawn 10, and five and we'll have 15 cards. All worth it.

The second thing to look for is repeatability. We don't want to draw two cards right now, we want to draw one or two right now, and one or two again next turn, for as long as we can. Consider Archivist. We get a four-mana 1/1, but we can tap it every turn for an extra card. Sea Gate Loremaster cares about how many Allies we control (which will always be no more than one), but we can tap it every turn. Riptide Director makes us pay four mana and tap it, but we draw equal to Wizards we control. We have eight in the deck, which isn't a lot, but occasionally we might get two or even three cards for our trouble. Azami, Lady of Scrolls is similar; often she'll just tap to draw one, but sometimes we'll have other options.

The really good options are the ones that don't tap. Azure Mage and it's big/little brother, Spectral Sailor are both sort of the classic examples of this. Four mana, draw a card. If you have four more mana, draw another card. Sphinx of Magosi is probably the best for this, but we have several.

We have a few ways to not have a maximum hand size. The classic is Reliquary Tower, but there are plenty more. Back when I built Soramaro, there were five. There are more now. We should have no problems finding one.

There are also a good number of creatures and effects that care about card drawing. We have a number of creatures whose power and toughness are directly related to the number of cards in our hand. We've also got cards that get counters whenever we draw cards. Toothy, Imaginary Friend does amazing things in this deck, growing as we draw then drawing should it get killed.

Finally, we do have a few Foretell spells, just because Alrund likes them, but it's not worth jamming them just because they're there. Better to run the ones that have value and save the rest of the spots for more card draw.

If you draw Azure Mage, play it and draw with it until it dies or you've won the game. Just because you draw Sphinx of Magosi doesn't mean you should play it, even though you'd get X more cards because the draw is cheaper. We really don't want more than one repeatable source of card draw at a time, because we want them available to play every time one of them gets removed. Additionally, once a repeatable source is on the table, hold the big draw spells for one of two things; death of the repeater and no repeater in hand or if you play it, you'll be able to kill an opponent with Alrund.

This doesn't mean you shouldn't respond with a spell if needed. Overwhelming Intellect is nice because it draws cards when it counters something, but still, if countering a one-mana spell is necessary to keep the game going, do it. There are a lot of ways to draw cards here, and you shouldn't run out.

First, there's plenty of ramp in this deck, and my normal 40 lands. These spells are expensive, plus there are several with X in their casting costs, and if we have Azure Mage out it'd be nice to have 12 mana to draw three cards. We want the mana. However, don't be shy about cracking the Dreamstone Hedron if it makes Alrund big enough to kill an opponent.

Second, this deck is horribly light on any sort of interaction. There's a little, but it's mostly incidental, tacked on to card draw spells or marginally-useful Foretell cards. That's fine. Sometimes glaring weakness makes a deck more fun. Can you politick your way out of getting killed? Keep your head down until you're a really lethal threat? However, if you want the deck to be a bit more competitive, it's probably worth spending some time figuring out what sections are too big, making some cuts, and adding a Cyclonic Rift or Whelming Wave. Silent Arbiter is probably worth considering, as is Crawlspace.

Third, there are only two ways to force Alrund through. Rogue's Passage is the best one, but Mu Yanling is no slouch. However, that's another thing worth looking at - consider Trailblazer's Boots or Whispersilk Cloak.

Blue Sun's Zenith isn't here, and it's possible it would be better than Folio of Fancies. The Folio is repeatable in a way the Zenith isn't, but the Zenith doesn't help our opponents. What do you think? Is there another way to look at this deck? What would you change? Let us know in the comments!