If you've spent any amount of time on the internet, you've been exposed to all manner of memes. Most of the time you get it and run with it, but there's certainly plenty more times where you have no clue what's going on. In nerd circles, though, memes can get extremely niche and you may find yourself stumbling onto memes that you don't quite understand but can't help but love. That was me when I discovered the tale of Sir Bearington. 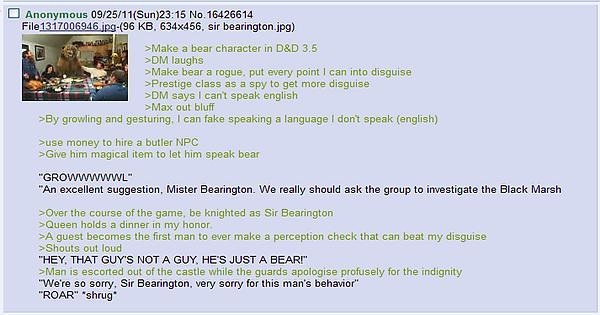 Sir Bearington is an old greentext meme about a game of Dungeons & Dragons where someone makes a character who is a bear that acts like a human. It's hilarious and has stuck with me for many years since I first came across it. Now I've talked about it at length in a number of articles over the last year or so, but I'm hardly a fan of D&D. I've played a little of it, but don't have the level of knowledge of the game or the skills to play - or act - it well. Yet still, this little story was so funny and amusing it stuck with me for a long time and I lovingly reference it frequently. So you can imagine that when we got a legendary bear in a D&D set for Magic, I had to make a deck around him, as I couldn't get this classic meme out of my head whenever I'd see him..

Wilson, Refined Grizzly is just everything you want out of a legendary bear. He's a Grizzly Bears but with a ton of sweet keywords and he can utilize a background. What's not to love about that? You can pump him up and find all kinds of cool new ways to really push him to the limits, or use backgrounds to find some other cool new effects. Let's see a list and see how I put it together:

When building this deck, I basically just knew that I wanted to play with Wilson. I just wanted to play with this cool Grizzly Bears on steroids and I figured I'd sort out the background later. Once they were all previewed, I went back and had a look through them and was somewhat surprised to find a number of very good options. Tavern Brawler and Dragon Cultist both seemed like very interesting options, but I wasn't really in the mood to work with a Gruul list. Similarly, cards like Master Chef and Raised by Giants would also be great with such a tremendous French vanilla card, but I didn't want to run with a mono-colored list. I looked at cards like Clan Crafter, Criminal Past, Agent of the Shadow Thief, and Flaming Fist for some fairly diverse options.

I did give some more consideration to backgrounds that could make him a bit more rogue-like as well. None of these makes Wilson into a rogue so it's about how close you can get. Ultimately, though, the only one that I thought really came close to nailing that feel was Shameless Charlatan. While I think this can be a pretty neat way to build what's basically a French vanilla commander, I also think it's a little dull. Changing Wilson into another creature removes all the keyword nonsense that makes him so appealing in the first place. What's more, there isn't a lot to go off of for that theme. At that point you, what, run a bunch of generic Simic value cards and clone effects? That's boring.

Ultimately, I settled on Cultist of the Absolute for both working nicely with Wilson's solo play but also incentivizing playing additional creatures. This gives Wilson new keywords he didn't already have and increases the rate for his ward ability. The tradeoff is that you need to sacrifice creatures, but utilizing cards like Bloodghast, that's not really an issue. What's more, if there's one thing Green is known for, it's making a ton of tokens - to the point I even considered using the Inspiring Leader background just because I enjoy making tokens that much. Here, though, there's no shortage of ways to make tokens, which makes the drawback of the deck's background far less of a downside.

What I especially liked about building this deck is that while it clearly plays on some typical strategies it does them in different ways. With most sacrifice decks, you're often looking for ways to maximize the value of the sacrifices. In this deck, the focus is really on the commander who doesn't actually provide much value for sacrificing, so instead it relies on making a ton of tokens cheaply and effectively. A few repeat sacrifice creatures are here to make sure the engine keeps rolling - Bloodghast, Bloodsoaked Champion, Reassembling Skeleton - but I really wanted to lean on tokens a lot more. Let the weenies take over the game, and do so without the high end of token support that archetype might normally get!

Not only does it go off the beaten path a little in regards to these two playstyles meshing together, but there's also a number of cards that focus more on buffing individual creatures. This is obviously because Wilson relies on attacking and bringing the beats on his own. Running Cultist of the Absolute helps, but a 5/5 with a bunch of keywords isn't necessarily going to be enough to get you all the way there. You need a little more oomph, and that's where these pump effects come into play.

In reality, almost all of them are equipment. These are naturally the best repeatable ways to buff up your creatures. Many of the Sword of X and Y cycle make an appearance here as is customary, but so too do we see the likes of Hammer of Nazahn and Sword of Hours for some pretty substantial buffs. Basilisk Collar gives some very relevant keywords for our keyword soup bear, while Skullclamp can draw cards off tokens and power up in a pinch. The big ones I love are Scepter of Celebration and Wand of Orcus, both of which make tons of tokens whenever your creature deals damage. Beyond the equipment, there's also a couple auras. Bear Umbra and Gaea's Embrace provide big buffs and strong effects, while Journey to Eternity can ensure your creatures keep coming back.

There're so many ways to make tokens, though, that you won't always need to go in so deep. Think of a token making planeswalker and it's in here. Presence of Gond and Sprout Swarm? They're here too. Newly reprinted Creakwood Liege and Bitterblossom? They're in this deck as well. I even included some less used cards like Lathril, Blade of the Elves. Most people know her as an awesome commander, but I never see people talk about her in the 99. Here, though, she's really sweet at making sac fodder for your commander. Slap your Wand of Orcus and Scepter of Celebration on her as well as any other equipment and you'll have tokens for days.

He may not have made for a rogue the same way as the original Sir Bearington, but Wilson does a good job as a deck on his own. I love this awesome bear and can't wait to see what shenanigans he gets himself into. There's bound to be plenty of other ways to play with him and build him as well, as there are plenty of solid backgrounds that can work with Wilson. No matter how you build it, though, it'll be sure to be a grand time at your next Commander night. Just make sure nobody finds out that you're a bear in the process.